Most Vegetarians Return to Eating Meat due to Failing Health 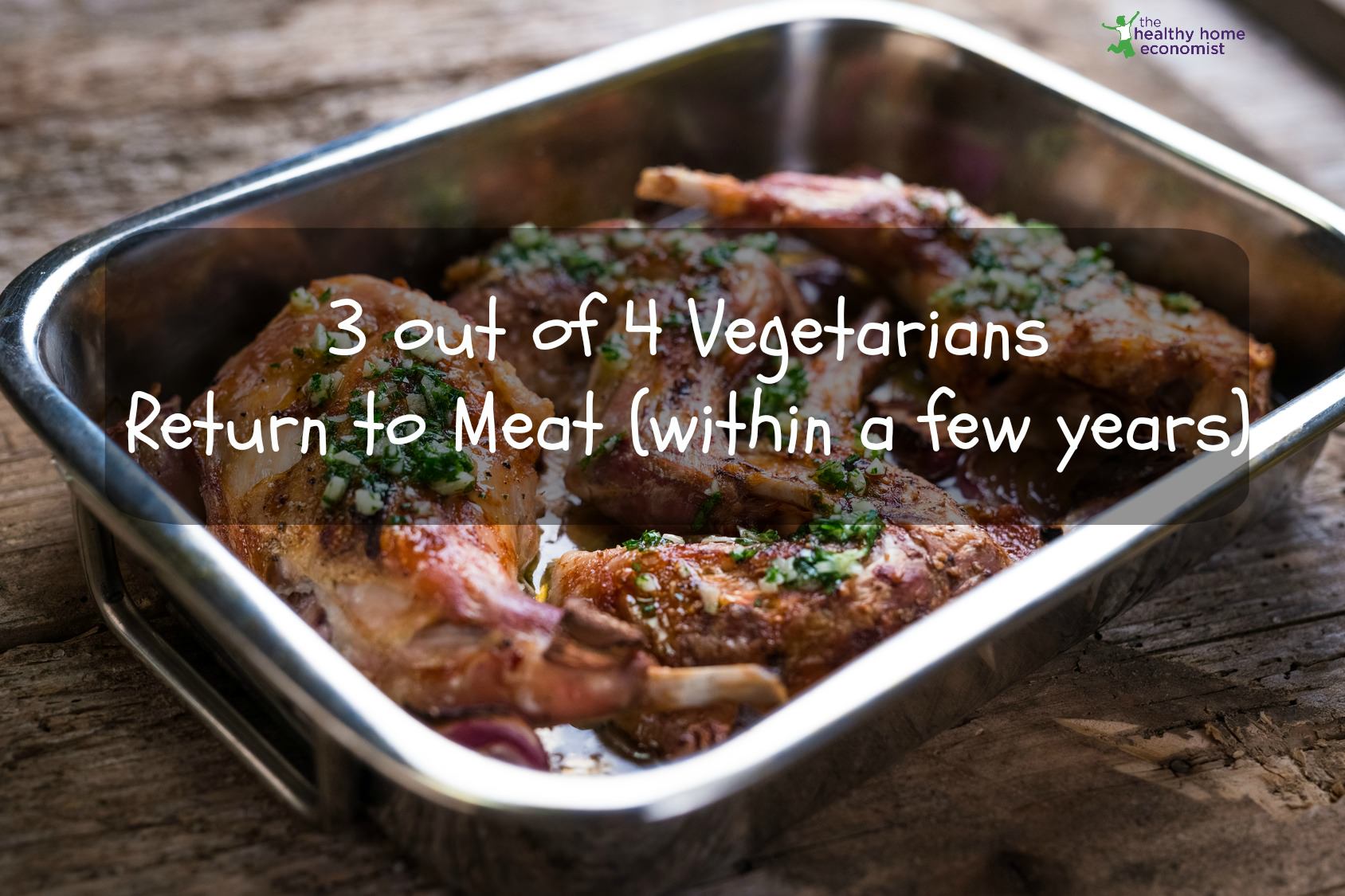 It appears that for the vast majority of vegetarians, abstaining from meat is only a phase rather than a permanent life choice.

According to Psychology Today, roughly 75% of vegetarians eventually return to eating meat with 9 years being the average length of time of abstinence.

The most common reason former vegetarians cited as the reason they returned to meat was declining health. One vegetarian turned omnivore put it very succinctly:

I’ll take a dead cow over anemia any time.

Other former vegetarians cited persistent physical weakness despite eating a whole foods plant based diet while others returned to meat at the recommendation of their doctor.

Another big reason that vegetarians returned to meat was due to irresistable cravings. This occurred even among long term vegetarians.  Respondents talked about their protein cravings or how the smell of cooking bacon drove them crazy.

I just felt hungry all the time and that hunger would not be satisfied unless I ate meat.

Another put it more humorously:

Starving college student + First night back home with the folks + Fifty or so blazin’ buffalo wings waiting in the kitchen = Surrender.

Even the 2017 Netflix documentary What The Health was unable to name a single vegan population group that was successful long term!

About half of vegetarians originally gave up meat for ethical reasons. Pictures of confined animals standing on concrete in their own excrement and the stench of factory farms on country roads from 5 miles away is no doubt plenty of reason to turn away from meat.   Some former vegetarians, however, have recognized and embraced the grassfed movement back to sustainable and humanely raised, cruelty free meats as a real ethical alternative.

Some of these converts back to meat view buying grassfed beef and other sustainably raised animal foods as a new form of activism similar to their boycott of factory farmed meats when they were vegetarians.

Berlin Reed, a long term vegetarian with the tattoo “vegan” on his neck is one of these. Now known as “the ethical butcher”, he believes that promoting customer contact with butchers which has been lost in recent decades with the rise of factory farming is the key to an improved and sustainable meat system.

The article in Psychology Today ended on a baffled note with the author wondering if meat eating could potentially be in our genes?

I submit that the results of this survey are not surprising and are in fact a testament to the research of Dr. Weston A. Price. Dr. Price traveled the world in the 1920s and 1930s visiting 14 isolated cultures in the process.

During this adventure which he documented in great detail with amazing pictures in his masterpiece Nutrition and Physical Degeneration, Dr. Price concluded that while the diets of these natives varied widely, nutrient dense animal foods high in the fat soluble vitamin A, D, and K2 (also known as Activator X) were the common denominator. Consumption of these animal foods were revered in these communities as they bestowed vibrant health, easy fertility, healthy children, and high resistance to chronic and infectious disease.

However, he could not deny that the health of the indigenous omnivores exceeded that of the vegetarian cultures. Those consuming a wide variety of marine seafoods exhibited the most vibrancy of all.

And, while you’re at it, make sure it’s grassfed because even meat eaters hate factory farms!

Beating a Humane Retreat Back to Meat

Why Dietary Dogma Is a FAIL