Blood: The Gift of Life and Health 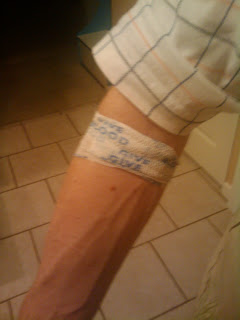 My husband gave a pint of blood at the mall bloodmobile today. Given my husband’s very clean whole foods diet, my first thought when he told me about it was, “Wow, that’s some lucky person who gets that blood!”

I’ve often thought that if I ever needed surgery, I would most definitely bank my own blood or members of my immediate family’s blood ahead of time.

The thought of receiving the blood of some junk food junkie is very unpleasant indeed.

Given that Westerners spend 90% of their money on processed food makes the probability of receiving that type of blood in a crisis quite high.   There’s no doubt in my mind that getting the donated blood of a person eating a conventional, modern diet would cause a substantial increase in convalescence.

The patient, if used to a pure, nutrient-dense diet under normal circumstances, would likely experience some really bad headaches and other unpleasant symptoms as the body rids itself of all the toxins in the donated blood.

If a loved one is in need of blood on an emergency basis, it seems to me that it would be a good idea to contact friends who eat a similarly good diet to give blood if at all possible.

Certainly, the blood one gets in such a situation can dramatically affect the outcome. Hepatitis and AIDS are not the only dangers in receiving the blood of strangers. Making the extra effort to get healthy, toxin-free blood for a loved one in an emergency health crisis can go a long way toward ensuring the outcome is a positive one with as rapid a recovery as possible.

A recent issue of Wise Traditional Journal featured an article about a pilot study comparing the live blood cell analysis of folks eating a whole foods-based, traditional diet with others eating a conventional, modern diet. The study concluded that the subjects eating the whole foods-based, traditional diets had significantly less blood coagulation and clotting as compared with the subjects on a conventional, modern diet.

Since the rapid onset of blood coagulation and clotting is typically associated with higher levels of inflammation, it seems logical to conclude that the subjects eating the modern diets were suffering from an enhanced immune response which biochemically translates into inflammation.

In essence, a modern diet of processed foods containing a plethora of unnatural and damaging substances seems to provoke an inflammatory immune response that leads to rapid coagulation and clotting of fresh blood samples. The pictures included with this study tell the tale far better than words.

In the future, it wouldn’t surprise me if inflammation markers in the blood are somehow measured and potential blood donors are turned away if they exceed a certain limit.

Unfortunately, enforcement of such a requirement would most likely stretch donor blood supplies even further.

In the meantime, it seems prudent to have a list of potential donors who eat a traditional diet in mind in case someone in your family ever needs blood. The odds of getting healthy blood from a blood bank in an emergency are not in your favor.

Why Dietary Dogma Is a FAIL