This is Your Body (and Brain) on Gluten 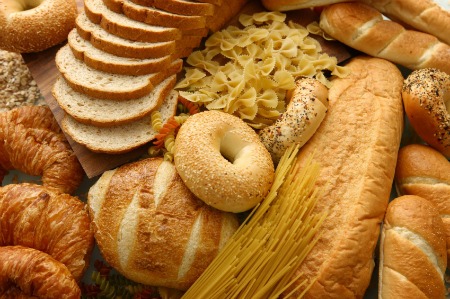 “You should consider eliminating all gluten and dairy from your diet for 3 months.”

Those words hung in the air like an alien spacecraft hovering between us.

When I had the good sense to consult a naturopath after my diagnosis with postpartum thyroiditis, this was the backbone of her recommendation to me. To me, as a psychiatric fellow, 9 years into my medical training, gluten had no relevance to the non-celiac population.

Celiac disease was a rare and unfortunate affliction that made living a “normal” life impossible because of the strict prohibition on, what seemed to me at the time, all food. Raised on classic Italian pastas, lasagnas, and paninis, and a NYC pizza and bagel-ophile, I honestly couldn’t conceive of what I would eat. Fast-forward five years, several hundred medical journal articles, conferences, seminars, and a personal health revolution later, and I am now convinced of the imperative for all people to eliminate this inflammatory food from their lives. I plan to detail — be forewarned: science to follow — the information that made me change my tune on this seemingly innocuous, but quite ubiquitous “food”. Here’s the goods in 1500 words:

We Know Why and How it Hurts You

Sometimes, as I read a medical paper, I get this euphoric rush that makes time seem to slow down (nerd alert). I grip the pages a bit tighter and I savor what is to come because I know that I am experiencing paradigm-shifting information, first hand. When I read this paper by Alessio Fasano in 2011, I knew the processed food industry was going to have to think fast to get out from under this knowledge. In a feat of scientific brilliance, he connected the dots for us and explained the following: 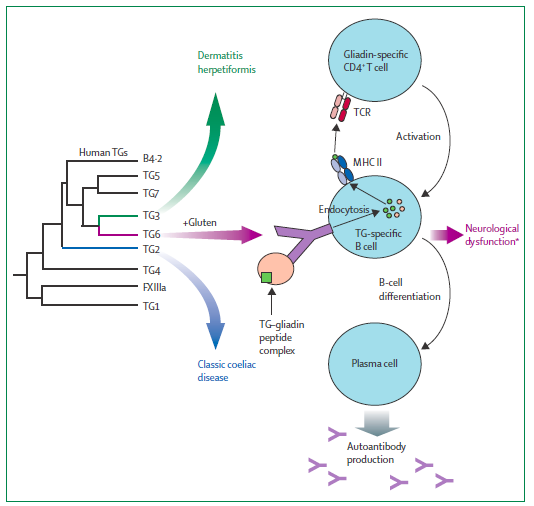 The nature of this immune response is becoming better elucidated. Here are some important conceptual players:

This is an immunologic concept that appears to lie at the root of a lot of what ails us in this world full of foreign particles. The immune system reacts to unknown/novel compounds through the innate system, which is mediated by white blood cells including macrophages and dendritic cells, complement cascades, natural killer cells, and cytokines. This arm of the immune system instructs the “learned” or adaptive system, which employs B cells and T cells to build antibodies that continues to re-recognize the offending agent.

Once gliadin peptides in gluten have breached the gut mucosa, they can stimulate production of an array of antibodies and other tissue impairing agents:

Gluten is a Drug

Independent of the brain effects already discussed, gliadin peptides may travel through the bloodstream can stimulate opiate receptors in the brain resulting in their being termed gliadorphins. The effects of this stimulation may have wide-ranging psychiatric manifestations, not the least of which is the addictive potential of these foods. Those eating high gluten diets can expect to undergo 1-3 weeks of withdrawal symptoms upon cessation. This type of relationship with a food raises flags for this psychiatrist!

You may have sprinkled wheat germ on your cereal for a little health boost or even been recommended sprouted grain bread as a wellness intervention sanctioned by gurus everywhere. These foods contain the highest and best-studied levels of lectin, an anti-nutrient and partner in crime to gliadin peptides in wheat, barley, and rye, but present in many foods and most in grains, legumes, and dairy (and notably genetically modified foods designed to increase lectin content for pest control). They are the plant world’s natural defense, the thorn on the rose meant to inspire regret in those who deign to feast on them. Lectins promote intestinal inflammation and permeability, and then cause wide-spread and varied organ damage by binding with sugars in body tissues. Lectins can be minimized but not eliminated by processing/preparation of grains and beans, and is one of the reasons white rice is recommended over brown.

One of the primary reasons that I, and many educated others, believe that genetically modified foods are the death by one thousand cuts of modern man is because of their impact on the gut. Bt-toxin and glyphosate are two poisons heavily employed in the production of genetically modified crops. Bt-toxin is used in corn as a “natural” pesticide the American public has been assured does not affect the human body. Its perforating effects on insect digestive tracts does not appear to be limited to these pests, as this toxin has been found in fetal circulation (implying that it obviously violated the gut barrier of pregnant women consuming these products).
Herbicides such as the heavily employed RoundUp, have now been revealed to have active bacteria-killing and inflammatory effects in our guts, changing our microbiome with every dose we consume.

Vegetable oils, soy, corn, and animals consuming corn are a ubiquitous part of the modern diet that likely perpetuates gut dysfunction that then facilitates the immune-based effects of gluten exposure.

The limitations of currently available conventional testing are very real as most physicians who do a “Celiac panel” are only testing for alpha gliadin, tissue transglutaminase 2, and endomesial antibody. As discussed above, in a grain consisting of 6 sets of chromosomes, capable of producing greater than 20,000 proteins, this testing may just be too small a window into a very complex space.

Some degree of gluten reactivity is thought to occur in up to 80% of the population and is driven by shared and distinct immune response mechanisms. Response to gluten free diets in placebo-controlled trials and inflammation in the guts of non-Celiac patients, even without gliadin antibodies (such as in this study of exposed non-Celiac patients) argues for the universal effects of this food, and the individuality of our immune responses accounting the variations in severity and presentation. This paper is an incredible review and is named on my desktop, “The Mother of all Gluten Papers”, if you’d like to delve into the topic and references.
Celiac incidence has increased more than 4 fold in the past 50 years which may be attributable to the increased gluten content of wheat secondary to hybridization techniques, increased consumption, combined exposure to a number of environmental toxins, and associated microbiome changes.

As Sayer Ji of GreenMedInfo.com discusses here, it is possible that Celiac Disease is an adaptive, symptom-producing response to an environmental toxin we, as a species are not meant to consume. The rest of us are having vague, cumulative malaise and immune-mediated effects that we have more difficulty associating to the source — consuming grains. I’m here to help expedite your healing.

There are many wonderful and freely available guides to converting to a gluten free life, but the basic principle is to eliminate rye, barley, wheat, and unspecified oats. The difficulty is in identifying the hidden sources of gluten in sauces, condiments, soups, and flavorings. Caution: it’s also found in many meat substitute products such as seitan. Essentially, going gluten-free should mean eliminating processed food from your life, which is why I have a low threshold to also recommend elimination of co-reactive foods like dairy (casein), corn, soy, and in some cases legumes (including peanuts), and gluten free grains like rice and millet.

After gut healing, quinoa, amaranth, and buckwheat may be less stimulatory as they are technically dicots and may not overlap as much with monocot grains. For emergencies, the enzyme DPPIV is available over the counter and may help aid in the digestion of gluten grains with “accidental” exposure.

Here is a great guide to pesticide free shopping, and a guide to avoiding genetically modified foods.
Armed with this information, I’m hoping that those suffering from neurologic, psychiatric, gastrointestinal, or otherwise undiagnosable health concerns might consider this palliative intervention. It may be the last prescription you’ll ever need.