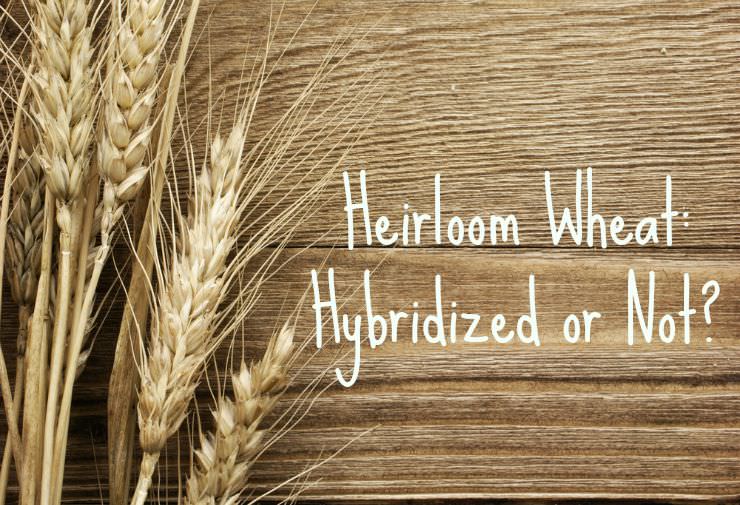 Whether wheat is healthy or not seems to confusing a lot of people these days! A common question is, “What about heirloom wheat varieties consumed for thousands of years?”

As a result, interest is growing in the ancient wheat known as einkorn, the only completely nonhybridized form of wheat on Planet Earth. This is wonderful, as reviving the foods and preparation methods of our healthy ancestors is the most basic key to recovering wellness in this modern age filled with nutritional half truths.

The kitchen is where it’s at from a prevention and health maintenance perspective! Unfortunately, there seems to be quite a bit of confusion pertaining specifically to the many varieties of wheat available to home bakers and their hybridization status.

For example, this comment below on an article about the good gluten in einkorn pertained to the heirloom variety known as White Sonora Wheat. This variety was introduced by a Jesuit priest name Eusebio Francisco Kino in the 1700’s in the Sonoran region of Mexico and Southern Arizona. It was a staple for the western United States and particularly California for almost 200 years. It is also one of the oldest surviving heirloom wheat varieties in the world.

I’m curious how Einkorn compares to ancient White Sonora Wheat? Anyone able to give a technical comparison?

Another question regarding heirloom wheat was emailed to me recently. It pertained to the heirloom wheat (also referred to as heritage wheat) variety known as red fife, the oldest known form of wheat grown in Canada. This wheat is named after David Fife. The seed came from Scotland to Canada in 1842 and is believed to be a relative of the Ukranian heritage wheat known as Halychanka.

Einkorn is not the only non hybrid wheat on the planet. Red fife wheat is nonhybridized.

The certainty of this person’s statement was troubling as she had obviously been given wrong information possibly by a heirloom seed company.

In addition to Red Fife, Halychanka, and White Sonora Wheat, there are many other heritage or heirloom wheat varieties around the world depending on the particular geographical location.

Here’s the bottom line to remember about heirloom wheat: these varieties date back a few centuries as opposed to einkorn which dates back many millennia.

Heirloom Wheat: Too Many Chromosomes to Be Unhybridized

It is true that heirloom wheat varieties are potentially easier to digest than modern wheat. This is because they did not undergo the aggressive, irradiating, gene mutating technology that drove hybridization during the Green Revolution. This period took place from the 1940’s through the late 1960’s. However, they are hybridized nonetheless.

This is easily proved scientifically by examination of the sets of chromosomes each wheat variety possess.

Red Fife, for example, is a descendant of spelt, a sub-species of common wheat, Triticum aestivum. This means red fife has 6 sets of 7 chromosomes for a total of 42.

Emmer, another wheat variety sometimes called farro and incorrectly believed to be unhybridized, has 4 sets of 7 chromosomes for a total of 28.

Kamut and Durum often used to make bulgur are both descendents of emmer. Therefore, they are hybridized as they also have 4 sets of 7 chromosomes.

Truly unhybridized wheat has only 2 sets of 7 chromosomes, for a total of 14. The only wheat variety that meets this scientific definition is einkorn.

Einkorn is the only wheat variety on Earth that has 2 sets of 7 chromosomes each (male and female) which indicates a completely unhybridized state.

Now that we’ve got the hybrid versus nonhybrid wheat thing straightened out, one more thing need clarification.

No Variety of Wheat is GMO

The rumor that wheat is genetically modified needs to stop being repeated!

Wheat is NOT currently genetically modified! It is true that unapproved GMO wheat was discovered growing in Eastern Oregon in 2013. However, genetically modified wheat is NOT approved for use in the food supply anywhere in the world as of this writing. Monsanto reached a $2.4 million settlement with Pacific Northwest wheat farmers over the contamination. Hopefully, this situation is no longer occurring!

Bottom line? Hybridization is NOT the same as genetic modification (1).

Heritage Wheat Probably Not OK for the Gluten Intolerant

Are you are non-genetically gluten intolerant? Are you seeking a variety of wheat to eat that is easily digested? If so, try einkorn first. Using heirloom wheats like Red Fife or White Sonora Wheat is not likely to produce any improvement.

The brief story below from Carla Bartolucci, author of the fanastic cookbook Einkorn: Recipes for Nature’s Original Wheat, hopefully describes why.

When we first moved to Italy, my neighbor was organically growing a comparable type of Italian heritage wheat [to Red Fife] at his farm and this is the type of wheat I started baking bread with, but my [gluten intolerant] daughter did terrible with it.  Sensitivities aside, heritage wheats or landraces are varieties that did not undergo the aggressive breeding that occurred during the Green Revolution and thereafter.  Durum wheat, which is a descendant of emmer, which only has 4 sets of chromosomes, is believed to be more digestible (according to some researchers). Before finding einkorn, I fed my daughter emmer, which is available in Italy, and still her symptoms remained severe.

The good news is that Carla’s daughter does fine with einkorn. This is true even though she cannot eat heritage wheat varieties without severe symptoms.

Please be very careful when believing stories of this or that heirloom wheat variety being unhybridized. Only einkorn is unhybridized. All other wheat varieties even those used for centuries contain a more complex gluten structure likely to trigger symptoms.