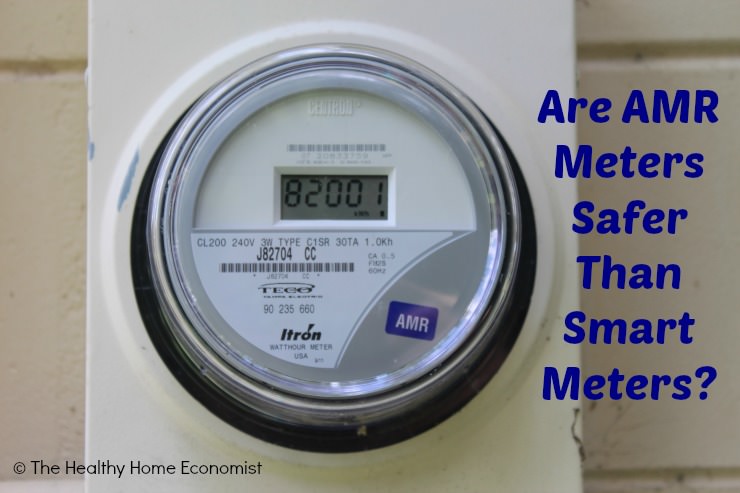 The adoption of digital technology by power companies over the past ten years has occurred with lightning speed. It has happened so fast, in fact, that it has proven difficult for consumers and businesses to keep pace with the trend in order to secure their right to retain analog meters at their home or residence if desired.

AMR, sometimes referred to as ERT, provides a one-way wireless communication for utility companies, whereas smart meters have a two-way capability via connection to the SmartGrid.

Why would a consumer want to keep an old fashioned analog meter and forgo the improved technology offered by AMR or smart meters?

The primary reason is dirty electricity and overexposure to EMF radiation.

An increasing number of people are finding that exposure to dirty electricity triggers or exacerbates health problems. While the effects of dirty electricity cannot be smelled, touched, seen, or felt, it is nonetheless very real and problematic for those who experience it.

The health effects of dirty electricity were first identified as early as the 1950s in rural areas when the behavior and feeding patterns of livestock were negatively affected by stray voltage caused by poor grounding and lack of utility infrastructure. In humans, the symptomatic effects can vary widely but commonly include:

I experience trouble getting enough deep sleep when I am exposed to excessive wireless radiation, so much so that I have resorted to using an herbal supplement to help me sleep in hotels. I never have trouble sleeping at home (we shut off the router at night and live in a semi-rural area with little EMFs) or when camping. I only started to experience trouble with deep sleep in hotels in the past few years since the widespread adoption of wireless technology. When I was staying in Manhattan last spring, there were so many sources of wireless devices around me (over 100, no joke … I counted them when I fired up my laptop and took a look under the connection settings), I literally felt like I was being lightly zapped as I lay in bed trying to sleep. While not painful, it was definitely annoying and interfered with my rest.

Lest you think that EMF sensitivity is nothing to be concerned about, note that the country of Sweden has formally acknowledged issues with dirty electricity as a legitimate disability which affects at least 3% of the population. In addition, doctors in Switzerland have concluded that 5% of the symptoms their patients’ experience could be traced to the negative effects of dirty electricity exposure.

Forward-thinking companies are beginning to take note as well. The Weston A. Price Foundation has successfully opted out of a smart meter for its Washington D.C. office due to health concerns for its employees, albeit one of less than a dozen to do so in the entire District of Columbia.

While most people are aware that the smart meters that have been relentlessly installed around the nation (usually without customer permission and despite verbal or written protest) are a huge source of dirty electricity exposure, AMR meters have, for the most part, remained under the radar.

As mentioned above, AMR meters transmit data using a one-way radiofrequency. The radio signal is picked up by a “collector” inside a meter reader’s vehicle. This is similar to the operation of a garage-door opener. AMR technology is different from two-way meters, which are sometimes referred to as “smart meters”, but is it any safer?

My own home had an AMR meter installed without my permission some years ago. Tampa Electric began rolling out the AMR devices in 2003. The one way AMR devices provide the following conveniences according to TECO’s website:

While definitely not as bad as a smart meter, AMR meters can still be problematic for those who are sensitive to the effects of dirty electricity. According to the Smart Meter Education Network, digital meters universally have the following problems:

Digital meters—whether or not “smart”—cause dirty electricity to flow through your home’s wiring. The problem is what is called the “switched mode power supply.” Switched mode power supplies are used to run the digital meter (whether a smart meter or a radio-off opt-out smart meter). In order for a smart meter to be powered, the 240 volts coming off the power line to the meter must be stepped down to 4–10 volts. A switched mode power supply is the device used to step down the voltage from 240 volts to 4-10 volts. This generates an enormous amount of what is commonly known as “dirty electricity” and referred to by electricians and electrical engineers as “voltage transients,” “voltage harmonics,” “line noise,” and “power quality issues.”

In sum, whether your power company wants to install an AMR device, smart meter, or opt-out meter (smart meter with the wireless turned off), you need to insist on retaining your old analog meter to avoid the effects of dirty electricity on your health.

Having a smart meter adds the problem of emissions from the device itself. The closer you are to the smart meter, the more emissions exposure. The effect is similar to the radiation dangers of a cell tower when in close proximity.

Every foot away from a smart meter makes a significant difference. Having a smart meter installed on the outside wall of your bedroom would be the worst-case scenario, in other words. This article describes how to protect yourself from a smart meter if you already have one installed and are having difficulties getting your power company to cooperate with its removal.

How to Eliminate Dirty Electricity from an AMR Meter

I have only just discovered that the AMR device installed at my home is generating a dirty electricity problem for my family. I had erroneously thought that because it wasn’t a smart meter, it wasn’t a problem. While the problem with an AMR is certainly much lower than with a smart meter, I do intend to petition our power company to replace it with an analog meter. This is a good move anyway, given that my power company has stated on its website that the long term direction of the company is toward two-way smart meters, which I definitely do not want to be a part of.

In the meantime, until the analog meter is re-installed, flipping the breaker switch at night will eliminate the problem of dirty electricity surging through the house from an AMR meter. And, beware of some power companies that are claiming that the devices they are using are AMR, when they are, in fact, smart meters that communicate with the utility every 30 seconds or via collection towers. As of this writing, one power company in New Hampshire and another in Arizona are apparently guilty of using this ruse with customers with others likely doing the same.

Another confusing tactic is the many acronyms that power companies use to describe SmartGrid digital technology. If it isn’t an analog meter, you don’t want it attached to your house if you can possibly avoid it. You don’t need a PhD to make an informed decision.

The bottom line is that only analog meters are completely safe with no emissions or dirty electricity issues. AMR, while less problematic than smart meters, still poses a health risk long term. Smart meters are the absolute worst with constant emissions from the device itself (like a cell phone tower attached to your home) as well as surges of dirty electricity through the internal wiring of a residence or business.

How to Monitor and Reduce Your EMF Load

If you are interested in monitoring and ultimately reducing your radiation load from all the digital devices in your home environment, this can be assessed using this measuring device. This inexpensive, handheld gadget is particularly helpful for identifying EMF hotspots in your home so that you can move routers and other wireless devices to different locations (or eliminating some entirely like wireless baby monitors) and adjusting lifestyle as necessary to ensure, at the very least, that sleeping areas are as EMF free as possible.