Easy Baked Lobster Tails (for the best Surf & Turf Ever!)

How to bake both cold and warm water lobster tails in the oven for the perfect taste and texture every time.

Our family prefers a surf & turf menu for celebratory dinners such as birthdays, graduations, and so on.

Since we are sometimes fortunate to have some tails in the freezer from lobster mini-season in the Keys, that is the usual choice for the surf.

Since many folks shy away from cooking lobster tails at home because it is an expensive mistake to mess them up (which is fairly easy to do, unfortunately), I thought I would share my method for baking them in the oven so they turn out perfectly every time.

This recipe works well for Maine, South African, or Florida lobster tails. It probably also works for Brazilian tails, but as of this writing, I have not tried those.

We like to pair the tails with a grassfed filet mignon baked in the oven as well. We get them freshly cut from our local butcher.

This surf & turf doesn’t even require the grill if you prefer to stay indoors due to inclement weather!

While this may seem like an expensive meal, it costs a fraction of what you would pay in a restaurant and is better to boot as you can serve with local grassfed butter and your choice of organic vegetable medley.

Then, finish off the meal with a healthy homemade dessert (or two!) that won’t have you down with a headache later.

Even the best steakhouses can’t match that!

Be sure to save those tail shells after dinner to make a quick and easy pot of lobster stock! 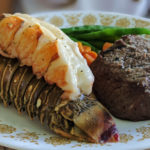 How to bake both cold and warm water lobster tails in the oven for the perfect taste and texture every time.

How to Boil Crawfish on the Stovetop (family style)

How to Make Crawfish Stock