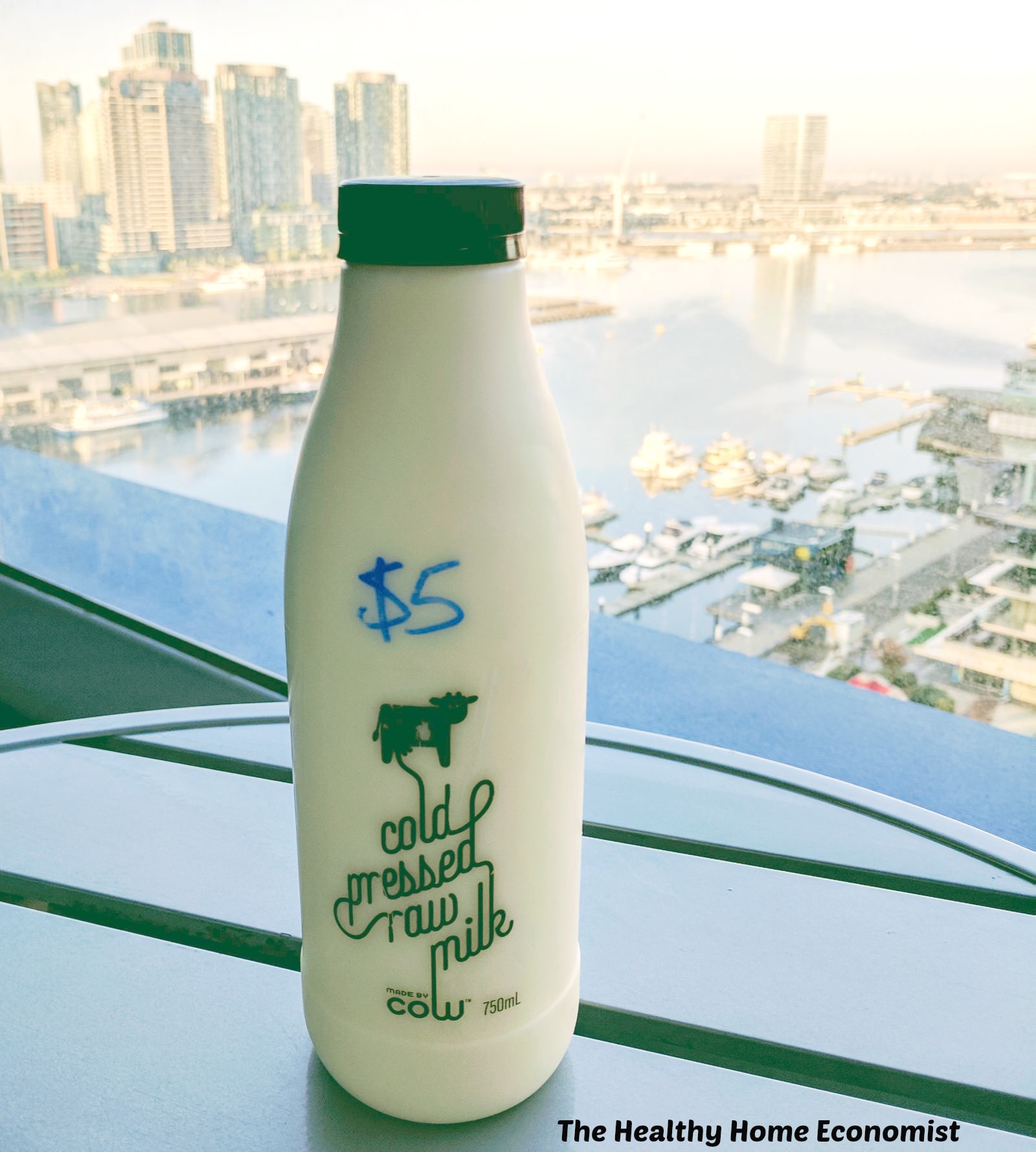 My oldest child who starts college this Fall recently returned from a trip to visit his Grandparents in Australia. Down Under, raw milk is totally illegal. You can’t even buy it at the farm! Rather ironic for a British Commonwealth country where the Queen drinks unpasteurized raw milk and had her dairy farmer Adrian Tomlinson bottle it up fresh and deliver to grandsons William and Harry when they attended boarding school at Eton! (1)

Ah yes, that age old problem of one rule for the nobles and another for the peasants.

For a child raised on raw milk who has never tasted pasteurized (nor does he want to), this presented quite a challenge. He loves his raw milk drinking close to a quart per day. The thought of going without it for his entire visit Down Under was baffling to him. How could a food so nutritious and ancestral be illegal?

In the hunt for a raw milk source, his Grandmother discovered a potential solution – cold pressed milk.

What is Cold Pressed Milk?

Never a people to be kept down, some clever Aussies have patented a new way to process milk so that some of its essential rawness is preserved. This while ensuring that any pathogenic microbes are totally eliminated.

Developed by farmers Stuart and Haley for their herd of jersey cows in New South Wales, cold pressing milk involves using pressure instead of heat to process it. This technique subjects the milk bottles to intense pressure equivalent to taking them six times deeper than the deepest part of the ocean. The intense isostatic cold water pressure compresses both the bottle and the milk inside for several minutes. (2)

These scrappy dairymen dubbed their company “Made by Cow”. They claim that their milk is the “World’s First Safe To Drink Raw Milk.”

But is this milk really raw as marketed on the bottle and company website?

Unfortunately, no it is not.

According to a New South Wales Food Authority spokesperson, the high pressure processing (HPP) used by Made by Cow is already in use around the world for other types of foods. These include juices, applesauce, dips, salsas, meat products and seafood (3).

HPP changes food enzymes in unpredictable ways. But, since they are altered, any food treated with it can no longer be considered raw including cold pressed juice (4). Unfortunately, current food labeling regulations allow it to be marketed as raw. This loophole is similar to the one that allows cheese made from milk heated to just below pasteurization temperature to be labeled raw cheese. In fact, it isn’t “raw” at all.

The good news is that the HPP process doesn’t directly destroy live enzymes like heat pasteurization does. They can survive for 5-7 days.

So if you drink your cold pressed milk within a week of milking and processing, you are going to get some of the essential enzymes. This includes the all important lactase for digesting the lactose (milk sugar) and phosphatase to absorb the calcium among others.

The bad news is that the shelf life of cold pressed milk is far longer than 7 days. In some cases, you may be buying “raw” milk that is weeks old!

Therefore, if you choose to buy it, make sure you know the day the milk was processed. This will ensure you’re actually getting some enzymes for the premium price.

High pressure processing of raw milk destroys all pathogens. This is why Made by Cow is allowed to sell it in retail stores in Australia.

However, one of the tests for successful pasteurization of foods is that all microbes are destroyed both good and bad. It doesn’t matter if heat or pressure was used.

Hence, probiotics are long gone in cold pressed milk. Since this is one of the huge benefits of drinking raw milk, calling cold pressed milk raw is not only misleading, it is downright false.

Worse, these claims by Made by Cow are confusing raw milk drinkers. Several customers from Down Under have already emailed me about why their cold pressed milk left out on the counter won’t clabber like raw milk does.

While we have a zero tolerance policy for pathogens we are not a sterilisation method, so yes, bacteria does remain in our milk. While we have spent our time and money on the food safety aspect of our milk we do intend to analyse the active bacteria in our milk. We will commence this testing shortly and plan to put these findings on our website once we have completed this work. (3)

This answer is extremely misleading! The fact is that no bacteria remain in cold pressed milk else Made by Cow wouldn’t have approval to sell it in Australia. In addition, customers are already discovering that it doesn’t clabber on the counter to make liquid whey and raw cream cheese. It rots just like heat pasteurized milk.

Do not Use Cold Pressed Milk for Homemade Formula

Because the enzymes in cold pressed raw milk are altered and there are no probiotics, it is an inappropriate choice for homemade infant formula.

To make cold pressed milk acceptable for this purpose, first culture into homemade kefir or yogurt. Then use as the base for the baby formula recipe.

In summary, while cold pressed milk is definitely not raw, it isn’t as damaged or as allergenic as milk processed by heat pasteurization.

The partially altered food enzymes are present for about a week after processing. This also indicates that the carrier proteins for the vitamins are not destroyed either. This bodes well for a product that is nutritionally similar to raw milk as claimed by the company.

Another great thing about Made by Cow’s cold pressed milk is that it is not homogenized. This means a distinct creamline is visible when the milk sits in the refrigerator.

Homogenization is almost universally used on heat treated milk – both conventional and organic. It eliminates the natural creamline which hides poor quality, low cream milk from consumer eyes. It also oxidizes some of the cholesterol. While natural cholesterol has many benefits to health, oxidized cholesterol does not and should be avoided.

Made by Cow’s cold pressed milk is also grassfed. It comes from pastured jersey cows that are not subjected to antibiotics or steroids. The farm follows sustainable practices and is accredited as such in the national Fertsmart program.

My son is quite a connoisseur of raw milk having tasted it from a wide variety of farms. Here’s what he had to say about how cold pressed raw milk tastes in comparison to really raw milk:

I have grown up drinking raw milk, and it is my favorite food in the whole world. However, when I go on trips I find the raw milk in other areas sometimes tastes very cow-y or overly grassy. However, I had a much better experience with Cold Pressed Raw Milk in Australia.

I did not have to adjust to the new taste at all. Though it tasted slightly different from my raw milk at home, drinking it was no problem and it tasted great. It saved me from going a long time without my food staple, and I am so happy to share the experience with you. I hope that those of you who are unable to buy raw milk find this option to be satisfying.

Look for cold pressed milk to spread to other farms around Australia and other countries and states hostile to raw milk. My concern is that the misleading marketing will dampen consumer enthusiasm for rolling back antiquated pasteurization laws as the popularity of REAL raw milk continues to spread.

Pros and Cons of Colostrum as a Supplement