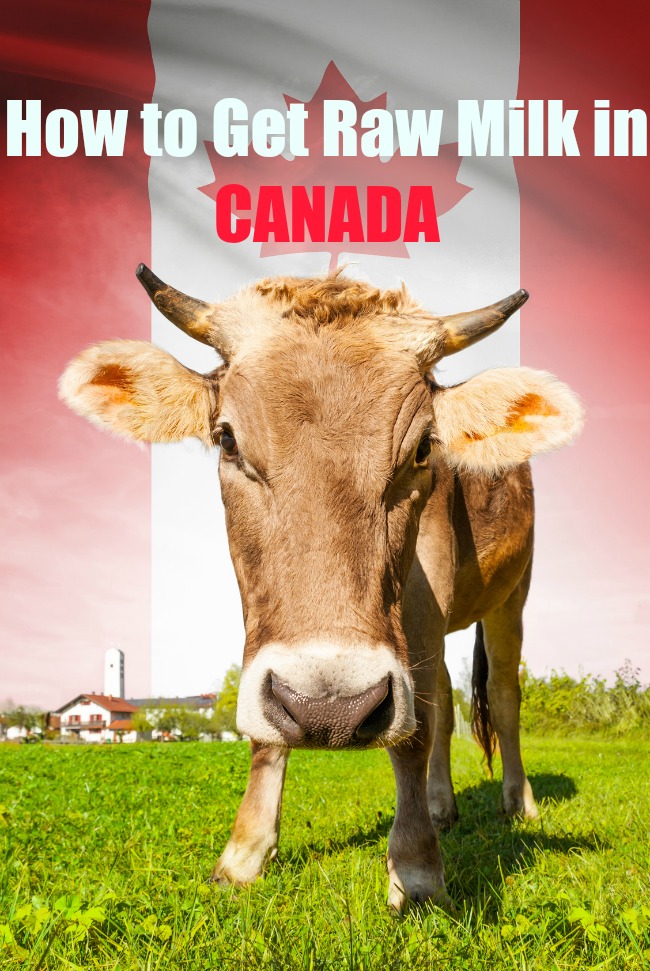 The frustration of Canadians with their stuck-in-the-last-century government for its persistent refusal to legalize raw milk reached a fever pitch recently.

The reason is the surprise legalization of raw milk in West Virginia, the state previously known for the most draconian, anti-raw milk laws in the entire United States!

My email inbox was overflowing with Canadians seeking raw milk when this news broke. Clearly there is a significant demand for raw milk in Canada!

Until now, I didn’t have a good answer for Canadians seeking this simplest and most nutritious of traditional foods for themselves and their families.

Now I do.  Here’s the lowdown on how to get raw milk in Canada easily and legally.

According to National Geographic, 75% of Canadians live within 100 miles of the border with the United States.

Raw milk is completely legal in 12 of these 13 states (and in 42 of 50 states total). The only state bordering Canada that outlaws the sale of raw milk is Montana (um, what are you waiting for Montana?).

What’s more, in 9 of these border states (Washington, Idaho, Wisconsin, Minnesota, New York, Pennsylvania, Vermont, New Hampshire, and Maine), raw milk can be purchased very easily either in a retail establishment or at the farm.

According to the Canadian Food Inspection Agency, a Canadian citizen can legally cross into the United States and purchase the raw dairy of his/her choosing and return across the border without harassment or duties (1).

Here are the exact words for dairy products allowed into Canada from the United States:

up to 20 kilograms per person.

Please note that quantities in excess of $20.00 may be subject to high rates of duty. The Canada Border Services Agency (CBSA) is responsible for determining customs and duties for items coming into Canada.

Notice that in these guidelines, the dairy does not need to be pasteurized.  “Dairy products” is defined generally, which includes dairy products that are raw.

To confirm this interpretation to ensure I’m not passing on incorrect information, I’ve been conversing online with a dairy farmer and raw milk activist from British Columbia. She told me the following and gave me her permission to pass it along via this blog:

Sarah I have crossed the border into Washington, bought raw milk in the grocery store and came back into Canada with no problems at all. I even showed my receipt to the Canadian Customs Border guard and he said “thank you ladies, have a nice day.” I have to stop milking my cow for two months of the year so she can build up colostrum from her next calf so whenever I’m down in the Abbotsford area [near Vancouver, British Columbia] I will zip across the border to buy raw milk.

We are allowed $20 worth of dairy if we only go down for the day. It doesn’t matter what that dairy is, butter, raw milk, cheese, etc.

What’s all this mean? It means that if you live in Canada, you can legally cross into the United States, purchase raw dairy from the store or farm of your choosing, and cross back into Canada without incident so long as the raw dairy is for your personal consumption only. According to the language used by the Canadian Food Inspection Agency above, purchases over $20 are also allowed (up to a maximum of 20 kg/44 lbs per person), but may be subject to high rates of duty. If you wish to avoid fees, take only $20 or less back home to be on the safe side.

Here’s a strategy to consider: Load up your car with peeps (the regs don’t specify that the “person” has to be an adult either) and drive across the border to load up as much raw milk and dairy as you are allowed legally. Raw dairy freezes very well so you can buy more than you will use right away to limit your trips. This article gives you freezing tips for milk and other raw dairy.

For privacy reasons, I won’t be posting the stores or farms that serve Canadians on a regular basis. The website Real Milk has a state-by-state list of farms, buying clubs, and other establishments that carry raw dairy to get you started on your search. If you live in Canada and are using this strategy already, feel free to post your sources in the comments section for others to benefit from.

Hopefully one day soon, the Canadian government will realize that citizens spending money regularly across the border to buy products proven to be safe that should already be legal in Canada is a drain on local economies. Keeping that money in Canada is a better approach for a smart politician who really gets the big picture.