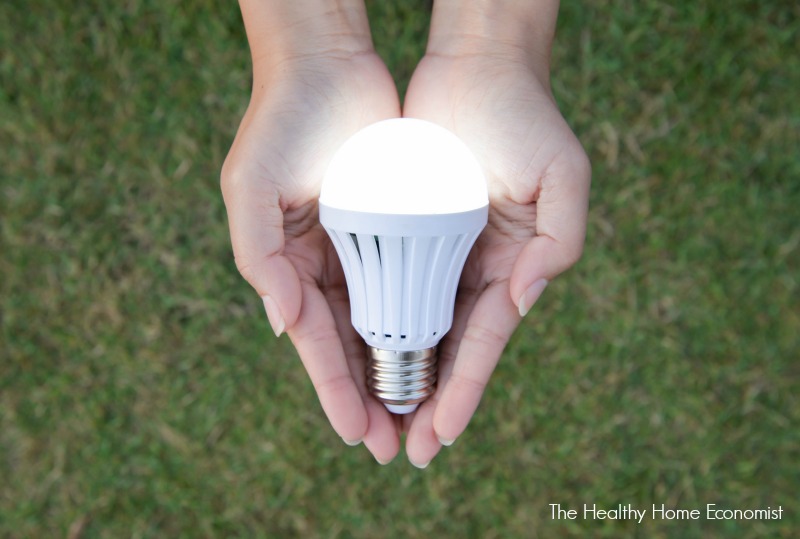 In case you haven’t noticed shopping at your local hardware store, the incandescent light bulb discovered by Thomas Edison has gone the way of the dinosaur. This is thanks to government regulations which encourage greater light bulb energy efficiency. The market for incandescent light bulbs has quickly been replaced by CFLs and LED bulbs in recent years. While you can still find incandescent bulbs, they are typically specialty bulbs with very low wattage that are not ideal for interior home lighting.

Compact fluorescent lightbulbs have the very alarming problem of mercury exposure should one of these nasties ever break in your home. CFLs also pose an environmental threat to soil and water surrounding landfills as few folks recycle their CFLs choosing instead to throw them in the garbage for their unsuspecting garbage collector to have to deal with sans mask and gloves.

What about LED (light emitting diode) light bulbs in comparison? I’ll give you the good news first.

The bad news is that they are not in any way a better choice than CFLs for your health or the environment.

How depressing!  It seems stocking up on your incandescents is the only way to go at this point to tide you over until a nontoxic solution becomes commercially available – besides candles, that is!

A study by the University of California Irvine found LED bulbs to be loaded with lead, arsenic, and/or nickel. These heavy metals are used to create the LED artificial light. This is quite different compared with the harmless, heated filament in traditional incandescent bulbs.

Fortunately, unlike CFLs, LED light bulbs are not as fragile or likely to break in the home environment, However, LEDs still need to be treated as hazardous waste. Broken bulbs in landfills threaten soil and groundwater with contamination.

Similarly, anyone unfortunate enough to break a LED bulb is advised to don a mask and gloves and sweep up the hazardous mess with a specially made broom.  The team of scientists also recommended safety gear for crews who respond to car crashes as LED technology is utilized for car headlights and traffic lights now.

LED Bulbs and Too Much Blue Light

Perhaps the worst thing about LEDs is the artificial light pollution they create in a home or work environment.

Standard white LED bulbs create light that favors the blue spectrum. Exposure to this type of light after sundown disrupts circadian rhythms to the detriment of the deep, restorative sleep we all need. This is why sleep experts recommend a “no screens” policy especially for children 1-2 hours before bed. Too bad they don’t include warnings against using LED bulbs in the home too. Most parents are completely unaware how dangerous LED light is to long-term health. More on how too much blue light is wrecking our sleep in this article on biohacking your way to deeper slumber habits.

In essence, using LED bulbs introduces the serious problem of light pollution into your home environment. It’s a very unhealthy, unbalanced type of light to be exposed to on a daily basis particularly after sundown.

The only upside to LED bulbs is when you use them on the outside of your home. The cooler blue light tends to not attract as many insects!

What to Do if you Can’t Get Away from LED Light Pollution?

What to do if you can’t get away from LED light pollution because of frequent traveling or working late in an LED lit office?

Some people I know are donning special blue blocking glasses at sundown to combat the problem. These glasses prevent LED blue waves from reaching the eye so they don’t disrupt circadian rhythms. The bonus is that using these glasses allows you to work on your computer, watch TV or use your phone after sundown without sleep disruption too.

Do you use LED lightbulbs in your home? Will you be switching back to old fashioned incandescent bulbs now that you know they are bad for your health?