How to Biohack Your Way to a Better Night’s Sleep 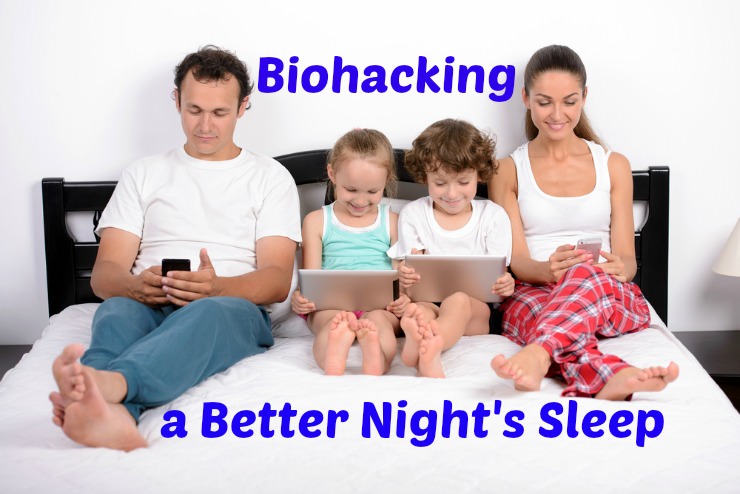 Biohack is a term used to describe the management of one’s personal biology using an approach that employs a combination of nutritional, medical and even electronic solutions.

In this particular article, a clever biohack is revealed that can help all of us get better quality sleep despite the typical and frequently necessary use of LED devices after sundown, sometimes even immediately before bed!

The Biological Danger of Blue Light after Dark

If you spend any time during your day gazing at any sort of screen, you’ve probably read that the blue light that is widely used in pretty much all electronic devices including phones, tablets, laptops, and TVs represents a serious threat to a good night’s sleep and long term wellness.

The term “blue light” refers to the blue component in ordinary white light that affects our circadian rhythm by suppression of the production of melatonin, the sleep hormone. The cause is the photoreceptor in our eyes, called Melanopsin that is sensitive to a narrow band of blue light in the 460-480nm range. When this photoreceptor “sees” blue light, melatonin production is negatively affected for up to 4 hours!

By contrast, red light is good for the eyes by improving mitochondrial function in the retina.

Excessive exposure to blue light especially at night is causing more problems than disruption of natural circadian rhythms and insomnia, however, as melatonin does far more than just make us sleepy.  It is also a powerful antioxidant that research suggests plays a pivotal role in slowing the progression of cancer and other degenerative diseases.  Ailments linked to blue light overexposure include diabetes, breast and prostate cancer, lupus and migraine headaches.

Optometrists are even seeing high levels of retinal stress and eye lens cloudiness in young people that could lead to the early onset of macular degeneration and cataracts.

Here’s what doesn’t need research: 415 to 445nm is super hot [blue] light, and if it’s really focused and brought up close – when you’re talking about a tablet six inches from a kid’s face – it’s got to be significant.

Research out of Harvard suggests that what Dr. Harrison is saying is no exaggeration. Scientists conducted an experiment comparing the effects of 6.5 hours of blue light exposure to exposure from green light of comparable brightness. Melatonin suppression occurred for twice as long from the blue light as compared with the green light. In addition, circadian rhythms were shifted by 3 full hours.

This research gives credence to the notion that we can indeed protect ourselves by either wearing inexpensive orange-tinted sunglasses or by exposing ourselves to dimmer light after sundown.

The problem with orange-tinted lenses is that they block other colors too and can be impractical for use at night. Glasses that block only blue light are pricey and can cost up to $80.

I don’t personally use orange-tinted lenses – I’ve found another solution that is working fabulously well for me.

When I learned about the health dangers of blue light, I was concerned because I do a lot of work in front of a computer screen or from my phone.

While the minimum recommendation is to not use any LED screens at least one hour before bedtime, the truth is that you shouldn’t have ANY blue light exposure after sundown.

That’s right.  None at all!

How in the world could I manage that?  Some of my work is frequently done after the kids are in bed for an hour or two.

What I discovered and have been using is a free circadian rhythm adjustment app that I downloaded to my phone and to my laptop.  I’ve had family members do the same.

For Mac, Linux, iPhones, and iPads, the app is called f.lux (get it for free here).

For Android and Windows users (Chrome browser only), the app is called Twilight (get it for free here).

Another similar app is called Bluelight Filter. You can try this app too although it is different from the one I am using, so I can’t vouch for how good it is (get it for free here).

What these apps do is switch automatically from blue light to a soft, pleasant orange-reddish light filter at sundown. You can make the switch go quickly or slowly when the sun sets and the smoothness of the transition is adjustable based on your timezone. I advise that you make the change quickly, as your body won’t make melatonin for up to four hours after you’ve been staring at a screen with blue light!

It will take you a couple of days to get used to it, but I promise you that when you do in short order, you won’t even notice the change anymore!

Go ahead, download one of these apps right now!  It takes like 15 seconds. You can thank me later.

If this cool tip has you excited, then I recommend you take a peek at the 9 Science-Backed Secrets to Perfect Sleep Webclass below that I taped with Bob Rasmussen, a world-renowned sleep expert.

Bob and I go over a number of tips to help you get a better night’s sleep, biohacking with circadian rhythm apps being only one helpful use of technology to manage our personal biology for the better. Discussion of the importance of a nontoxic mattress like Intellibed is also examined in detail to promote healthful slumber.

It is very important to consider sleep not just as an activity, but as an actual nutrient. Quality deep sleep where you go to sleep quickly, stay asleep all night, and awaken refreshed is one of the three essentials for good health: clean, whole foods, adequate exercise, and quality sleep. If any of these three is missing or subpar, the three-legged stool of health will be wobbly or even topple over.

I hope you enjoy the webinar, and I look forward to hearing your feedback on how the information has given you some food for thought on getting a better night’s sleep.

What is Blue Light from Screens Really Doing to Our Eyes?

Harvard Health: Blue Light Has a Dark Side