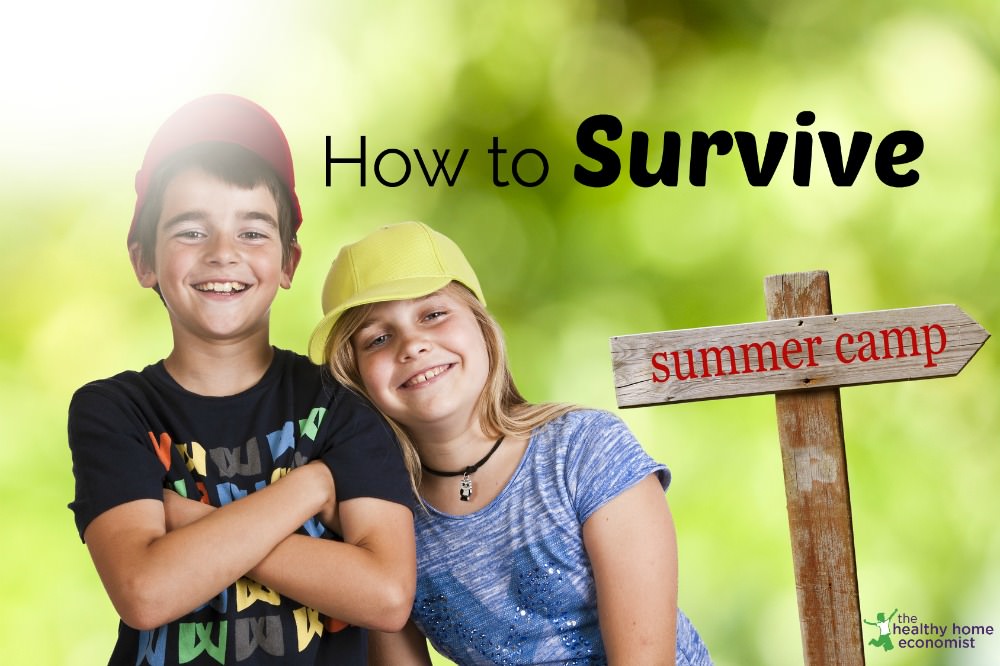 My oldest went off to camp for almost two full weeks last month over a thousand miles away from home. It was the first time he had been away for more than a sleepover at a friend’s house or a couple of days with Grandma and Grandpa, so it was obviously a bit traumatic for Mom.

My son is no dummy when it comes to nutrition. He has learned an enormous amount just watching me prepare healthy, traditional meals day in and day out for years. He knows about the dangers of too much sugar and relying too heavily on grain based carbohydrates in the diet – even if whole grain. He realizes the fallacy of the lowfat diet and loves his butter, cream, eggs, and grassfed steaks.

He is a healthy, normal tween who I frequently refer to as an “energizer bunny.” The kid never seems to get tired, let alone sick. I can’t remember the last time he missed school for an illness or even the last time he had a respiratory infection or a tummy bug.

My son and I had numerous conversations before he left about how he could best survive the camp food experience. To its credit, the camp he attended served quality food mostly made from scratch, not the typical tater tot/chicken nugget processed garbage that is the staple fare of most camps.

The majority of the kids no doubt experienced much healthier eating at this camp than they did at home.   My son was likely one of the few, if not the only child, who ate worse at camp than he does at home.

Despite the cooking from scratch, the camp’s food was still pretty much in line with the hopelessly misguided USDA Food Pyramid. In other words, the meals were grain based carb heavy and very slim on the saturated fats.

Breakfast, for example, typically consisted of pancakes with ersatz, corn syrup sweetened maple syrup (or so my son said .. he said it didn’t taste like real maple syrup) or boxed cold breakfast cereal. Juice was the primary drink available with all meals, though the child could always request filtered water.

The Plan for Surviving Camp Food

The plan my son and I hatched for surviving camp was to seek out and consume lots of butter!  I figured that the camp would at least have access to regular store butter and I told my son to find it and slather it on everything. This, after all, is how I survive traveling and eating in restaurants a lot.  I just ask for the butter and make sure I eat 4 or more pats of it with each restaurant meal. This keeps me feeling full with steady blood sugar for hours so that I don’t go for the sugary sweets while on the road. I figured this would be the primary ticket for survival at camp too.

I also sent with him a bottle of cod liver oil capsules. He knew to take 2 capsules with breakfast and 2 with dinner. He also had his therapeutic strength probiotic – again, 2 in the morning, 2 at dinner. Finally, I sent him some natural vitamin C. These supplements he took quite religiously. He only missed his dose 5 times the entire two weeks. This is an excellent track record for a tween, I think.

When I dropped my son off at camp, it was very much a “see ya later Mom” kind of goodbye.   No tears, no prolonged hugs.   In no way was he concerned that I was leaving him for almost two weeks and that he would be on his own for the first time in his life far away from home.

He is not a “Mama’s boy” by any means. He is very extroverted, gregarious, and makes friends easily.   Neither of us expected him to have any issues whatsoever. I was emotionally traumatized as any Mom would be, but deep down, I knew he would be just fine.

I dropped him off on a Sunday afternoon and did not hear nary a peep from him until late in the evening four days later.

At 9:30 pm a full 4 days later, my son finally called. He was on the verge of hysterical. Sobbing that he wasn’t having any fun and hadn’t made any friends, I knew there was something terribly wrong.  This was just not like him at all.

He told me that he had “no energy” and felt like he needed to sleep all day. He confessed to needing to drink an energy drink or two each day just to keep going. These beverages contained the artificial sweetener sucralose too, which had me very concerned!

He also said that he had suffered from a constant headache for the first 3 days of camp. This from a kid who never gets a headache.

What? The energizer bunny needing energy drinks? Headaches? No fun and no friends? At that point, I knew something was seriously up with what he was eating.

I asked a few questions about his meals and realized that there were no healthy saturated fats available at camp. On the positive side, there were no factory fats either. Olive oil was used for cooking, for example.

A lack of saturated fats was something I had not anticipated at all!  No wonder he was so tired .. with grain-heavy meals and no access to any saturated fats, he had collapsed in an emotional, blood sugar spiking/crashing heap within just a few days.

Kelly the Kitchen Kop to the Rescue

The next morning, I called my friend Kelly, who also just happens to be Real Food blogger, Kelly the Kitchen Kop and explained to her what was happening at camp. She lives only a few minutes from the camp and she quickly volunteered to bring my son some unpasteurized whole milk, pastured eggs, and bacon fat to cook the eggs in right away.

When Kelly delivered the provisions to the camp, she spoke with the camp director and confirmed that there was no real butter anywhere at the camp. I was incredulous! No wonder my son was such an emotional mess!

The camp was very accommodating of my written request to allow my son to eat what Kelly delivered. They followed all required protocol in doing so and it was all very professionally handled.

My son’s first meal with Kelly’s Real Food provisions was Friday lunch. At that meal, he had two glasses of grassfed, unpasteurized whole milk.  He later told me that he immediately felt better and had more energy that afternoon.

He called again Friday afternoon to ask to come home one more time. I told him to stick it out a little longer and that he would be feeling much, much better by Saturday.

He did not call again for the remainder of the camp, although I did talk with one of the camp directors a few days later who indicated that my son had finished all the milk and was in need of more. Kelly again saved the day by delivering another bottle very late one evening after she had been out of town all day!

When my husband picked him up on Thursday the following week to bring him home, he was happy and had made some good friends.   He said that he had fun and was wanting to go back to camp next year.

What a turnaround from the week before!

Now, I realize that part of the turnaround was the emotional and attitudinal adjustment to camp life itself.   However, the positive effect of getting whole, unprocessed, healthy fats back into his diet cannot be discounted.   I fully believe that if Kelly hadn’t been available to save the day, my son would’ve ended up leaving camp early and there would have been no turnaround in the situation.

The moral of this story is to make sure your child has access to saturated fats while at camp.    Don’t just assume, like I did, that plain butter would be available.   Ask the direct questions and save yourself the trauma of a late-night phone call like what I experienced during our camp saga this summer!

If you would like to read Kelly the Kitchen Kop’s take on the camp situation from her perspective, you can read all about it in her post today called I Almost Got in a Butter Fight!

By the way, I had a great time visiting with Kelly when I was up that way last month. Her kitchen is beautiful and you folks are in for a major treat watching her in action in that space when she offers her Rookie Class in the Fall!

3 Simple Ways to Eat Super Healthy on a Tight Budget