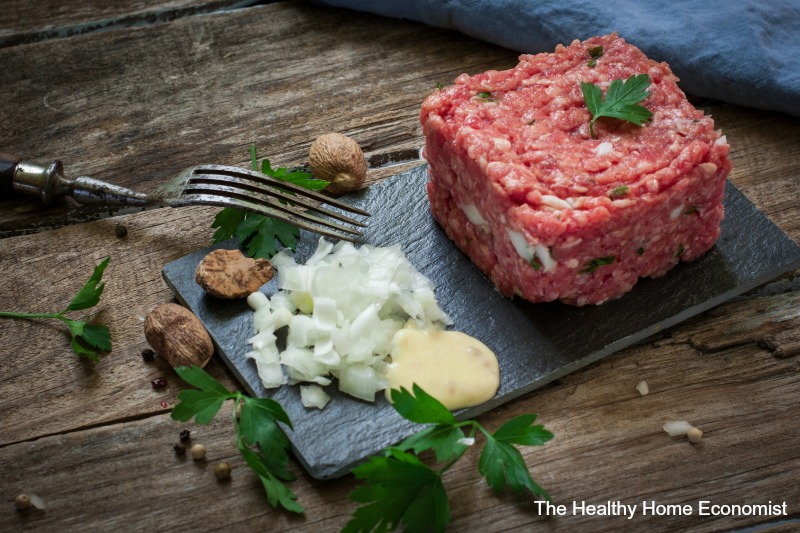 The mere mention of the words “steak tartare” frequently conjures up that hilarious episode of Mr. Bean (U.K.) where he unwittingly orders this popular raw meat dish only to spend the rest of his dinner trying to dispose of it in most amusing fashion. If you haven’t seen this episode and appreciate British humor, I recommend this short clip for a good laugh.

Eating steak tartare needn’t be such a tortuous experience. In fact, this dish is quite delicious and so easy to digest that even those with extremely compromised digestion usually find it a welcome balm on the stomach. Indeed, the French aren’t fools. For centuries, steak tartare has been a traditional French remedy for weak constitutions. During the Franco-Prussian War when beef ran short, the French even turned to making their steak tartare with horsemeat!

Worried about parasites in your dinner meat? This problem is easily solved by freezing the meat for 14 days. The US Department of Agriculture reports that this practice kills off all parasites. Of course, use only the highest quality grass-based meats when preparing a gourmet dish such as steak tartare. This reduces the risk substantially similar to the safety of free range, pastured eggs in comparison to commercial supermarket eggs.

What about the raw egg white included in the recipe below? Raw egg whites contain the anti-nutrient avidin which binds the B vitamin biotin and prevents it from being absorbed. However, the amount of egg white consumed per person is very small considering that multiple servings of tartare are made using a single egg. Thus, it isn’t going to be a problem for most people. If you have experienced issues with raw egg whites in the past, though, feel free to use only an egg yolk in the recipe.

While steak tartare tastes delicious, the soft texture is initially a turn-off for some. This is why I recommend making this dish as an appetizer served on whole grain crackers at first. This is easy to manage if you set aside a bit of the ground beef for a main meal of meatloaf. While the meatloaf or other dish is cooking, whip up the steak tartare. Most importantly, serve it early while everyone is very hungry. This way, they are more likely to try it and like it!

Entice them with a really yummy homemade dessert if they give it a go and take a couple of bites! 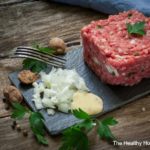 A traditional recipe for steak tartare that is safe, nutritious and incredibly delicious when these guidelines are followed and grass-fed beef is used.

If you prefer not to use brandy, use 1/4 tsp brandy flavoring instead.