How to Season Bone Broth Perfectly Every Time 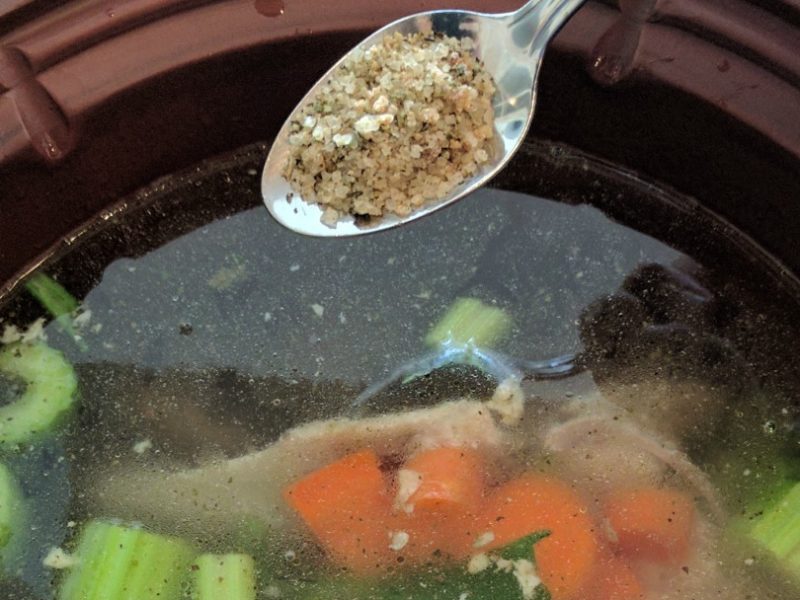 A good friend of mine recently made bone broth for the very first time. She was very excited about it until she took a sip. She texted me that much to her surprise, the carefully prepared broth did not have much flavor!

Tasteless bone broth is a common problem that many newbies to the wonders of ancestral diets encounter. Watery bone broth that doesn’t gel is another common challenge.

If you need some coaching to transform your bone broth from bland to boss, this article is for you!

The first thing to realize when you start making bone broth at home is that your tastebuds need a serious adjustment. Commercial soups, broths, stocks, and bouillon cubes are loaded with monosodium glutamate. This cheap chemical adds lots of synthetic umami flavor but has no nutritional value of its own. What’s more, MSG is a neurotoxin, demonstrated to kill brain cells. Neurosurgeon Dr. Russell Blaylock’s book Excitotoxins: The Taste That Kills outlines all the research on why MSG is to be avoided as much as possible in the diet.

When you first taste properly seasoned bone broth, you will notice the difference. Instead of an overpowering, “so good it has to be fake” type of taste, real bone broth tastes delicious without the synthetic feel on your tastebuds. Industry shills will tell you that there is MSG in homemade bone broth too. Comparing the two is like saying synthetic folic acid and folate, its natural, non-toxic counterpart, are the same thing. They’re not!

Here’s what Dr. Kaayla Daniel, co-author of Nourishing Broth says about that assertion:

I’ve been off MSG for so long now that my nose actually starts to itch if food containing large amounts of it gets near my face. This is how I figured out that one of the most expensive restaurants in our town had started to use bouillon cubes in its famous French onion soup. When I started to eat a bowl the last time I was there a couple of years ago, my nose started to itch. I asked the waiter how they were making the French onion soup these days, and sure enough, bouillon cubes were now part of the revised recipe.

I’m glad I asked! I saved myself a nasty headache by not eating that soup!

How to Optimally Season Bone Broth

The first step to properly seasoned, fantastic tasting bone broth every single time is to include lots of veggies in the simmering process. Be sure to use the best quality organic vegetables you can. Forgo using hydroponic vegetables if possible, as these almost always have poor taste compared with the same organic vegetables grown in nutrient-dense soil.

I’ve had some folks tell me that they use produce that is no longer good for eating to make bone broth. In other words, they throw the veggie bin scraps in there. While this is a good idea to use up all your produce and reduce waste, it isn’t a good idea for creating the tastiest, most nutritious bone broth.

The fresher and better-tasting the vegetables, the more minerals these vegetables will impart to the broth, which translates to our tastebuds as flavor.

If you’ve taken care to include quality vegetables when making your bone broth, the second step is to boil the broth down a bit if it doesn’t pop off the spoon enough at first taste.

To boil down bone broth, simply remove the lid, set the heat to medium, and wait. I usually set the timer for 15-minute intervals with the goal of reducing the liquid by half. This usually does the trick to enhance the bone broth’s flavor to a point where it is ready to use as a base for soup or sauces.

If after boiling the broth down by half, you still have a watery concoction with little taste, you can still rescue the situation.

Whatever you do, don’t throw the bone broth down the drain! There is still much benefit from consuming it. Bone broth doesn’t have to taste and gel perfectly to be hugely beneficial to your health.

But first, I must admit a little secret.

At least half the time I make bone broth, I don’t add any vegetables at all. I just throw all the bone and meat scraps into my Vita-Clay, add a bit of vinegar, fill to the top with filtered water, put on the lid and turn it on.

Since I typically make two, one-gallon batches of bone broth every single week, this isn’t too problematic in my view. My family consumes bone broth almost every day. If I don’t have time to make soup, they drink it as plain bone broth in a mug.

How do I season my broth so well that it tastes great even if no veggies were simmered with it?

The typical way to rescue bone broth with not much taste is to add sea salt and pepper. While this works well, there is a better way!

Using seasoning salt is your ace in the hole when it comes to making broth. You will never bemoan a batch that doesn’t have much flavor ever again!

There are a lot of seasoning salts out there on the market. I’ve tried a lot of them, and my first tip is to be sure you read the label before buying. There should be nothing in the ingredients list except sea salt, herbs, and spices. If anything else is listed, put it down and look elsewhere.

That said, I have two quality seasoning salts to recommend to you. The first one is Herbamare. It is fantastic and makes any bone broth taste amazing.

While Herbamare is great, I’ve actually found one that is even better in recent months. Interestingly, this seasoning salt is for red meat, poultry, and salads. It isn’t even recommended for soup or broth.

The name of this seasoning salt is Borsari and their marketing slogan is “The World’s Best Seasoned Salt”. I would agree with that assessment. The interesting thing is that there are fewer herbs and spices than Herbamare, and they aren’t listed as organic. Yet the flavor imparted to bone broth is clearly superior in my opinion. 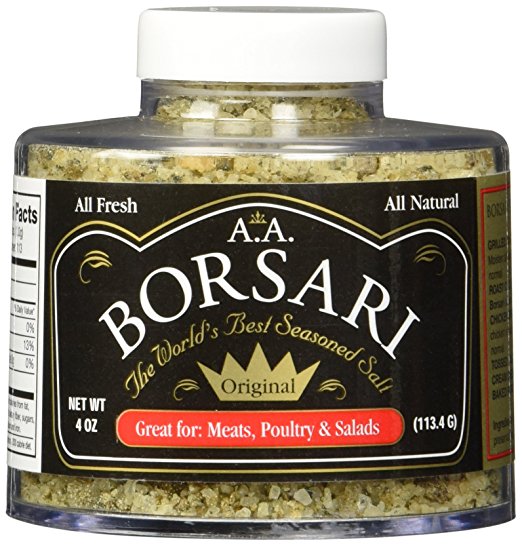 How Much Seasoned Salt to Add to Broth?

In my experience making dozens and dozens of batches of bone broth, about 1 teaspoon of Borsari per quart of bone broth seems about right.  Of course, everyone’s tastebuds are a little different, so always season to taste.

What seasoning salts have you tried for your bone broths? Have you found one that you love more than others? Please share it with all of us in the comments.