Healthy Home Economist / Archives / Gardening / Organic Hydroponics? Not for Me!

Organic Hydroponics? Not for Me! 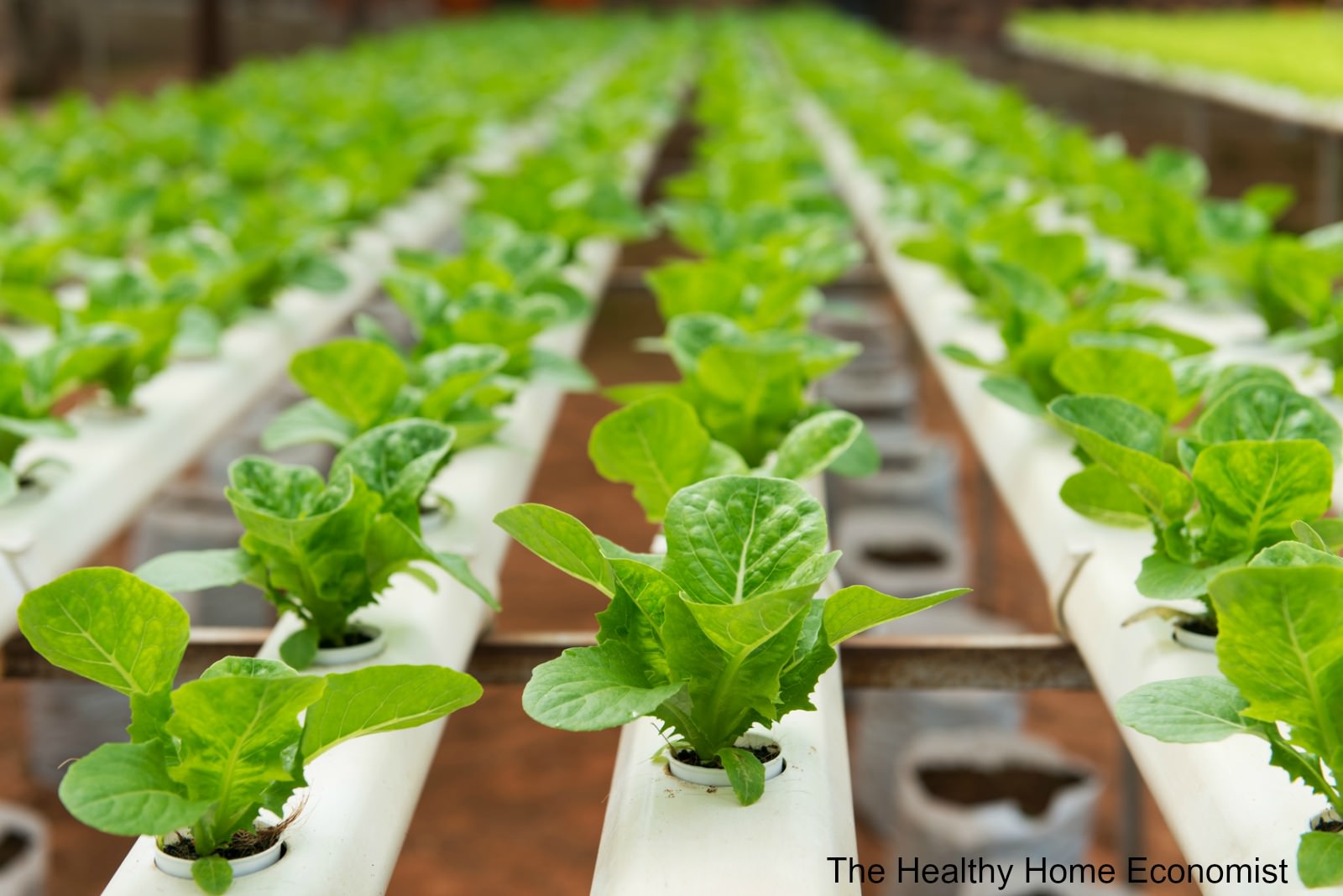 The lousy economy over the past few years boasts a silver lining in the temperate Floridian climate where I live.   Some folks who lost their jobs have started small farms or expanded existing ones, many of them growing local, organic produce.

While this is a fantastic turn of events, unfortunately, some of these farms have chosen to grow organic hydroponics instead of soil based produce.

Why do I use the word “unfortunately” and “organic” in the same sentence, you may ask?

The reason is because organic hydroponic produce produces big, watery fruit that is very low in mineral content.    In a nutshell, organic hydroponics is not nutrient dense food and is basically a waste of money!

The essential problem with hydroponic farming arises through its use of a mineral based solution to grow and nourish the plants instead of soil.   Some hydroponic operations even rely on artificial lighting.    Proponents of organic hydroponics claim that their produce is just as good as organic produce grown in soil.     Such claims are extremely short sighted.   To actually assume that an artificial growing environment could ever come close to the perfection of nature is just plain silly!

No mineral solution can ever take the place of black, worm filled, organic soil that is carefully tended and worked by the farmer season after season.

The proof that organic hydroponic produce is relatively nutritionless can be easily and quickly measured with an instrument called a refractometer. Nutritional measurement is performed by squeezing a couple of drops of liquid from the produce to be tested onto the prism of the refractometer and reading the results.   The juice should be from the part of the plant that you would actually eat, not the stem or the roots, for example.

The refractometer (click here for a picture of one) measures the amount of carbohydrate and dissolved minerals in the juice. Sweeter, riper produce will therefore test higher brix than unripe produce. Calcium is one of the minerals that increases substantially in high brix produce. The minerals in high brix produce are readily and easily assimilated when eaten because they are in naturally chelated form. This means they are attached to amino acids and are biologically active unlike the same minerals found in a rock, for example.

Animals instinctively prefer high brix plants.   Cows given a choice of hay will choose the one with higher brix.    Cows which graze on high brix grass will produce more nutrient dense milk, butter, and cream too!

Given a choice, humans will choose high brix produce as well because the taste is so much better!   Taste will always tell you if the produce is high brix or not.  Ever had tomato sauce made from 15 brix tomatoes?  It is an experience you will never forget!  Organic hydroponic tomatoes generally test at a measly 2 or 3.

Pathetic indeed for the organic price premium you pay per pound!

High brix produce is resistant to insects, disease and rot. Have you ever noticed how that box of organic hydroponic strawberries from the store looked so beautiful on the shelf but a mere 2 days later, the berries have developed large spots of rot that have to be cut away?

Produce that rots quickly is indicative of low nutrition, poor quality fruit – organic or not!

What to Choose? (Hint: NOT Organic Hydroponics)

Even local produce grown in soil using conventional means will generally beat out organic hydroponics when measured for mineral content.  This is why I tell folks to seek out local produce at farmer’s markets that is grown in dirt, not hydroponically. Buying at farmers’ markets is a great way to seek out quality produce as you can ask the farmer directly how the produce was grown.

Ultimately, the highest brix produce I’ve ever come across is from people’s personal gardens. Working the soil on a small, personal patch of ground yourself is an activity that consistently produces spectacular results.  My Mother-in-Law in Australia has a small garden that has the thickest layer of worm filled, black dirt I’ve ever seen. She has been working this soil with compost and other natural fertilizers for over 10 years. There is no doubt that the produce she grows in this dirt is more nutritious and higher brix than any organic produce to be found at the store!

So, actively seek out high brix produce, not just organic and especially not organic hydroponics. Your taste buds and your wallet will thank you.

Weston A. Price Foundation
4 Steps to Keep Monsanto OUT of Your Garden!
Heirloom vs Hybrid Produce
Hydroponic Invasion of USDA Organic

Seeds of Change Garden is Underway!