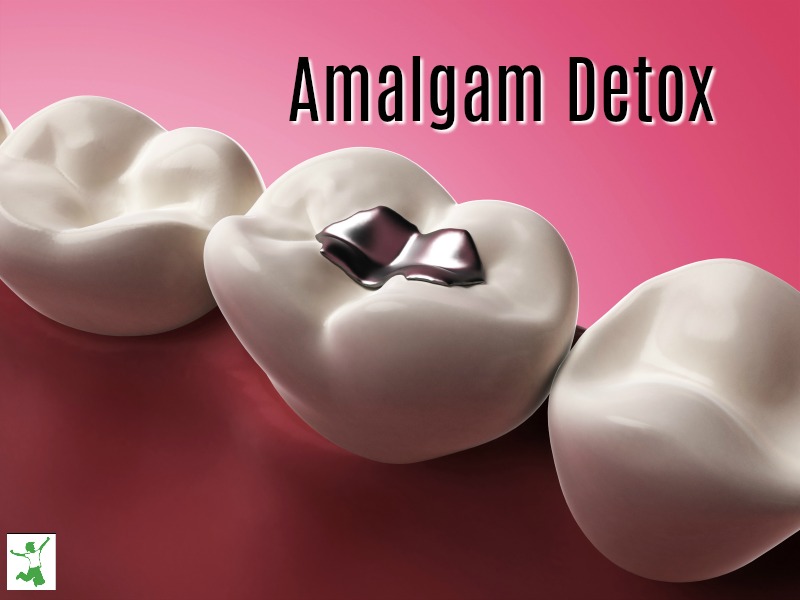 Silver fillings, also called amalgams, are one of the most toxic and health-damaging dental materials ever developed. Made up of approximately 50% liquid mercury with the remainder a powdered combination of silver, tin, copper, zinc and other metals, amalgams lodged in a person’s mouth over time have the very real potential to slowly but surely cause heavy metal poisoning, which results in very serious and life-altering nervous system toxicity. It can also affect numerous other body systems. When this occurs, a thorough mercury detox is required to eliminate it.

Why? Because mercury is lipophilic. This means that it is stored and concentrated in the fatty tissues. The brain, the master controller of the nervous system, is the fattiest tissue and organ in the entire human body and is comprised of at least 60% fat. It is no exaggeration to say that the brain is nothing short of a mercury magnet.

I remember many years ago when I tried to discuss the health dangers of amalgams with my dentist as my husband needed to have 6 of them removed at the recommendation of our holistic physician. He scoffed at my concerns. Realizing that I needed to find a more like-minded dental professional, I changed dentists, which turned out to be fortuitous as it is dangerous for just any dentist to remove silver fillings! A few years later, I ran into this dentist who had once rolled his eyes at my concerns.

He was only in his early 40’s but had been forced to shut down his dental practice and go on permanent disability because he was stricken with Parkinson’s disease. In addition, his wife who worked every day in his dental office where mercury vapors likely abounded from the lack of safety precautions taken when amalgams were installed, removed or replaced suffered from unexplained infertility, another symptom of mercury toxicity. Such an incredibly tragic story and very likely completely preventable!

While the American Dental Association (ADA) shockingly continues to keep its head in the sand and insist on the safety and “enviable 150-year track record” of amalgams, those who take the initiative, refuse to drink the Kool-Aid, and do their own research on the subject in depth know otherwise. For starters, Scottish undertakers are required by law to either pull amalgam teeth from corpses prior to cremation or install expensive air filtration equipment due to concerns about the amalgams contaminating the environment. In addition, the Environmental Protection Agency (EPA) considers mercury fillings that have been removed to be toxic waste that requires special handling for disposal.

Amalgams are toxic when outside the body, but perfectly “safe” according to the ADA when inside your mouth?

According to the World Health Organization, people with silver fillings are at risk for mercury exposure estimated to be between 3 to 17 micrograms per day with an average of 10 mcg/day and extreme levels of 100 mcg/day. This is up to 20 times greater (at the extreme level) and double the exposure on average of all other environmental sources of mercury combined including eating fish species that are known to be high in mercury every single day!

The exposure to toxic mercury from silver fillings occurs from the mercury vapor that is released from such basic and necessary activities as chewing and brushing. In particular, drinking hot soup or beverages has been shown to cause even more rapid leaching of mercury vapors into the oral mucosa, 80% of which are absorbed into the bloodstream! The video in the linked article shows the mercury vapor coming off amalgams when exposed to hot liquid.

Summary of the Scientific Research on Mercury Exposure from Amalgams

Mark Hyman MD has thoroughly examined the research on amalgam dangers and is convinced they are a health hazard to the millions of people exposed to their effects. The scientific research to date has this to say about silver fillings and their impact on human health:

One study on children with amalgam fillings produced mixed results, however. The study published in the Journal of the American Medical Association found no significant health differences in children with silver fillings compared with children who had composites. However, as pointed out by Dr. Hyman, the study duration was short and did not emphasize that the children with amalgams had much higher levels of mercury in their urine than the kids with white fillings. This is a critical point because it shows that the mercury vapors coming off amalgams 24/7 in a person’s mouth are indeed absorbed into the bloodstream where it will be deposited and stored in the fatty tissues, most particularly the brain over time.

If you suspect you may be suffering from mercury toxicity from amalgams, below is the complete list of symptoms according to the Weston A. Price Foundation’s article on the health hazards of mercury.

Getting the Mercury Out Safely

Once people realize that their dental amalgams are very likely contributing to their health woes, a typical reaction is to want to get them out and replaced with composite fillings – fast!

The problem with this is that regular conventional dentists are totally unqualified to remove amalgams and have inadequate equipment to protect you (and themselves) from the mercury vapors and considerable toxic heavy metal exposure that occurs during the removal process.

What’s worse, conventional dentists think they are qualified and will tell you as such. It’s buyer beware and very much up to you to make sure your dentist knows what he/she is doing and is using the correct equipment and safety protocols before you submit to care at that office.

This story of a botched amalgam removal as described by a friend of mine is a sobering case in point. She was horribly poisoned and suffered autoimmune thyroid disease from an (at the time) apparently successful and noneventful amalgam filling removal. It shows what can happen if this process isn’t approached with caution. She has fortunately completely recovered under the expert care of her holistic practitioner who helped her do a safe mercury detox.

Amalgams Should ONLY be Removed by a Biological Dentist

The truth is that if you don’t have a qualified holistic or biological dentist to remove your amalgams, then it is actually safer to leave them in for the time being.

The good news is that there are more and more dentists that are qualified to help you get your amalgams safely out of your life for good. My husband went through this process about 15 years ago. He had all 6 of his amalgams removed, one every six months (the dentist tested each one and removed them based on how much they were leaking mercury vapor).

The reason we did it so slowly is because it was so expensive and wasn’t covered by insurance. It was so incredibly worth it even though it was a multi-year process. His autoimmune symptoms totally resolved over a period of months following the removal of the last amalgam. He also improved incrementally as each amalgam was replaced.

Now, many years later, the price for removal is (thankfully) much more reasonable, but you still need to take care to properly detox the mercury from your tissues after the process is complete.

Remember … even if you remove your amalgams safely with a properly trained dentist, you still have all that mercury that has been stored in your fatty tissues over the years and possibly decades that needs to come out.

Dr. Hyman says that it takes up to 18 years for the body to clear only half of that mercury naturally from the body once amalgams are gone! Do people need to do a mercury detox once they have silver fillings removed?

Doing a mercury detox starting the day you have your first amalgam removed until 6 months after your last one is taken out is very important. This protocol will work for detoxing other heavy metals as well.

It is the approach recommended by Biodynamic Wellness whose trained and caring staff brought my friend described above back to health after a botched amalgam removal which poisoned her. The dosages below are for adults. The dosage is cut in half for children.

Another recommended part of the mercury detox protocol is to do traditional oil pulling also called Karack’s Oil Treatment. Here is how to proceed every day for 6 months following your amalgam removal as described by Biodynamic Wellness.

Hold a mouthful of unrefined sesame oil (dark bottle) in your mouth for 3-10 minutes intermittently swishing it around, “chewing it,” and gargling. When you can’t hold it any longer (without serious drooling!), spit it out. Then gargle and rinse with salt and baking soda, and brush your teeth. Do this treatment daily for 3-6 months.

The change of color from golden to white as well as the change of texture from thick to thin upon spitting out this oil indicated the degree of lipophilic (fat-loving) toxic chemicals, metals, and microbes that have been absorbed into the oil from the oral mucosa, as well as throughout the entire bodyas the blood circulates through the oral mucosa. Environmentally sensitive individuals particularly like the chemical-clearing effects of Dr. Karack’s Ayurvedic sesame oil treatment.

Recognizing that amalgams are dangerous to health, getting them properly removed by a trained dentist and replaced with biologically compatible composites, and following the proper protocol for a mercury detox described above during and after the removal process are the three things necessary to reclaim the health that slow and insidious mercury poisoning has taken from you or someone you love.

You’ve probably noticed that truly biological dentists who are holistically minded in all areas are few and far between!

If you have a dental diagnosis that you aren’t sure is of benefit to your health or just need some advice, I recommend contacting Dr. Carlo Litano’s biological dental office in Tampa, Florida. If you can’t visit his office in person, he is available for a phone consultation to help you assess the situation remotely. Dr. Litano can also help coach you through dealing with your conventional dentist if that is your only option.

You can either set-up an appointment on his website or contact the office at 727-300-0044 to schedule a phone consult with the receptionist.

7 Ways to Avoid Detox Symptoms on a Cleanse
Detox Baths: Which are Best and for What Ailments
Coffee Enema: Unmatched Detoxification for Health and Recovery
Natural Deworming Methods that are Safe and Effective
How to Gently Detox in Preparation for Pregnancy
Rebounding: A Great Way to Gently Detox
How to Do a Hair Detox and Enjoy Beautiful Locks Naturally

Is Your Dentist a Bricklayer or an Architect?

Which Type of Vinegar Bath is Best for Detoxification?