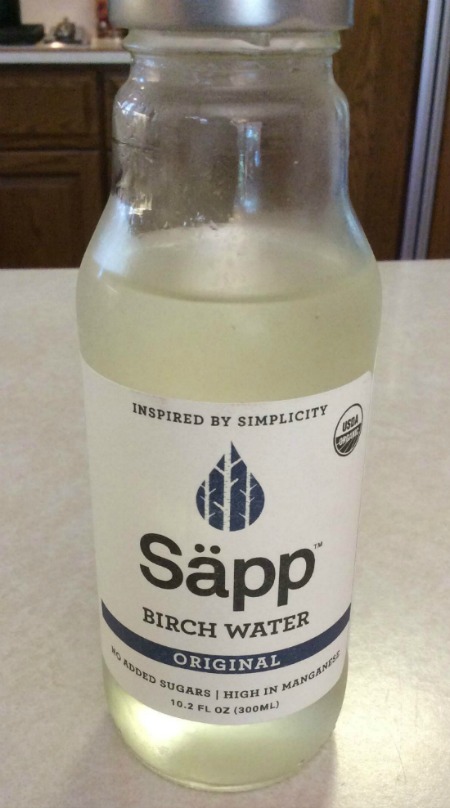 Jacqueline, a reader friend living in Wisconson, emailed me recently asking about birch water. This low carb super-drink is derived from the same type of birch tree that contains naturally occurring xylitol.

The bottles were on display at her local health food store. They were placed right next to the coconut water leading her to believe that it must be a healthy beverage.

Reading the label it sounded pretty clean and I was curious so I bought a bottle. When I came home I googled it and could find very little from my trusted bloggers. I would love to read your thoughts on this product!

Like Jacqueline, when I started researching birch water, I could not find much information either. The online marketing spin from the companies that make it sure sounds tempting!

Natural but is it Healthy?

Don’t you just love the “Inspired by Simplicity” and “Made by Forests, not Formulas” marketing slogans? The logo is excellent too – tree trunks in a drop of water. Very very effective, well thought out marketing strategy. A lot of money went into bringing this product to market. I couldn’t find a lot of information about the company that makes the birch water in the picture above, but it is probably no mom and pop operation trying to better the world by bringing a truly traditional beverage to market. It is most likely a multi-national company trying to make big bucks off something trendy and new. These are the magic words for the American consumer!

After trying a bottle, Jacqueline had this to say:

Organic birch sap and citric acid are the only ingredients in the original flavor I purchased.

It’s not bad tasting. Not a lot of flavor but something I would def buy again if it were good for me. It says it’s high in Manganese which I’ve read could be bad in high quantities? IDK [I don’t know] but would love to find out more info.

Intrigued, I started to dig a bit deeper.  I haven’t seen birch water sold in the health food stores in my area yet, so it was a new one to me.

What is “Birch Water”?

Birch water, also called birch tree water, is a beverage traditional to peoples living in the Baltic nations of Estonia, Latvia, and Lithuania.

Collecting birch sap to make Byarozavik, which means “birch tree water” in Slavic, is similar to making maple syrup. The trees are tapped to extract the tree’s liquid. The process is performed in the Spring after all the frost is gone.

Not surprisingly, birch water is rich in minerals such as potassium, zinc, and manganese. As such, the mildly sweet beverage can be considered an electrolyte-replacing beverage similar to coconut and maple water.

Athletes in Russia and Ukraine supposedly drink it for hydration and to improve overall endurance and performance.

Birch Trees are a Source of Xylitol

Those of you who are food research junkies like me might already know that birch trees are a source of the sugar alcohol known as xylitol. This is the source of the non-GMO xylitol that is for sale at retail. GMO sources of xylitol come from corn in case you are interested.

Although I don’t consume processed xylitol myself and don’t recommend it as part of a healthy diet, the small amounts of naturally occurring xylitol present in birch water are not necessarily a problem unless you are sensitive. Xylitol can cause digestive distress for some and can trigger an unbalanced gut environment in others if too much is consumed.

In its natural state, which is how ancestral cultures consumed it (aka, raw and unpasteurized), birch tree water only lasts about two days before starting to spoil.

A product that only lasts two days is obviously not going to be viable for commercial distribution. As a result, commercial birch water is pasteurized via proprietary processes before bottling to extend the shelf life up to a year according to organic birch tree water manufacturers Sealand and Byarozavik.

This processing destroys any probiotics and enzymes unique to the birch tree and its environment that are naturally occurring.

What’s left is mineral-rich water with some naturally occurring xylitol in it.

Is this worth it at around $3 per bottle?

Maybe one to grab and go is fine occasionally, but probably not worth the price on a regular basis. A glass of filtered water with a squeeze of half an orange or lemon, a tablespoon of liquid whey and a pinch of sea salt would give you a lot more benefit for a lot less!

Other Concerns about Birch Tree Water

An investigation into the birch water trend unearthed a few other concerns. First of all, the flavor varieties I looked at online seem to be either loaded with sugar, caffeine or both.

Watch out for that! The same thing happened to kombucha, the Russian (and Chinese) traditional beverage. A perfectly healthy ancestral drink is quickly derailed when it becomes commercialized!

Even if you wisely choose the original flavor as Jacqueline did, be aware that citric acid is added. This additive could still be GMO despite a USDA Organic label, believe it or not.

According to GMO Awareness, the USDA Organic certification only requires that 95% of a product’s ingredients be certified organic. The remaining 5% does not have to be organic. In fact, they might even be GMO.

Usually, USDA Organic means that everything is organic, but not always. In the case of birch water, notice the label below states that 99.9% of the product is organic birch sap. The remaining .5% is citric acid which could be GMO even though the product is USDA certified organic. 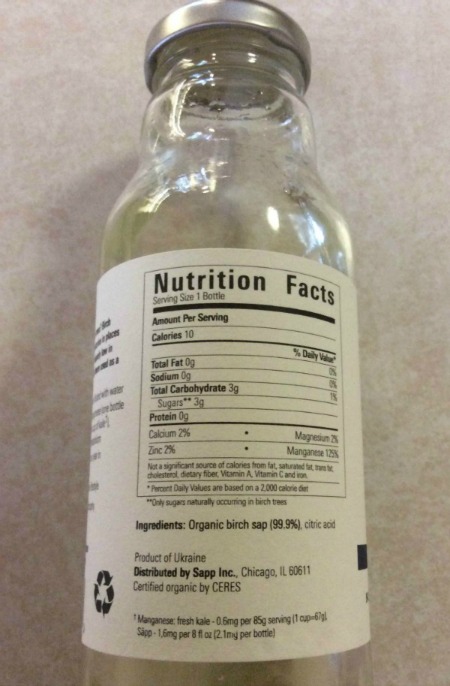 Jacqueline emailed me to say that it stated on the label that the product was GMO-Free. So, it looks like this company has done the right thing and informed consumers that even the citric acid in its products is non-GMO. That is good news.

The bad news is that even if citric acid is non-GMO, it can cause reactions in individuals sensitive to monosodium glutamate, more popularly known as MSG.  According to the Weston A. Price Foundation,

Citric acid” is produced by fermentation of crude sugars. During processing, the remaining protein is hydrolyzed, resulting in some processed free glutamic acid (MSG) (1).

The Truth about Birch Water

In sum, birch water doesn’t appear to be a problematic beverage to drink once in a while if you choose plain versions and aren’t overly sensitive to small amounts of MSG. It’s also best to sip the birch water with a meal containing some healthy fat too.  The fat will slow the absorption of the MSG and reduce the possibility of negative symptoms.

Avoidance of the sugared or caffeinated birch sap flavors is important in order to avoid issues with addiction. Getting addicted to commercially bottled kombucha is very easy for that reason. Birch water would present the same challenge, so watch out!

Just know that even if you sip the plain birch water from time to time, it is a far cry from the actual fresh, unprocessed birch water that ancestral cultures consumed for centuries! If you want that type of truly healthful birch water, you will need to tap a birch tree yourself in the springtime.

Overwhelmed by the GAPS Diet? Help Has Arrived!

How to Resolve Tooth Decay in Toddlers