Best Herbs for Allergies (+ how to use them) 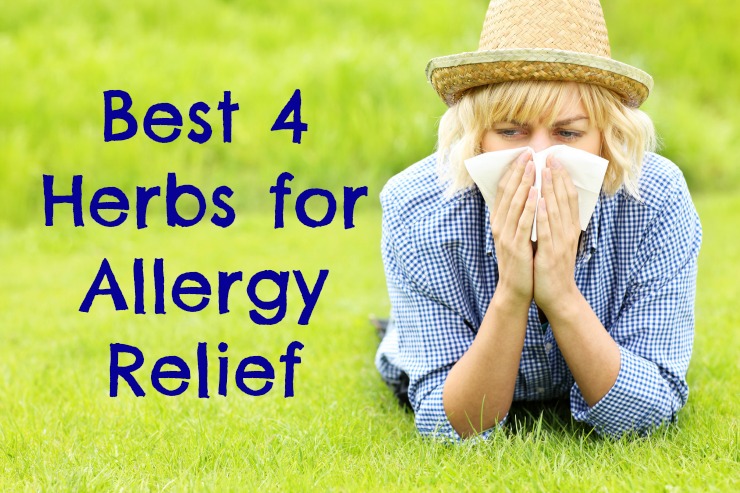 When the pollen gets thick during springtime, more people than ever are reaching for the over the counter eye drops, pills, or nose sprays for allergy relief. Some even need prescription strength meds.

The number of sufferers of seasonal allergic rhinitis or hay fever is increasing rapidly. The current rate of one in four is nearly double what it was in the 1980s.

The interesting thing is, as little as 200 years ago, hay fever was virtually nonexistent! No one knows exactly what combination of factors is causing this steady increase over the years. Some pets are having hay fever symptoms now too!

Most experts do seem to agree that it probably has a lot to do with the modern obsession with cleanliness. An overly sterilized home environment combined with playgrounds sprayed with pesticides and little exposure to healthy soil/farm animals hampers the development of a normal immune system due to a lack of frequent exposure to diverse and beneficial microbes (1).

With seasonal allergies as predictable as they are annoying, it is surprising that more people don’t know how to harness the power of herbs for fast allergy relief with no drugs needed. Here’s a primer for those who wish to give it a go this coming season.

Seasonal allergies are ultimately the uncomfortable result of a very confused immune system.

Each spring and summer, flowering plants release tiny grains known as pollen. These tiny particles, which are only about one-millionth of an inch across, are released into the air by trees, grasses, and weeds for the purpose of fertilization and propagation of their species.

As few as 50 pollen grains per cubic yard is considered a high pollen count. When these grains are inhaled into the nose of someone with hay fever, the immune systems are thrown into hyperdrive.

The protein coat on each grain of pollen is what causes the allergic reaction. In some people, it can be extremely violent with the body mounting the same type of response as if it were being invaded by pathogenic bacteria or a deadly virus.

Natural substances known as histamines are released into the bloodstream as the immune system mounts a response. This is what causes the inflammation of the sinuses, eyes and respiratory system.

Histamines work to stimulate the immune system by increasing the permeability of tiny blood vessels called capillaries to white blood cells and some proteins. This provides access to the tissues where they are needed.

People who suffer from full-blown seasonal allergies or just tend to sneeze a lot on heavy pollen days typically complain year after year that “the pollen is really heavy this year, isn’t it?”. I’ve been known to whine about it too!

In reality, pollen levels were in decline until 1999 with a reduction in the number of grasslands in recent decades. Since then, pollen levels have been rising again possibly due to strange weather patterns combined with milder springtime temperatures.

Even with increases in recent years, pollen levels are still not where they were in the 1970s, so pollen is not completely to blame for the doubling of hay fever levels since the 1980s with levels predicted to double again by 2030. The hygiene hypothesis, poorer gut health in general, and increasing pollution seem the most likely culprits. Pollen is actually not the true problem.

According to WebMD, the trees and grasses that cause people the most misery include:

Breezy days can cause symptoms to worsen because the wind blows the pollen off the ground and swirls it though the air increasing the odds that each breath will contain a noseful of grains. Rainy days temporarily improve the situation as the rain washes the pollen out of the air onto the ground.

Most people automatically reach for over the counter or prescription meds for seasonal sniffles. However, herbs can provide allergy relief that is just as effective without any nasty or dangerous side effects and toxicity.

It amazes me that more people don’t try them!

The only drawback with using herbs for allergy relief is that you need to keep using them faithfully throughout the entire pollen season. Ideally, start using them a week or so before the pollen gets bad.

Can you start using herbs once symptoms have already started?  Yes, you can, but you will need to be patient until the full power of the herbs kicks in. The reason is that it takes a few days to build up levels of the herb’s anti-inflammatory properties in your blood and tissues.

So, immediate relief like what would happen from taking a drug is usually not experienced although you may see a slight improvement in symptoms right away.

If you would like to try herbs for allergy relief this year instead of meds, here are the top four to try alone or in combination as identified in the scientific literature.

Note that using these herbs for allergies is even more effective when combined with a daily teaspoon or two of homemade elderberry syrup due to its powerful anti-inflammatory properties. Store-bought syrups are watered down and not as helpful.

Cinnamon extract and Spanish Needles (Bidens pilosa) work very well as a combination botanical product (CBP) and the benefits are scientifically proven.  Note, however, that while the type of cinnamon is more of a personal preference for cooking, baking, or insulin control, cassia cinnamon is better than Ceylon for allergy relief according to the scientific literature.

In 2008, Nutrition Journal published the results of a  randomized, double-blind, placebo-controlled clinical study involving 20 subjects. The subjects were given a combination extract containing cassia cinnamon and Spanish Needles. This was compared with the effects of a placebo or the pharmaceutical anti-histamine loratadine, which is sold under the brand names Claritin, Alavert, Select, and Fad (2).

The scientists concluded that the combined extract of cassia cinnamon and Spanish Needles significantly reduced the symptoms and inflammation associated with allergic rhinitis in a manner comparable with the loratadine.

If your allergy symptoms are not too severe, I have personally found that cassia cinnamon works great all by itself.

I mix 1 teaspoon of cassia cinnamon (freshly grated cinnamon is by far the most potent!) in a small cup and mix with 1 teaspoon of raw, local honey. Select honey that is preferably from the same season as your allergies.

The honey mixed with the cinnamon is delicious to eat! It will temporarily provide relief from watery, itchy eyes, sneezing and nasal congestion.

Stinging nettle, Urtica dioica, is one of the very best herbs for allergy relief as it is a potent anti-histamine. Hence, nettle is able to effectively counteract the release of inflammation-inducing histamines that a sufferer of hay fever experiences in response to pollen exposure.

According to the international journal Phytotherapy Research, nettle extract inhibits pro-inflammatory pathways related to allergic rhinitis. It does this by antagonizing histamine 1 receptors and impeding prostaglandin formation. This reduces hay fever symptoms and overall severity (3).

How to Take Nettle

The best way to use nettle for relief of allergy symptoms is via a concentrated nettle supplement or preparing a herbal infusion. Obviously, the supplement approach is faster and easier for most people.

If you wish to prepare a nettle infusion instead of supplements, source one ounce of dried nettle leaves (preferably organic) per quart of filtered water. You can also use three ounces of green nettles leaves instead if you have a place to buy them fresh.

Place the dried or fresh nettle in a quart mason jar and fill to the top with boiling water. Screw the lid on tightly and leave at room temperature for 4 hours.

Once the nettle leaves have steeped for the proper amount of time, strain out the plant matter. The dosage is 2 cups per day if you weigh between 125 – 150 pounds (57 – 68 kilograms).

Please note that herbal infusions spoil rapidly. Use them up as soon as possible and store unused portions in the refrigerator for no more than a day. Discard any portions stored for longer than a day and prepare a fresh batch.

If you cannot find stinging nettle where you live, you may substitute alfalfa instead.

Turmeric is a product of Curcuma longa, a perennial plant belonging to the ginger family. Native to tropical South Asia, as many as 133 species of Curcuma have been identified worldwide!

Turmeric is known as the golden spice because of its brilliant yellow color and seemingly endless applications as safe, nontoxic herbal medicine including use as a natural antibiotic. Modern medicine has begun to recognize its importance. This is indicated by the over 3000 publications dealing with turmeric that have come out within the last 25 years!

This wonder-spice is a mainstay of my anti-inflammatory work with patients in my practice where I use liposomal preparations of curcumin, the natural phenols responsible for turmeric’s yellow color, when I suspect their symptoms stem from a challenged immune system.

How to Take Turmeric

To defend against the symptoms of seasonal allergies, look for pure, organic turmeric either off the spoon chased with water, mixed into a beverage or food (like raw, local honey), or in capsule form. Dosages of 400 to 600 mg taken three times daily or as directed by your holistic physician should do the trick. 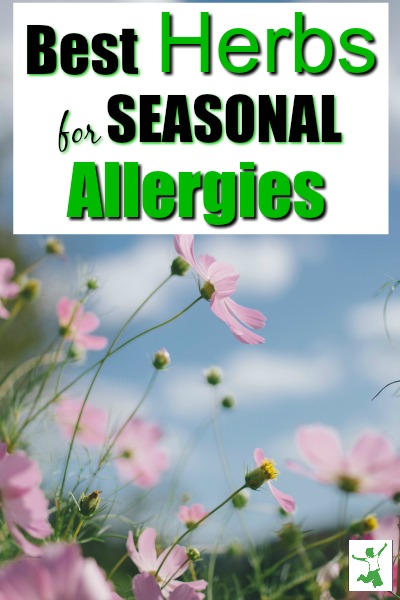 Herbs for relief of seasonal allergies work best when combined with a low sugar diet and oral probiotic therapy.

The way to do this is to clean your teeth as normal before bedtime. Then, empty a probiotic capsule (I use this one) that contains the strains Streptococcus salivarius and/or Lactobacillus salivarius into the mouth. Slowly swish it around for a minute or two before swallowing. Do not drink any water before going to sleep.

Be sure to read the label of your probiotic to make sure it has at least one of these oral strains.

Alternatively, suck on an oral probiotic lozenge before nodding off.

While you slumber, the orally-based flora works to rebalance microbial populations in the mouth, ears, nose, sinuses, and throat.

Do this every night for a week or two and watch morning allergy symptoms slowly disappear!

As a personal testimonial to the information described in this post, I developed a severe tree pollen allergy in 2010 after a traumatic knee injury which required a highly disruptive round of very strong antibiotics. I never had seasonal allergies before this in my life!

Bottom line … antibiotics not only mess up your gut. They also mess up the oral probiotic balance in your ears, nose, and throat!

This adult-onset seasonal allergy problem has been completely resolved simply by using the herbally based methods combined with oral probiotic therapy described above with zero need for medication.

Deworming the Gut Safely and Effectively

Herbal Infusion: How to Prepare and Use Therapeutically