Healthy Home Economist / Archives / Healthy Pregnancy, Baby & Child / Move Over Prozac – There’s a New Game in Town (and It Won’t Kill Your Sex Life or Keep You Awake At Night) 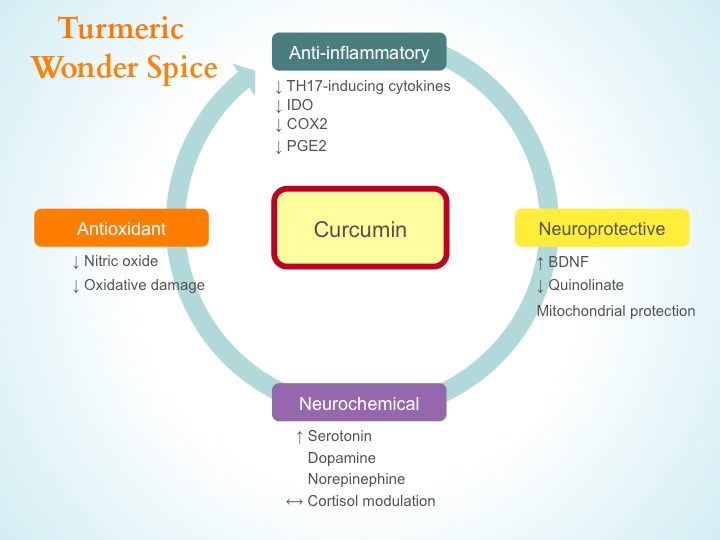 Every Monday, I make a Bolognese. I learned the recipe-less technique from my Tuscan mom whose simple dishes have consistently outdone some of the 5 star chef creations I’ve had at Manhattan restaurants.

With two kids at home, this traditional Italian sauce becomes a stealth transport vehicle for kale, beets, cilantro, and all manner of otherwise snubbed delicacies. For the past two years, I have given the dish a twist that my Nonna wouldn’t recognize — 2 tablespoons of organic turmeric.

This wonder-spice is also a mainstay of my anti-inflammatory work with patients in my practice where I use liposomal preparations of curcumin, the natural phenols responsible for turmeric’s yellow color, when I suspect their symptoms stem from a challenged immune system.

Mild in taste and a major feature of curried traditional foods from around the world, turmeric is a member of the ginger family. As it turns out, it has been consumed for thousands of years — ever since people used their relationship to food and their environments to enhance their health and wellness.

One of the many shortcomings of pharmaceuticals is that the intensity of their primary effect so far outpaces what would be achieved naturally that it’s the difference between a skilled driver sensing the nuances of the road and putting a heavy rock on the gas pedal. The collateral damage exacted by medications represents the fact that they have “unintended” effects that may not be desirable. This is how we develop the “whack-a-mole” phenomenon of suppressing symptoms only to cause others. Homeopathy, herbalism, and the strategic use of nutriceuticals afford practitioners and patients a gentler, but effective means of navigating the road to health.

A recent study entitled Efficacy and Safety of Curcumin in Major Depressive Disorder: A Randomized Controlled Trial sought to substantiate this claim. In this study, 3 groups of 20 participants with Major Depression according to a commonly used scale, were randomized to Prozac, Prozac + 1g of oil-based curcumin (of decent but not optimal potency), and curcumin alone for 6 weeks. The proportion of responders was highest in the combination group (77.8%) than in the Prozac (64.7%) or curcumin (62.5%) groups, but these differences were not statistically significant. The authors emphasized curcumin’s high degree of safety up to dosages of 12g daily.

In conclusion, the researchers noted:

“This study provides first clinical evidence that curcumin may be used as an effective and safe modality for treatment in patients with MDD [major depressive disorder] without concurrent suicidal ideation or other psychotic disorders.”

Important considerations for the interpretation of this data:

The raters but not participants were blinded, so there is a significant risk of bringing the “active placebo” effect of antidepressant that Irving Kirsch PhD has documented where patients treated with antidepressants respond to their expectations around treatment and to perceived side-effects (“it’s starting to work!”) rather than to the medication itself.

Patients were also allowed to take benzodiazepines, an important uncontrolled variable and a more likely confounder in the medication groups as antidepressants disrupt sleep.

Pepper is known to enhance absorption and was not used in this formulation (who knows what was — GMO soy oil?).

There is unlikely to be a one-pill cure. The effect of curcumin in this study should be viewed as a launching pad for myriad other wellness changes that can support mood including stabilization of blood sugar, elimination of inflammatory foods, chemicals, and pesticides.

How Turmeric Helps with Depression

How could a spice actually help depressive symptoms? There is mounting evidence from animal models, in vitro, and human studies that elucidate mechanisms of curcumin’s sophisticated effects which include anti-inflammatory, anti-oxidant, immuno-modulatory, anti-cancer, and neuroprotective. Turmeric is a reactive oxygen scavenger, meaning that it turns on antioxidant producing genes (NRF2) and supports synthesis of glutathione, inhibits inflammatory enzymes, and supports liver detox. Inflammation leads to changes in the brain’s ability to properly regulate hormones (adrenal, thyroid, sex), and to changes in the production of neurotransmitters such as serotonin, as well as to changes in plasticity or the ability to regenerate brain cells. Curcumin, via the culinary spice turmeric as delivery vehicle, hits a lot of these problem areas all at once.

As a type A “doer” who multi-tasks by necessity, the idea of a food that goes to town on the bad and supports the good is wonderful, and to be able to use this agent therapeutically is an essential consideration for every provider.

Somehow, I don’t expect to see this paper sandwiched between glossy Pharma ads in this month’s American Journal of Psychiatry, but now, at least, you know it exists!