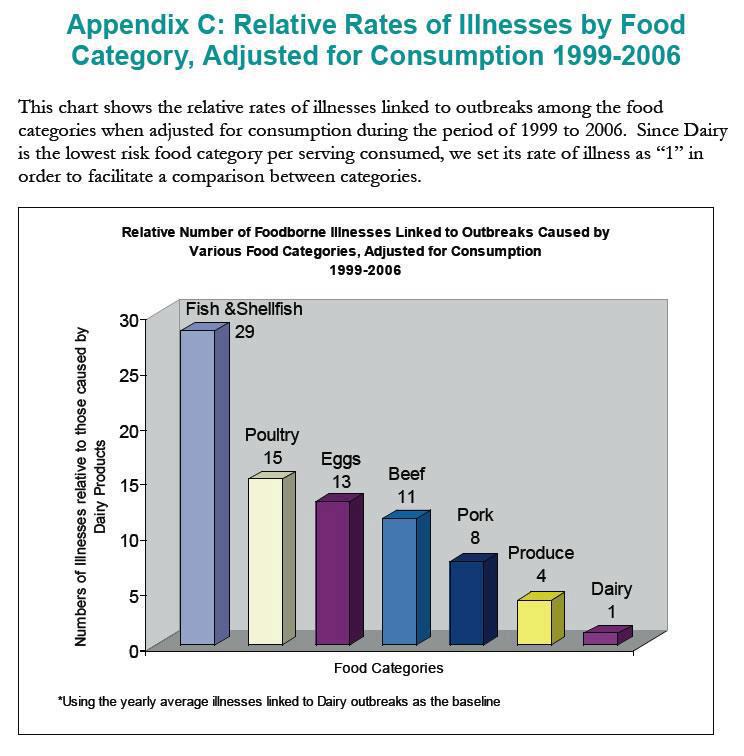 Amid the worrisome and growing problem of bacterial contamination of food, there is some good news.

Dairy products are some of the safest foods for consumers to eat.

The chart to the right from a report by the Center for Science in the Public Interest shows just how low the risk of foodborne illness in milk products is compared with other foods such as seafood and poultry.

Even produce carries a significantly higher risk for foodborne illness than dairy and this includes dairy that is completely unprocessed and consumed fresh from the farm.

According to published reports from the Centers for Disease Control between 1999 to 2010, foodborne illness from raw milk averaged about 42 per year.

This means that a person is about 35,000 times more likely to get sick from other foods than from raw milk, according to Sally Fallon Morell, President of the Weston A. Price Foundation.

Mrs. Fallon Morell goes on to add that ” … with good management practices in small grass-based dairies offering fresh unprocessed whole milk for direct human consumption, we may be able to reduce the risk even further.”

While cleanliness and good farm management practices have traditionally been the best ways to minimize the already low risk for raw milk contamination, technology is now offering another tool in the arsenal.

A recently developed technology now offers grass-based dairies the ability to test the safety of every batch of raw milk within hours in a cost-effective and efficient manner.

Developed by Mocon Inc. of Minneapolis, Minnesota in partnership with Luxel Biosciences of Cork, Ireland, the small, compact GreenLightâ„¢ Model 910 is a breakthrough system which offers rapid, same day, preventative screening technology for aerobic bacteria right on the farm by measuring respiration to determine the total live bacteria colony count.

Traditional screening technology for pathogenic bacteria that respirate aerobically such as E. Coli, Listeria, Salmonella, and Campylobacter use agar or film plate methods which are tedious and time-consuming with specialized labs required for the testing and results taking up to a week to produce.

Homogenizing the samples, creating dilutions, preparing the agar plates, replicating the samples up to 4-5 times each and then incubating for 48-72 hours to let bacteria grow is time and labor-intensive not to mention cost-prohibitive for frequent sampling.

Unlike these traditional testing methods, the GreenLightâ„¢ Model 910 reduces sample preparation time, the overall cost of testing and provides same-day results in 1-12 hours depending on bacterial load.

As bacteria in the test sample multiply and respire, they consume oxygen and this change in oxygen is used to calculate the original sample’s colony forming units per gram (CFU/g) for solids or per milliliter for liquids.

The small unit includes an easy-to-use PC software interface with multiple measurement modes.  In addition, it provides the ability to generate a unique ID for each test so that it is simple to track specific batches.

This means that every single tank of milk could conceivably be tested before it is even bottled and purchased by the consumer!

While the type of bacteria detected in a given sample cannot yet be identified using the Greenlight 900 Series, this capability is expected to be available by the end of the year according to Mocon.

The unit costs about $9,000 and demos are available for farms that wish to try before they buy.

Raw Milk is Inherently Safe and Now Farmers Can Prove It – No Labs Required!

According to Dr. Ted Beals MD who compiled the CDC data that proves raw milk is safe:

It is irresponsible for senior national government officials to oppose raw milk, claiming that it is inherently hazardous. There is no justification for opposing the sale of raw milk or warning against its inclusion in the diets of children and adults.

While Dr. Beals’ analysis no doubt proves the case to those open-minded consumers willing to spend the time in research, old habits die hard and the government stance that “raw milk is dangerous” still needlessly scares away far too many consumers who could truly benefit from this nutrient-dense food.

Perhaps the advent of cost-effective, on-the-farm technology such as the Greenlight 900 Series will help pave the way for raw milk becoming the in vogue, popular health food it truly should be.

Mocon’s New Greenlight 910 Unit
Those Pathogens, What You Should Know

Tricks and Tips for Traveling With Homemade Formula