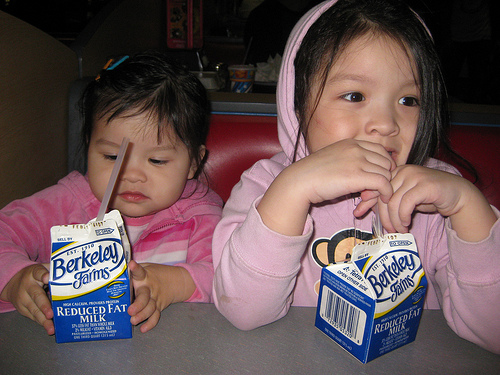 A new study published in the Archives of Disease in Childhood, a sister publication of the British Medical Journal, reports that low-fat milk is associated with higher weight in preschoolers. Kids drinking low-fat milk tend to be heavier than those drinking whole milk. Kids drinking skim milk were found to be the fattest of all.

The findings call into serious question the long-held recommendation of pediatricians that parents switch children to low-fat milk at age 2 in order to reduce the risk of weight problems.

It seems this misguided pediatric advice is producing the exact opposite of what was intended.

This large study of 10,700 preschoolers involved interviewing the parents when the children were 2 years old and again at 4 years old.  The researchers took direct measurements of each child’s height and weight in order to accurately calculate BMI (body mass index) at both ages.

Researchers found that the kids who drank skim (1%) milk had the highest body fat regardless of race, ethnicity or socioeconomic status.

Dr. Mark DeBoer said in an email to NPR that he and his co-author Dr. Rebecca Scharf, both of the University of Virginia, were “quite surprised” by the findings as they had hypothesized just the opposite.

Dr. DeBoer added that the data also indicates that the use of low-fat milk did not restrain weight gain in preschoolers over time.  He speculated that if you feel fuller after drinking full-fat milk, “it may be protective if the other food options are high in calories.”

In other words, drinking a glass of whole milk for dinner instead of low-fat or skim milk may prevent a child from eating an extra cookie or two later.

This is not the first study indicating that low-fat and skim milk leads to heavier children.

In 2005, a study published in the Archives of Pediatrics & Adolescent Medicine concluded that skim and 1% milk were associated with weight gain in children aged 9-14, but dairy fat was not.

A more recent study in 2010 published in the Journal of the American Dietetic Association found that switching from whole milk to reduced-fat milk at age 2 years did not appear to prevent overweight in early childhood.

Take-home lesson for parents?  Give your kids whole milk as Grandma and Grandpa did.  Taking the fat out of milk doesn’t help one iota in reducing a child’s chances of overweight and obesity.  On the other hand, giving a child whole milk appears to be protective of a healthy weight in childhood!

Want to learn more about what fats to eat and what fats to avoid to stay slim and healthy?  Check out my eBook Get Your Fats Straight – Why Skim Milk is Making You Fat and Giving You Heart Disease and Other Surprising Facts About Fats.