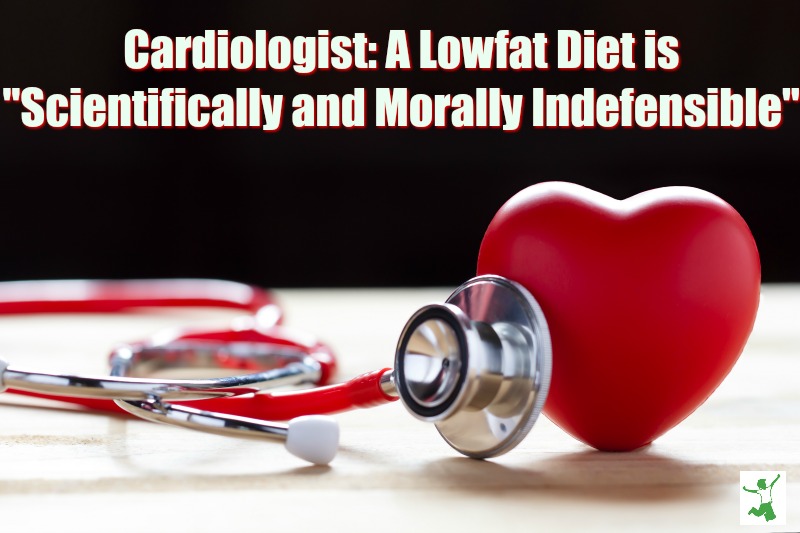 Dr. Dwight Lundell MD is a cardiologist who beat the drum of a low-fat diet and cholesterol-lowering drugs to prevent heart disease for over 25 years.

He has performed over 5,000 open heart surgeries and trained with prominent “opinion maker” physicians who considered any deviation from the recommended therapy of severely limited fat intake and cholesterol-lowering meds to reduce heart disease risk complete heresy that could possibly result in a malpractice lawsuit.

Dr. Lundell now admits that this long-held notion is wrong. Not only is it completely and utterly wrong, but it is also scientifically and morally indefensible.

Following the recommended mainstream diet low in saturated fat and high in grain-based carbohydrates has created an epidemic of obesity and diabetes “the consequences of which dwarf any historical plague in terms of mortality, human suffering and dire economic consequences”.

By following the recommended low-fat diet, Dr. Lundell says that people are unknowingly causing “repeated injury to their blood vessels”.   This repeated injury, day in and day out, is what is causing rampant inflammation across all population groups which has resulted in the epidemic of heart disease, diabetes, and obesity.

Inflammation the True Cause of Heart Disease

Dr. Lundell explains that a slow paradigm shift that identifies inflammation as the true cause of heart disease is occurring.

He goes on to say that the conventional low-fat diet which warns against saturated fats and promotes polyunsaturated vegetable oils as a healthier alternative is the biggest culprit in causing chronic and deadly inflammation.

In other words, it is inflammation caused by a low-fat diet that causes cholesterol to become trapped in the body.  Cholesterol-lowering drugs have been a dismal failure to eliminate or reduce the problem as 25% of the population now takes statin drugs and yet more Americans than ever will die of heart disease this year.

In short, blaming cholesterol for heart disease is like blaming fire fighters for fires.

Dr. Lundell explains the deadly 3 step process of how eating a simple donut or sweet roll causes a cascade of inflammation in the body:

Imagine spilling syrup on your keyboard and you have a visual of what occurs inside the cell. When we consume simple carbohydrates such as sugar, blood sugar rises rapidly. In response, your pancreas secretes insulin whose primary purpose is to drive sugar into each cell where it is stored for energy. If the cell is full and does not need glucose, it is rejected to avoid extra sugar gumming up the works.

It’s not just the refined grains and sugar in the donut causing spiking and crashing blood sugar that is the problem. Dr. Lundell continues by describing additional inflammation caused by the rancid omega 6, polyunsaturated oils (usually soybean) in the donut:

That innocent looking goody not only contains sugars, it is baked in one of many omega-6 oils such as soybean. Chips and fries are soaked in soybean oil; processed foods are manufactured with omega-6 oils for longer shelf life. While omega-6’s are essential -they are part of every cell membrane controlling what goes in and out of the cell — they must be in the correct balance with omega-3’s.

If the balance shifts by consuming excessive omega-6, the cell membrane produces chemicals called cytokines that directly cause inflammation.

The final nail in the coffin for producing exorbitant levels of inflammation when that innocent-looking donut is consumed is the excess weight that most Americans are carrying:

To make matters worse, the excess weight you are carrying from eating these foods creates overloaded fat cells that pour out large quantities of pro-inflammatory chemicals that add to the injury caused by having high blood sugar. The process that began with a sweet roll turns into a vicious cycle over time that creates heart disease, high blood pressure, diabetes and finally, Alzheimer’s disease, as the inflammatory process continues unabated.

Ditch the Lowfat Diet and Get Off the Inflammation Freight Train

Dr. Lundell counsels that mainstream medicine has made “a terrible mistake” by advising people to avoid saturated fats in favor of grain-based foods containing vegetable oils.   This flawed and dangerous recommendation is a direct contributor to the epidemic of inflammation that is plaguing the Western world in the form of obesity, diabetes, heart disease, and numerous other ailments.

Dr. Lundell advises to leave manufactured vegetable oils and other processed foods behind and return to the whole, unprocessed diet of our ancestors.

Given that inflammation and not cholesterol cause heart disease, any concern about saturated fats in the diet is nothing short of “absurd” according to Dr. Lundell.

Heart Surgeon Speaks Out on What Really Causes Heart Disease
The High Risks of Low Cholesterol
Cholesterol Myths to Wise Up About
What Oxidizes the Cholesterol in Eggs?
The 9 Irrefutable Benefits of Cholesterol in the Diet