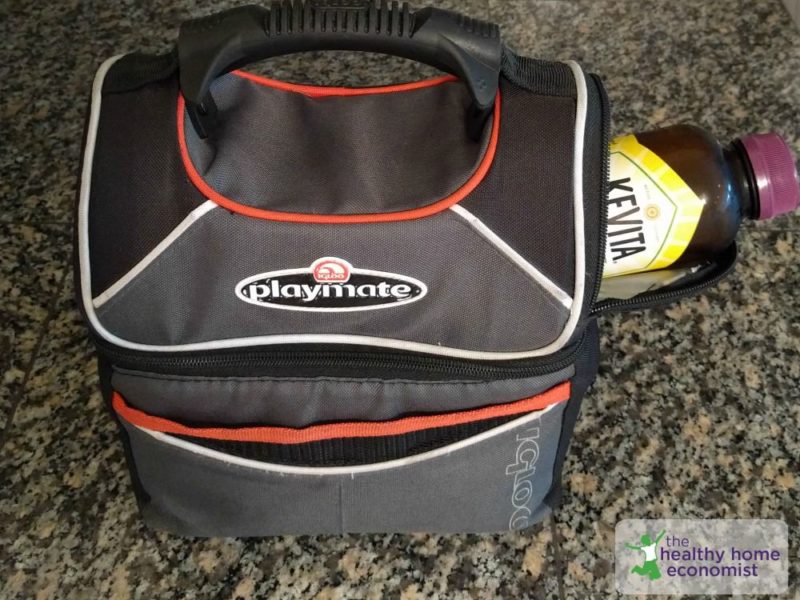 The lunch police have struck again. First, there was the story of a preschooler at West Hoke Elementary School in North Carolina who was given a highly processed, cafeteria lunch containing pink slime chicken nuggets because the school decided that the turkey and cheese sandwich, banana, potato chips, and apple juice her mother packed was not nutritious enough.

Now comes the story of an elementary school boy from Newport Beach, California who was suspended from school this week for the kombucha in his lunchbox that school administration said violated the school district’s drug and alcohol policy.

The boy’s mother contacted me 2 days ago the very afternoon her son was suspended in a plea to help her resolve the situation.

The trouble apparently started because the kombucha drink was packed in a glass bottle which is the appropriate container for this healthy, vitamin and probiotic filled beverage.  The mother even took care to safely place the glass bottle in a foam sleeve as I’ve demonstrated in my videos which is exactly what I do for my own children so that if the bottle is dropped, it would not break and cause harm.  It is important to note that the mother had sent kombucha to school in her son’s lunch many times before with no problem.

When the lunch police noticed the glass bottle safely tucked into the foam sleeve in the child’s lunchbox, they confiscated it.  The next morning, the boy was called into the Vice Principal’s office and interrogated about the drink and where he got it.  The school even called in the Police Officer assigned to work with all the schools in the area.

Most outrageously, the Vice Principal told the boy that he may have to transfer out of that school and that she was looking into it.  She even tried to enroll him in an alcoholics class for teens!   The boy ended up spending the entire day in the school office and then was suspended for 5 days for violating the school’s drug and alcohol policy.  The issue was also reported to the Newport-Mesa School District.  Lest the school or the district deny the child was suspended or try to spin the story, the boy did indeed SIGN a 5 day suspension form.

It is important to note that these events took place without the school even attempting to test the alcoholic content of the kombucha or conducting due diligence of any kind which would have revealed that kombucha is a healthy beverage similar to apple cider and clearly not the equivalent of beer or wine.

The child’s distraught mother managed to get a meeting with the school’s Vice Principal the next morning who informed her that the Principal had decided to retract the suspension and not pursue the issue further.  The child was then immediately allowed to return to school.

Unfortunately, the incident had already been reported to the Newport-Mesa school district so it is possible that the parents of the boy could face additional disciplinary action if the school district decides to pursue the matter.

The worst aspect of this incident is the extreme embarrassment, emotional trauma and shame the child no doubt experienced for being called out by the lunch police and then interrogated like a criminal the next day by school administration and even a uniformed Police Officer!

When I talked to the Vice Principal on the phone yesterday, she acted as if the incident was minor and that everything had been resolved satisfactorily.  What?  Giving a child the third degree in the school office with a Police Officer standing by and no parent present to defend him is no minor scene!

This incident could have far reaching implications for the child’s emotional state and could even result in bullying or snide remarks from classmates for years to come!

For all you traditional cooking Moms and Dads out there who also send healthy homemade foods and drinks in your child’s lunch, it may prove worthwhile to have a discussion with your children about this story and what to do should school administration ever harass them about the contents of their lunchbox.

I will keep tabs on this story in the coming days and if the Newport-Mesa School District decides to do something ridiculous like pursue disciplinary action against this family, I will be sure to let you all know so that the phone lines can light up and public pressure exerted to restore sanity to the situation.

**Update:  Following the publishing of this article, the Newport-Mesa School District issued a press release regarding this incident.  Click here for the full transcript and rebuttal.