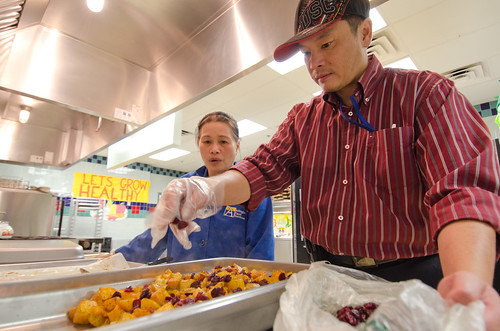 This just in from the Food Police Chronicles ….

A state employee required a preschooler at West Hoke Elementary in Raeford, North Carolina on January 30, 2012 to eat chicken nuggets during lunch because her lunch brought from home was not nutritious enough.

The child’s lunch contained a turkey and cheese sandwich, a banana, potato chips, and apple juice.

The state agent decided that the girl’s lunch did not meet USDA guidelines and required that the child be given a “healthier” alternative.  Furthermore, the state agent apparently inspected all the children’s lunches that day in the four year old classroom.  No word if other children were asked to eat chicken nuggets as well.

The mother of the child who ate the three chicken nuggets, who prefers anonymity fearing retaliation, said she received a note from the school warning her that her child’s lunch was not nutritious enough and that noncompliance in the future could result in fees from the school cafeteria.

Since when are industrially processed chicken nuggets (aka “pink goo”) fried in genetically modified, rancid vegetable oils and nuked in a microwave healthier than a turkey and cheese sandwich and a banana brought from home?

School cafeterias don’t even qualify as real kitchens in most cases as cafeteria workers only have access to giant microwaves that quickly heat up the overly processed, factory fat laden, genetically modifed, agricultural dumping ground food they serve.

Michael Pollan, author of The Omnivore’s Dilemma, says that bureaucratic rules require that schools buy food only from the cheapest bidder.

The sad truth is that only the cheapest, most nutritionless, most highly processed garbage food makes the cut for the school lunch program.

Many parents are choosing to pack their children’s lunches until better food is served at school, but apparently these efforts are being thwarted by the Food Police who are determining that homepacked meals are not up to snuff.

This story is yet another outrageous overstep by an overly aggressive, nanny style government increasingly insistent on raising our children according to its own standards while ignoring our own.

Only a lawsuit is going to stop this sort of thing from progressing and getting worse in the future. Hopefully, this mother can gather her courage and file a legal complaint immediately to force these overzealous government workers back in their bureaucratic box.

5 Ways to Procure Safe Blood (Free of Spike Proteins and Microclots) for Surgery, Transfusions and Emergencies