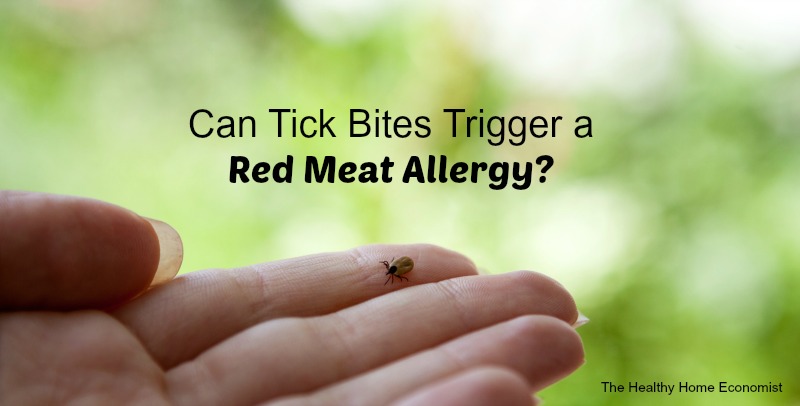 I have noticed a very odd and perplexing trend in recent years. Allergies to red meat seem to be on a slow but definite rise. They are currently most prevalent in the Southeastern United States.

While not a lot of folks I know have this strange type of allergy, there are definitely a few who do and this is something I had never observed prior to just a few years ago.

What is Causing Red Meat Allergies

I have been at a complete loss to explain to folks why they might be allergic to red meat.  I have generally considered it to be yet another symptom of the rampant and worsening gut imbalance problems people subsisting on modern foods and pharmaceuticals suffer from and have advised looking into healing and sealing their gut wall a la the GAPS or SCD protocol with their holistic health practitioner.

Now, there appears to be at least one possible explanation:  tick bites.

The Journal of General Internal Medicine has published an article by Susan Wolver, MD, and Diane Sun, MD of Virginia Commonwealth University. Their research identifies the rising trend of red meat allergies which first appeared in the Southeastern United States.

Dr. Wolver and Dr. Sun stumbled upon this connection by analyzing the case histories of three patients. People with an allergy to red meat, a very new syndrome, wake up in the middle of the night about 3-6 hours after eating red meat for dinner with hives. Worse, a severe, life threatening condition known as delayed anaphylaxis may present.

The reaction is thought to be caused by antibodies to a carbohydrate known as alpha-gal.

A patient produces these carbohydrate antibodies after sustaining a Lone Star tick bite. This same carbohydrate is in all red meat – pork, venison, beef, and lamb.

When the allergic individual consumes these foods, the immune system releases histamine in response to the ingestion of the carbohydrate alpha-gal which is the cause of the hives or anaphylaxis.

Most worrisome, anaphylaxis triggered by red meat appears to be the very first life threatening allergic reaction due to consumption of a carbohydrate rather than a protein.  What’s more, this is the first anaphylaxis that occurs hours after exposure rather than immediately upon contact or ingestion.

Could more carbohydrate induced anaphylaxis be on the way?

The conclusions of Dr. Wolver and Dr. Sun:

“Where ticks are endemic, for example in the southeastern United States, clinicians should be aware of this new syndrome when presented with a case of anaphylaxis. Current guidance is to counsel patients to avoid all mammalian meat – beef, pork, lamb and venison.”

Some red meat allergy sufferers are reporting that their symptoms disappear when they consume only meat from organic grassfed animals fed no GMO animal feed.

While this information is only anecdotal, it seems that the answer to red meat allergies may be much more complex than the effects wrought by a simple tick bite.

Why Fermented Soy Is More Thyroid-Suppressing Than Plain Soy