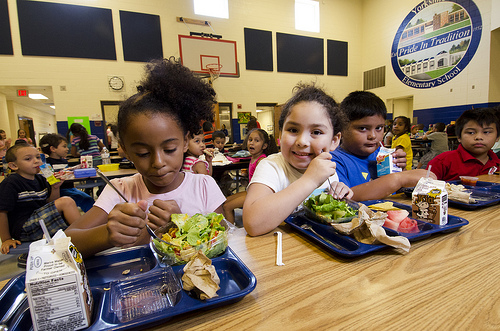 Out of control, bullying public school officials continue their deplorable acts of violation against young children over incidents that puzzlingly seem to typically originate in the school lunchroom.

Recall the recent story of a boy who was suspended from school for five days after being interrogated in the Vice Principal’s office for hours on end, told he was carrying an “illegal” substance, threatened with transfer to another school and warned that he would be enrolled in a teen alcoholics support group after being called out by the lunch police for bringing a simple bottle of kombucha in his lunchbox packed by his own Mother!

Then there was the story earlier this year of a preschooler at West Hoke Elementary in North Carolina who was given a highly processed, cafeteria lunch containing pink slime chicken nuggets because the lunch police inspecting her lunchbox decided that the turkey and cheese sandwich, banana, potato chips, and apple juice her mother packed were not nutritious enough.

Apparently, North Carolina school officials did not learn their lesson from the huge negative publicity and backlash from that stunt because an even worse lunchroom incident has been revealed in a recent lawsuit by The Rutherford Institute.

According to the complaint Cox v the Sampson County Board of Education filed on December 6, 2012, Union Elementary School Assistant Principal Teresa Holmes allegedly strip searched 10 year old J.C. Cox as a result of the chivalrous act of helping a classmate retrieve her dropped coins from under the lunchroom table.

A press release by The Rutherford Institute on the matter describes in detail how the lunchroom incident went down all without a parent or guardian present at any time:

… on Friday, June 12, 2012, J.C. Cox, a fifth-grader attending Union Elementary School in Clinton, N.C., was in the school cafeteria eating lunch when a female classmate dropped money onto the floor.

J.C. went under the table, retrieved the coins and returned them to the girl. Upon approaching J.C.’s table, Assistant Principal Teresa Holmes, who was also in the cafeteria at the time, was informed that someone had dropped $20 on the floor, that the money was missing, and that J.C. had gone under the table in search of the missing money.

Holmes asked J.C. if he had the money and told him that unless he returned it, she would have to search him. J.C. told Holmes he did not have the money.

Holmes then ordered J.C. to come with her to her office. Holmes also called a school custodian and asked him to meet her at the office. Once there, Holmes again asked J.C. if he had the money and again, he told her “no.” J.C. even pulled out his pockets to show that he had no money.

The assistant principal then told J.C. she had no choice but to search him, and that she was within her legal right to do so. Holmes allegedly ordered J.C. to remove his shoes, socks, pants and shirt.

With J.C. stripped to his underwear, Holmes ran her finger around the waistband of his undershorts.

Holmes did not find any money on J.C. While in Holmes’ office, another teacher arrived to report that the $20 had been found on the cafeteria floor.

When J.C.’s mother later contacted the school to voice her concerns about the strip search, she was reportedly told that school personnel have the right to perform strip searches and that the assistant principal was within her rights in doing so.

Attorneys for The Rutherford Institute accuse Ms. Holmes of violating J.C.’s Fourth Amendment rights when he was inexplicably strip searched for stooping down to help out a classmate.  In addition, they cite the 2009 ruling by the U.S. Supreme Court in Safford Unif. Sch. Dist. # 1 v. Redding which ruled that school officials such as Ms. Holmes absolutely do not have the right or authority to strip search a student unless there is evidence that the child is in possession of a dangerous item.

These frequent acts of violation against children and flagrant ignoring of parental rights by public school officials must stop and hopefully with this lawsuit, The Rutherford Institute can make some positive headway in this area.

The lunchroom has clearly become a warzone in many public schools instead of a healthy environment for eating and sharing with classmates that it is intended to be.

Do you have an act of lunchtime bullying by school officials to share?  Please chime in with a comment.

Gum Additives in Food. Which Ones to Avoid?