From Brain Gravel to Heart Attack: The Negative Health Consequences of Calcium Supplements 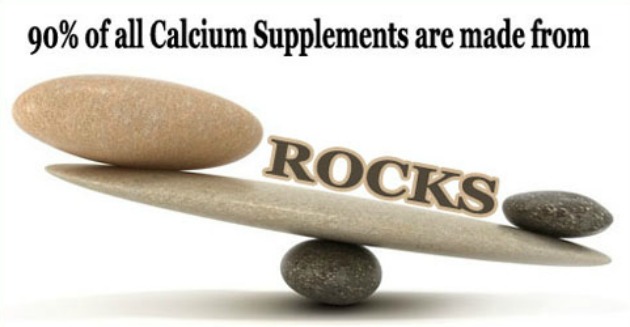 New research published in the journal Heart has confirmed the findings of two controversial studies on calcium supplementation and heart attack risk published in the British Medical Journal from 2011, and which found a 24-27% increased risk of heart attack for those who took 500 mg of elemental calcium a day.[1] [2]

The results of this newest review, involving 24,000 people between the ages of 35 and 64, were even more alarming. Those participants who took a regular calcium supplement increased their risk of having a heart attack by 86% versus those who took no calcium supplements at all.

Why Do We Obsessively Consume Rock, Bone And Shell Calcium?

People really should not be so surprised at the idea that calcium supplementation may be toxic to cardiovascular health. After all, many subject themselves to coronary and cardiac calcium scans in order to ascertain their risk of cardiovascular events and/or cardiac mortality. This is because we know that calcium of the wrong kind in the wrong place can result in serious adverse health effects. There are, in fact, quite a few in the field of nutrition who have long warned against supplementation with elemental calcium; which is to say, calcium from limestone, oyster shell, egg shell and bone meal (hydroxylapatite). There are also those who have not needed to be “experts,” because they exercised common sense when it came to not eating rocks or shells.

The seemingly universal popularity of taking elemental calcium supplements results from the promotional efforts of conventional health “experts” and organizations like the National Osteoporosis Foundation (whose corporate sponsors include the calcium manufacturers Oscal and Citrical). Also, the World Health Organization created a radically new definition of “normal” bone density in 1994 when it took the 25-year old young adult standard (which is peak bone mass in a women’s life cycle), also known as the “T-score,” and applied it to all women, irrespective of their age.

This resulted in redefining the normal and gradual loss of bone mineral density that comes with aging as a disease, essentially medicalizing a non-condition. It also resulted in millions of women being coerced into taking unnecessary (and dangerous) “bone-building” drugs and inorganic calcium supplements to drive bone mineral density higher, by any means necessary. Suddenly, healthy women were being told they had a disease called “osteopenia” or “osteoporosis,” even while their bone mineral density was normal for their age, gender and ethnicity (which would have been clear as day, had the age-mediated “Z-score” been used). Moreover, the #1 and #2 cause of death in women are heart disease and cancer, respectively, with heart attack and breast cancer being the primary causes of morbidity and mortality.

When you consider that the risk of death as a side effect of fracture associated with low bone mineral density is infinitesimal relative to that of dying from calcium-induced heart attack, and/or high bone mineral density associated malignant breast cancer (300% higher risk for those in the top quarter percentile of BMD), the justification for promoting osteopenia/osteoporosis prevention and/or treatment in women’s health above far more serious and likely health threats completely falls apart. In fact, it appears that this myopic fixation may be significantly contributing to their premature death.

Turned To Stone: When Calcium Goes To The Wrong Place

The reality is that the habit of consuming inorganic, elemental calcium simply does not make sense.  After all, have you ever experienced visceral disgust after accidentally consuming eggshell? If you have, you know your body is “hard-wired” to reject low-quality calcium sources (stones and bones as it were), in favor of getting calcium from food.

Inorganic or “elemental” calcium, when not bound to the natural co-factors, e.g. amino acids, lipids and glyconutrients, found in “food” (which is to say other living beings, e.g. plants and animals), no longer has the intelligent delivery system that enables your body to utilize it in a biologically appropriate manner. Lacking this “delivery system,” the calcium may end up going to places you do not want (ectopic calcification), or go to places you do want (e.g. the bones), but in excessive amounts, stimulating unnaturally accelerated cell-division (osteoblasts), resulting in higher bone turnover rates later in life (this is explained in the article below).

Or, the body attempts to disburden itself of this inappropriate calcium and dumps it into the bowel (constipation), or pushes it through the kidneys (stones). Worse, high levels of calcium can accumulate in the blood (hypercalcemia), which can contribute to destabilizing the atherosclerotic plaque through the formation of a brittle calcium cap on the atheroma, can contribute to thrombosis (clot) formation, hypertension (that’s why we use calcium channel blockers to lower blood pressure), and perhaps causing arrhythmias/fibrillation and or heart muscle cramping, or coronary artery spasm (a rather common, though rarely recognized trigger of ‘heart attack’).

The breasts too are uniquely susceptible to ectopic calcification, which is why we use the same x-rays to ascertain bone density that we do to discern pathological microcalcifications in the breast, i.e. x-ray mammography. Due to the fact that the hydroxylapatitate crystals found in malignant breast tissue may act as a cellular ‘signaling molecule’ or mitogen (inducing cell proliferation), it is possible that certain breast calcifications may be a cause, and not just an effect, of the tumorous lesions (“breast cancer”) found there. This may also help to explain why women with the highest bone density (often obtained through massive, lifelong calcium supplementation) have up to 300% higher incidence of malignant breast cancer.

“Brain gravel” is also an increasingly prevalent phenomenon, where autopsied patients have been found to have pebble-size calcium deposits distributed throughout their brains, including the pineal gland (‘the seat of the soul’). The wide range of existing calcium-associated pathologies, and their increasing prevalence in calcium-fixated cultures, demand further investigation and explanation.  One aspect of this, no doubt, is our obsessive cultural fixation on mega-dose calcium supplementation for non-existing “conditions” associated with bone mineral density that is normal-for-our-age, but not for our doctors and the “experts” who guide them with industry-friendly misinformation.

I believe this new research puts the nail in the coffin of any remaining doubt that we should stay as far away from inorganic calcium supplements as possible, as well as the empirically and intellectually bankrupt disease models being used to coerce women into taking them in the first place.

Sayer Ji is an author, researcher, lecturer, and an advisory board member of the National Health Federation. He founded Greenmedinfo to provide the world an open access, evidence-based resource supporting natural and integrative modalities.

Avoiding Hormone Disrupting SOY PROTEIN in the Diet (it is everywhere!)