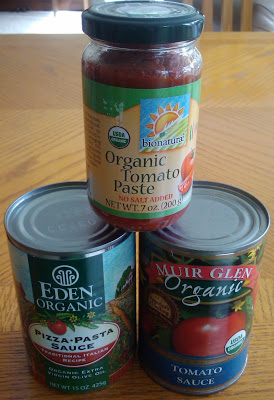 A few months ago, I blogged about how organic canned food is loaded with bisphenol-A (BPA) just the same as cheap canned foods from the supermarket.    Why do we want to avoid BPA?   This chemical is an estrogen mimicker which wreaks havoc on our hormones and is one of the prime suspects in the ever plummeting age at which young girls are going into puberty.

I read an article recently that as many as 10 in 100 white girls, 15 in 100 Hispanic girls, and 25 in 100 African American girls are experiencing breast development as early as 7 years old!

This is a shocking and serious problem not only because of the adult issues it forces upon mere children but also because of the fact that the earlier a girl goes into puberty, the higher her chances of breast cancer later in life.

BPA is also linked with the obesity epidemic, Type 2 diabetes.    The list goes on …..

Parents simply MUST take steps to protect their children from this chemical onslaught by choosing foods that will not disrupt the delicate hormonal balance during their formative years!

The good news is that some organic canned food companies are switching to BPA free cans.

In one of my cooking e-classes last month, I mentioned Muir Glen as one of the companies that currently had BPA free cans.

While Muir Glen is planning to transition to BPA free cans in the near future, its current can liner is not BPA free.

According to the company, Muir Glen cans have a 2 1/2 year shelf life so it “may be a while” before the BPA free cans are on the shelf.

Customer care representative Alexandria Richards claims that the new liner is “safe” and the new cans will be recyclable.

The company also states that the BPA free can labels will not mention that the can liner is BPA free.

This seems like a really dumb marketing move to me.  BPA is a big issue for health conscious consumers.   Wouldn’t it be smart for an organic foods company that makes the move to BPA free cans to TRUMPET this info on the label?

Since there is no firm date for release of the new Muir Glen cans and the BPA free cans won’t be acknowledged on the label, it seems to me that a switch to another organic food company that uses BPA free cans is wise.

In my shopping, I have switched to Eden Organics for the canned foods I do buy (which isn’t many).   Eden Organics has been using a BPA free liner since 1999.

Don’t you just love a company like Eden Organics that makes the switch to BPA free cans just because it is the right thing to do and long before consumer pressure forces its hand which is how all the other organic canned food producers are behaving (yes, I’m talking about you Muir Glen)?

The steel cans used to package Eden Organics products are lined with a baked-on c-enamel that is made of a non-toxic mixture of an oil and a resin from plants such as pine or balsam fir.     The downside is that products in BPA free cans cost more, so not only will the consumer have to pay more for the organic food inside of the can, but also more for the can itself!

Please note that ALL organic canned tomato products, even Eden Organics, are still packaged in BPA cans.    This is because the FDA has not approved a BPA free can for acidic foods as of yet although I am told that this process is in the works.

So for now, consumers must choose tomato products that are packaged in glass to avoid BPA.   I’ve been using the brand Bionaturae for this very reason.

* This post is shared at Real Food Wednesday and Pennywise Platter.

Cheerios Tests Off the Charts (AGAIN) for Roundup