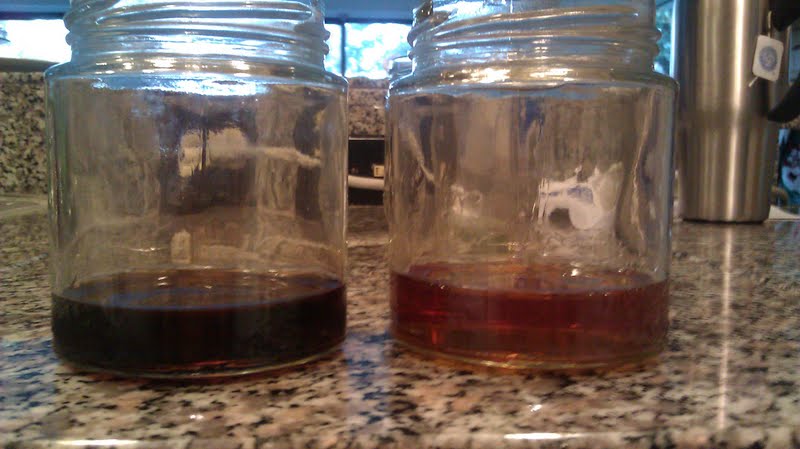 Maple syrup is a traditional and whole sweetener that has consistently played an integral part of the economies of North America ever since Native Americans first taught the early European settlers how to tap maple trees and boil down the sap.

Maple syrup derived early in the season at the time of the spring thaw runs sweet and clear. It takes about 20-30 gallons of boiled down sap to make one gallon of light amber colored syrup, labeled as Grade A. This is the maple syrup typically available in the supermarket.

Late in the season, maple sap thins out and grows watery. Much more than 20-30 gallons of sap must be boiled down to yield Grade B maple syrup of equal sweetness. Boiling down more sap to concentrate the sweetness also concentrates the flavor and nutrients. This late season syrup is darker, more maple flavored, and higher in minerals than the Grade A syrup and is labeled as Grade B.

The Growing Popularity of Grade B Maple Syrup

I’ve been a fan of Grade B maple syrup for years and have enjoyed the lower price point despite its relative rarity in comparison to Grade A.

As consumers have moved further away from refined sweeteners in recent years, however, the price of Grade B has risen as has its availability.

Years ago, I used to be able to call up my maple farmer in Chautauqua, New York who I got to know spending summers there as a youth visiting the farmer’s market on Saturday mornings and ask for a few gallons of Grade B to be shipped and it was no problem.  Then, it became much harder to come by.   In addition, the price for this homely sweetener kept going up with Grade B sometimes even higher in price than Grade A!

The first time this happened, I thought it was just a simple mistake because the next gallon I got was correctly labeled Grade B.  Then, the “mistake” happened again and then again.

At that point, I realized that this might be happening on purpose – the Grade B was sold out so some gallons of Grade A were labeled as Grade B maple syrup to meet the increasing consumer demand with the hope that the consumer wouldn’t notice the difference.

Then I heard of this happening to other folks buying maple syrup from other sources as well!

Make Sure Your Grade B is Really Grade B

The motto of this story is to check your Grade B maple syrup and make sure you are really getting what you paid for!

More change is on the horizon, however!

By 2013, new international standards for labeling maple syrup will come into effect with the term Grade B no longer used.

Once these new standards come into effect, all maple syrup will be labeled Grade A with four identifying colors:  Golden, Amber, Dark, and Very Dark.

Have you purchased what you thought was Grade B maple syrup only to discover that it was really Grade A?  If so, what did you do?  Did you complain or just switch suppliers?

Please note also that there is a significant difference between conventional and organic maple syrup producers. This article spills the beans on these little known production practices that will have many consumers switching brands in a hurry!

Do you just love Grade B maple syrup? If so, here’s a healthy, homemade maple kombucha salad dressing to try.

Sugar in the Raw That’s Not