Healthy Home Economist / Archives / Healthy Pregnancy, Baby & Child / The Reality of Donor Breastmilk Banks (what no one ever tells you) 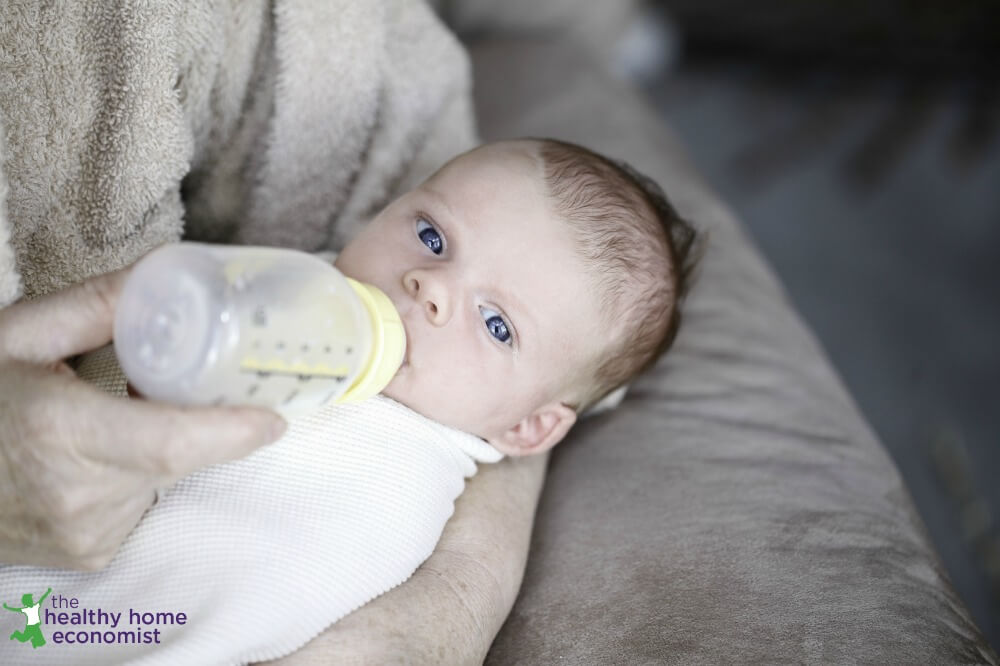 One of the most controversial topics surrounding the issue of breastfeeding is what a woman should do if she finds herself unable to nurse her baby. An even more prickly subject is whether learning how to make homemade baby formula is a good idea.

I myself nursed all three of my children for an extended period of time. The first two were nursed for two years and the third for three and a half years.  I practiced parent led weaning for the first 2 children as I did not want to be nursing and pregnant at the same time. For my third and youngest child, I simply allowed her to wean herself whenever she chose.

I’ve often considered what I would have done should I have found myself unable to nurse. Certainly commercial formulas are not a good option as these highly processed powders are loaded with rancid vegetable oils and denatured proteins.  Even the organic baby formulas on the market should be avoided for this reason.

What about homemade baby formula made with milk, kefir, or yogurt from grassfed cows or free roaming, foraging goats?  Would this formula be superior to human breastmilk from a donor milk bank?

To me, most folks’ opinion on this issue basically boils down to whether they feel that human breastmilk is suitable for an infant regardless of the diet of the Mother.  I am of the persuasion that the breastfeeding Mother’s diet is critical to the nutrient density of her breastmilk. I wrote about this in an article commenting on the news story about a vegan Mother whose breastfed baby died.

Science is backing this up. Published 2019 research found that the diversity of beneficial probiotics varies greatly from woman to woman perhaps due to dietary factors.

Color and Creamline of Breastmilk Varies Based on Diet

I know from personal experience how my diet affected the color and thickness of my breastmilk.  With my first child, I ate everything organic but did not consume many traditional fats or sacred foods. My breastmilk was white with little cream on the top.  My baby was also hungry all the time and wanted to nurse frequently.  He also spit up a lot which I now know was my consumption of pasteurized organic dairy and improperly prepared grains during that time.

With my next 2 children, my breastmilk went from white to beige and had considerably more fat simply by adding lots of butter, cream, egg yolks, grassfed meat, and fish eggs to my diet.  As an added bonus, my children were satisfied more quickly and stayed full much longer between feedings.  They also never spit up unless I ate out at a restaurant or had consumed some low quality, non-Traditionally prepared food for whatever reason.

I sure wish I had frozen a few ounces of that breastmilk before and after my Real Food conversion.  A picture would have been worth a thousand words!

Because the vast majority of women do not follow a Real Food, Traditional diet and because I so clearly observed the difference in my own breastmilk when I made the change myself,  I would have chosen to make a homemade baby formula with raw milk from grassfed cows instead of seeking donor breastmilk.

To me, it would have been way too risky and far too likely that the donor breastmilk would have come from Moms drinking coffee or diet drinks, eating fast food, taking over the counter prescription drugs and the like.  At least with grassfed cows, you know what they are eating and that they aren’t taking any drugs!

Then there’s also the huge problem that many donor milk banks pasteurize the breastmilk!

And, no, the “Holder method of pasteurization” used by breastmilk banks is just as damaging as conventional pasteurization at dairy plants.

I give my opinion on this topic with one caveat.

If I could have found a few Moms that I knew who were eating a Real Food diet, I definitely would have accepted their breastmilk donations for my child if necessary.

But, from a donor milk bank, this information is 100% unknown. And, with Real Food Moms in the minority, using donor milk is just not worth the risk.

What about you? Would you have chosen homemade formula or a donor breastmilk bank?  Why or why not?