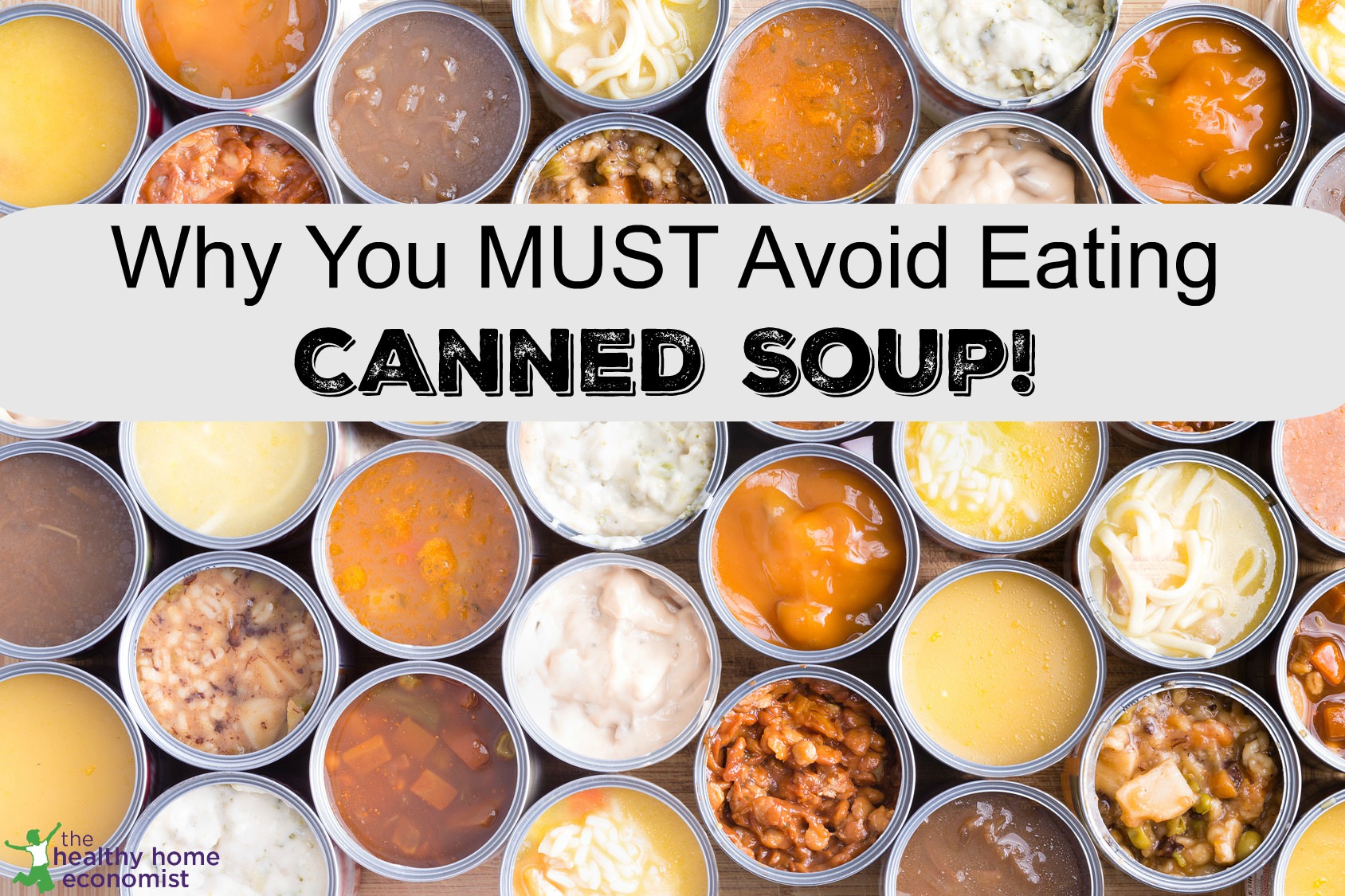 Attention!  Class is about to begin.

Let’s get started with today’s lesson in healthy living. Operation Take Back Your Health is now underway:

Step 1:  Walk to your kitchen pantry and open the door.

Step 2:   Remove all canned foods especially canned soup. Yes, even the organic ones.

Yes, the trash. That’s where they belong. Don’t give them away as this is simply passing on the curse of ill health to another unsuspecting soul.

Step 4:  Do your very best to never, EVER buy anything in a can again.

If you’ve been a reader of this blog for any length of time, you know that canned food is something that is very much a detriment to your health. The reason is not just because the food is nutritionless due to the high temperatures and pressures required during processing.

Possibly the most worrisome problem of all is that almost all brands of canned food, except for a very few organic ones, contain the endocrine disruptor bisphenol A. This chemical, better known as BPA, is part of the can lining. It is a byproduct of the chemicals used to prevent corrosion. Those that don’t contain BPA contain a very similar chemical known as BPS, which is just as dangerous!

Why are BPA and BPS such a HUGE, HUGE problem, particularly for our children?

Because they are linked to massive hormone disruption with the serious problem of early puberty, ADHD, obesity, Type 2 diabetes, and the list goes on and on and on.

Think this problem is overblown? Consider this.

Currently, as many as 10 in 100 white girls, 15 in 100 Hispanic girls, and 25 in 100 African American girls are experiencing breast development as early as 7 years old!  The earlier a girl goes into puberty, the higher her chances of breast cancer later in life.

Now comes the news that the BPA in canned foods raises urine levels of this dangerous chemical much more than previously believed.

In a study published yesterday in the Journal of the American Medical Association, participants who ate canned soup every day for only five days had urine levels of BPA that were 1,221% higher than those who instead ate soup made with fresh ingredients and homemade broth.

Karin Michels, an associate professor of epidemiology at Harvard University and leader of the study, said, “To see an increase of this magnitude was quite surprising.”

Michels added, “We are concerned about the influence of [hormone-disrupting] chemicals on health in general, and BPA is one of them.”

The study included 75 people whose average age was 27.  Progresso was the only brand of soup that was tested.  This is the first study to actually measure the BPA levels in urine using randomized participants eating food that was either canned or fresh.

Study researcher Jenny Carwile, a doctoral student at Harvard made the following observation.

We’ve known for a while that drinking beverages that have been stored in certain hard plastics can increase the amount of BPA in your body. This study suggests that canned foods may be an even greater concern, especially given their wide use.

A number of studies have linked BPA with a host of health problem. In 2008, a study of 1,455 participants showed that higher urine levels of BPA were linked with higher cardiovascular disease, diabetes, and abnormal liver enzymes even when factors such as smoking and age were taken into account.

Other studies have shown a correlation between BPA in a pregnant woman’s urine and resultant health problems in her child.

How much more evidence is needed?  Wise shoppers who are truly concerned about the health and the potential for estrogen dominance from exposure to BPA will consistently bypass all canned foods on their trips to the supermarket or the health food store!

Have no idea how to make fresh soup?  Relearn this traditional culinary wisdom by learning how to make homemade stock and bone broths as an important first step.

Are Raw Egg Whites Healthy and Safe to Eat?

How to Clarify Broth into Clear Stock

The Latest Research on the Benefits of Vitamin K2