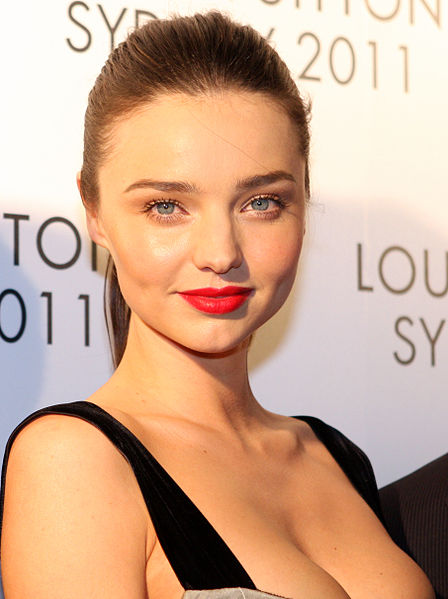 The more I read about Miranda Kerr, the more I like her.

Last year, the 29 year old supermodel from Australia who is married to actor Orlando Bloom refused to cave in to pressure from the anti-saturated fat lobby by publicly professing her love of coconut oil with the following statement:

“I will not go a day without coconut oil. I personally take four tablespoons per day, either on my salads, in my cooking or in my cups of green tea.”

Mmmmm, let’s see.  Shall we listen to fat, unhealthy looking doctors with expensive vacation homes and yacht payments telling us to avoid coconut oil because it will give us a heart attack who are incidentally getting kickbacks or special perks from drug companies on the amount of cholesterol lowering prescriptions they write, or …

Shall we listen to a woman who is sharing her secret for shiny hair, trim figure, and clear skin which has been used by attractive, healthy Polynesians for centuries who suffered virtually no heart disease whatsoever?

Now, Ms. Kerr has once again stirred up a hornet’s nest with her comments about the dangers of epidurals published as part of her interview in the August 2012 issue of Harper’s Bazaar UK.

Miranda states that she decided to forgo an epidural with the recent birth of her son after observing in baby bonding videos that babies born to mothers who had epidurals did not instinctively go for the breast and appeared out of it and “drugged” unlike babies born to mothers who had not submitted to pain medication who went straight for the breast and were alert and looking around:

“The baby was a little bit drugged up, and I was like, ‘Well I don’t want that.’ I wanted to give him the best possible start in life I could.”

Dr. Deborah Stein, who practices obstetric anethesiology at St. Luke’s Roosevelt Hospital in New York, fired back by insisting that there “is no concern of epidural anesthesia on a newborn baby.”

Yeah right, doc.  A little concerned about those yacht payments are we?

Mother and parenting forums also blasted Kerr saying that she should more carefully choose her words.  Mary Fischer who writes for TheStir said that “women just need to respect each other.”

Give me a break.  Isn’t the health of babies a lot more important than, sniff, mommy’s feelings (does anyone have a hankie?).

The reality of the situation is that epidural babies are drugged and if a woman can possibly avoid these medications (of course, sometimes she cannot), it is indeed giving her baby a better start in life. At the very least, a natural birth gives baby and Mom a better shot at a successful breastfeeding relationship with a normal latch and suckle more likely from the start.

Good for you, Miranda, for sticking to your guns and showing once again that a supermodel isn’t necessarily just a pretty face and can be a force to be reckoned with in this age of false and misleading health propaganda from those who are supposed to “know” the most!

The Myth of Mandatory School Vaccinations