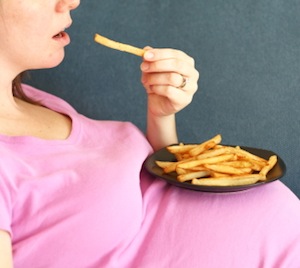 New research from the University of Adelaide in Australia and published in the Journal of the Federation of Societies for Experimental Biology has uncovered scientific evidence regarding what many mothers already knew with simple common sense.

Eating junk food during pregnancy and lactation can lead to children who are already addicted to junk food by the time they are weaned.

The team of scientists led by Dr. Bev Muhlhausler, Postdoctoral Fellow in the University`s FOODplus Research Centre, is the first to study and demonstrate the biological effects of maternal junk food consumption on offspring at an early stage in their development.

The study examined two groups of lab rats. One group ate a normal rat diet during pregnancy and lactation. The other group was fed a lot of junk food. After the babies were weaned, the Australian research team tested their neurochemical responses to junk food consumption.

When junk food loaded with factory fats and sugar is consumed, chemicals called opiods are produced. In turn, these opiods stimulate the production of dopamine, the pleasure hormone.

The mother rats that ate junk food while pregnant and nursing had baby rats that were less sensitive to this opioid signaling pathway than those that didn’t eat junk food.

Less sensitivity to the opioid or “reward” pathway leads to wanting and needing more junk food in order to experience the pleasure response from the neurological system. With this study, Australian researchers have shown that some babies have a predisposition to eat junk food before they are even born!

In short, eating junk food during pregnancy and lactation could very well result in children who have an increased preference for junk food.

Dr. Muhlhausler has strong words regarding the consumption of junk food during pregnancy and lactation:

“Mothers eating a lot of junk food while pregnant are setting up their children to be addicted.

The take-home message for women is that eating large amounts of junk food during pregnancy and while breastfeeding will have long-term consequences for their child’s preference for these foods, which will ultimately have negative effects on their health.”

Can the child consuming a healthy diet after weaning compensate for an unhealthy maternal diet during pregnancy and lactation?

Unfortunately, the initial research from further work in this area indicates that alterations to the opioid receptors are permanent.

“Although our research shows that many of the long-term health problems associated with maternal junk food diets can be avoided if offspring carefully follow a healthy diet after weaning, they are always going to have a predisposition for overconsumption of junk food and obesity. It’s going to make it much more difficult for them to maintain a healthy body weight.”

What should a pregnant and nursing mother be eating?

According to the Weston A. Price Foundation, the following guidelines for pregnant and lactating mothers give the best odds for a healthy, robust child as produced generation after generation by Traditional Societies following their native diets:

IMPORTANT WARNING: Cod liver oil contains substantial levels of omega-3 EPA, which can cause numerous health problems, such as hemorrhaging during the birth process, if not balanced by arachidonic acid (ARA), an omega-6 fatty acid found in liver, egg yolks and meat fats.  Please do not add cod liver oil to a diet that is deficient in these important animal foods. It is important to follow Traditional Diet for pregnant mothers in its entirety, not just selected parts of it.

Sources:  Crave Junk Food When You’re Pregnant?   So May Your Baby

Diet for Pregnant and Nursing Mothers