by Sarah Pope / Affiliate Links ✔
By Guest Blogger Paula Jager, CSCS
After thoroughly covering our CrossFit hierarchy I would like to share some of our success stories and what it can do for those of us that do not make our living through athletics yet are “athletes’ nonetheless. . .

Meet Lizette. Lizette began training in March 2009; she was 32 years old, 40 pounds overweight, on high blood pressure medication, borderline high cholesterol, fatigued all the time and ready for a change within her life. Her physical and nutritional assessment revealed poor cardio respiratory conditioning, limited strength and a high carbohydrate diet. She was doing no exercise and could not jog 100 m without stopping. The photos below show Lizette when she started and 6 months later following a consistent exercise routine as well as a nutritional overhaul. Fast forward to the present–she has maintained her 40 pound loss, been off the meds for over a year now, cholesterol at optimal levels, runs a 7:23 minute mile, has completed 2, 5K’s, her strength has quadrupled, fatigue is but a distant memory and she is preparing for grad school in addition to working full time and consistently training 5 days a week. Life is good. 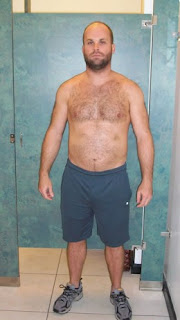 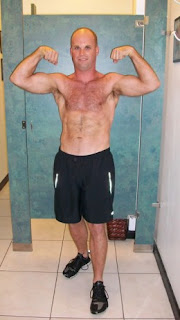 Meet Kevin. Kevin was an excellent runner and in fairly good athletic condition when he joined us. He ran consistently, did a small amount of weight lifting and presented with moderate strength. He was about 15-20 pounds overweight which was not bad considering his intake of fast food and beer on a regular basis. He immediately took to the challenge of the workouts and trained consistently 5 days a week, begging for a Friday night class so he could get in 6. His strength doubled within the first 12 weeks. He wondered why he wasn’t losing the body fat which I told him was largely a matter of nutrition. During our 2010 January Fitness Challenge, Kevin put the same all or none efforts into his nutrition, lost 20 lbs, 8% body fat, increased his strength and performance even more and he now runs a 5:45 mile. He began buying pastured meats and eggs, cooking at home, became a regular reader of Sarah’s blog and even makes his own kombucha. Kevin is now a part time Coach at CrossFit Jaguar. Before one can teach others, you must practice what you preach. He is a shining example of that. 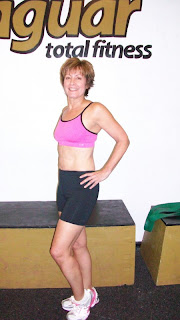 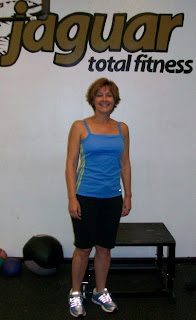 Meet Sandy, aka Spunky. Sandy is a longtime friend of mine that I “grew up with”. She started training with us in January 2009 after being discouraged with minimal results from her many years of running but did very little to no weight lifting. She was about 15+ pounds overweight, 56 years old and attributed her fatigue, and lower belly weight gain to being post menopausal. Just have to deal with it right? Not! Sandy was also eating heavily of refined carbohydrates to give her “energy” for the excessive endurance exercise she was doing. We revamped her nutritional protocol WAP style and within the first month her energy levels shot through the roof. She started lifting weights in addition to cutting back on the longer runs and her body began to sprout definition, she was smoking people 30 years hers junior and imagine this–losing body fat! Within 2 months she had dropped over 16 pounds, was now called “Spunky” for her new attitude when she bounded into the gym, felt better than she had in years and literally had to fight off her husband of 20 years who still thanks us to this day for the change in his beautiful wife. BTW, he’s the one that’s tired nowïŠ
These are real people and these are real results–by products of the right exercise and the right nutrition which brings forth amazing transformations. Begin at whatever level you are; the important thing is the direction in which you progress from there–for we are judged by what we finish not by what we start.