by Sarah Pope / Affiliate Links ✔
In this post for our new Fit Friday series, friend and fellow blogger Paula Jager teaches us how to best stay fit like Traditional Man.  Paula does a regular TV spot for ABC Action News in Tampa, FL and writes a monthly column for Natural Muscle magazine.  Paula follows the principles of traditional eating in her home and teaches her clients not only how to move properly but how to eat properly.  I am thrilled that she will be contributing her extensive knowledge about fitness to the Healthy Home Economist on a regular basis! 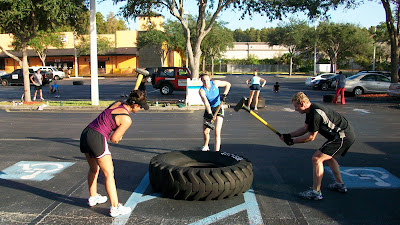 Anyone regularly reading this blog would agree, as Sarah has so well shown that nutrition is the foundation for optimal health and well being upon which we build. It’s well established that hunter-gatherers eating their traditional, whole-food diet (whether Inuit, Masai, Swiss or whatever else) displayed little to no signs of the degenerative diseases that so plague modern civilization. Infection, warfare and pestilence were occasional sources of poor health outcomes but for the most part they were very healthy. In other words, they weren’t dying from a lack of statins or chemotherapy.
They also were physically active. They had to be, dinner was not found on a menu or a grocery store shelf. And when hunting, gathering or wrestling a wriggling fish from a river physical prowess increased the chances of success. The average “hunter-gatherer”–modern or Paleolithic–is going to be healthier than the average modern sedentary human. If you exercise you will be fitter than those who don’t. It’s a pretty simple concept. 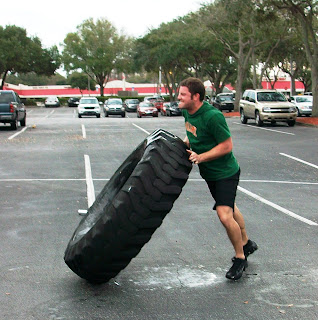 Fossilized remains implicate that “Grok” had a fair amount of muscle on his body. The human fossils evince higher levels of mineral bone density than our modern counterparts. Strong, dense bones are hallmarks of physically active people engaged in weight bearing exercises. The science is very clear on this; bones are living organs which respond to stimuli, much like muscle does. Exerting oneself and lifting weights (barbells or fallen game) tells your body to build stronger ones.

Although civilization has forever changed our lives from those of Paleolithic man our basic nutritional needs along with the need for movement have not. We now are driving cars instead of walking, working office jobs instead of hunting and foraging and sleeping in fluffy beds rather than bracing the elements of the outdoors. In order to have the robust bone structure and intense physicality of our ancestors we must still move like them. I am not suggesting you give up the modern conveniences or the incredible advances that have been made but rather engage in an optimal fitness regimen–one that closely resembles that of traditional man. . .
CrossFit–the prescription is best described as functional movements, constantly varied and performed at high intensities. The aim has been to forge a broad, general and inclusive fitness designed to improve: cardiovascular/respiratory endurance, stamina, strength, flexibility, power, speed, coordination, agility, balance and accuracy or life in general. These are the 10 recognized general physical skills; ones that Grok possessed that enabled him to thrive over those that merely survived or didn’t. The goal is not to specialize but to optimize competence in each domain which carries over to competence in life. The program maximizes neuroendocrine response, develops power, and uses multiple training modalities and functional movements. It may be scaled for all fitness levels.
Modern humans need a fitness or strength-training regimen such as CrossFit along with following a meat-and-animal-fat-heavy diet. Doing merely one or the other will only give you half the results; in other words, if you eat like traditional man you must also move like traditional man to be physically impressive and obtain optimal health and well being like our ancestors did.
Stay tuned for next week as we further explore the CrossFit prescription . . .

Warm Up and Stretching: Neglect Them at Your Peril

How to Train Right For Your Body Type