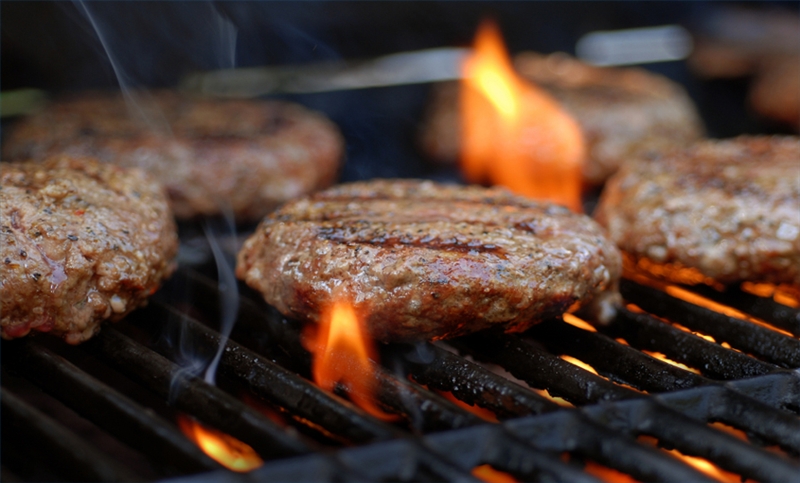 Hamburgers and grilling are perhaps two of America’s more enduring traditions and the barbecue season is now in full swing. A common question asked by S. Paine on Facebook went as follows:

“I am all for eating beef but I read that barbecue method of cooking is bad. Supposedly, it forms carcinogenic compounds called heterocyclic amines (HCAs) and also components called polycyclic aromatic hydrocarbons (PAHs). It’s said that cooking meat in the oven is much less harmful. Is it true or not? What’s your take on barbecue grilling as a cooking method?”

Great question! Here’s some food for thought on the subject.  In an article titled, Is there any safe way to grill foods?, Judy Foreman writes:

“The problem with grilling any kind of protein – red meat, poultry, fish – is that the process causes formation of two cancer-causing agents: HCAs, or heterocyclic amines, and PAHs, polycyclic aromatic hydrocarbons, said Karen Collins, nutrition adviser to the American Institute for Cancer Research. Laboratory data show these substances trigger the cancer process, and while data in humans are limited, there is suggestive evidence that they can also trigger cancer in people.”

Sally Fallon Morell addresses the topic of barbecue in several places in her book Nourishing Traditions.

P. 355: Always buy “regular” full-fat ground meat but avoid cooking hamburgers and sausage on the barbecue, where flames can come in contact with the fat and form cancer-causing substances. Cook hamburgers and similar meats in a heavy, cast iron skillet to minimize carcinogen formation in the final product.

p. 32:  Research indicates that meats cooked at very high temperatures contain elevated amounts of carcinogens.(1) Meat should be eaten raw, rare or braised in water or stock. Avoid processed meats such as sausage, luncheon meats and bacon that have been preserved with nitrites, nitrates and other common meat preservatives. These are potent carcinogens that have been linked to cancer of the esophagus, stomach, large intestine, bladder and lungs. Traditionally, sausage was a healthy, high-fat product containing nutrient-dense organ meats and preserved through lacto-fermentation, a process that actually increases nutrients; while bacon was preserved through salt curing and smoking. These delicious old-fashioned products will return to the marketplace with consumer demand. Charcoal grilled meats and smoked foods contain chemicals called polycyclic aromatic hydrocarbons that are used to induce cancer in laboratory animals, yet our ancestors ate liberally of smoked meats and fish without suffering from high levels of cancer. There are probably factors in traditional diets that protect against these carcinogens. Modern man is best advised to eat smoked and barbecued meats sparingly.

In a number of Sally’s recipes however, she writes something very similar to, “Grill under broiler or on barbecue for 5 to 10 minutes per side, depending on thickness of fish. Be careful not to let the fish burn.” So, she does not shy away from barbecue completely.

“The lactic-acid producing bacteria in the fermented vegetables are the perfect antidote to carcinogens which may have formed in the meat if it has been barbecued.”

To help you reduce the amount of harmful substances produced when grilling, here are Dr. Mercola’s 10 healthy barbecue tips:

1. Marinate your food before cooking. Soaking your steak in red wine or beer for six hours before grilling can cut levels of two types of HCAs by up to 90 percent. Studies show that a marinade containing olive oil, lemon juice and garlic can also lower HCA levels in grilled chicken by as much as 90 percent. An acidic marinade containing lemon juice also helps reduce the amounts of AGEs in your food.

4. Keep the coating thin to avoid charring your meat. Don’t eat the black or brown parts.

8. Avoid grilling hot dogs, bratwurst and other processed meats, as these seem to be among the worst offenders.

9. Choose only high-quality, organic and grass-fed meats for your barbecues.

Another question that was posed: Are gas grills safer than charcoal? “From what I can tell, there’s nothing inherent in gas or charcoal that makes one safer than the other.

You can make the case that since (a) production of dangerous chemicals is linked to high heat, and (b) the heat level is easier to control in a gas grill by adjusting the gas flow and rack height (in some grills, anyway), gas grills are safer. But that’s speculation.

Personally, I think as a celebratory experience, such as Fourth of July, we may indulge in this “compromise”. Others have expressed to me that they don’t buy into the notion that barbecued meats are dangerous at all: “people have been cooking meat over fire since, well, since they started cooking meat. If it was so dangerous, the human race wouldn’t have survived, much less flourished. The cancer rate has sharply risen due to chemicals in our environment and the effects of processed foods, not due to too many backyard barbecues.”

It’s fine to grill meat, even red meat, once a week or so during cookout season, said Dr. George Blackburn, a nutritionist at Beth Israel Deaconess Medical Center and associate director of the Division of Nutrition at Harvard Medical School. As Blackburn put it, “We don’t want to ruin the joy of family get-togethers.”
What do you think? To barbecue or not to barbecue?

Sandrine Love is the founder of Nourishing Our Children, which provides educational materials that individuals use for self education and/or to present to an audience. In 2006, she was named an Activist Award winner by the Weston A. Price Foundation and serves on its Honorary Board.

The Ideal Traditional Diet for Pets
Next Post: 7 Steps to a Traditional Foods Way of Life