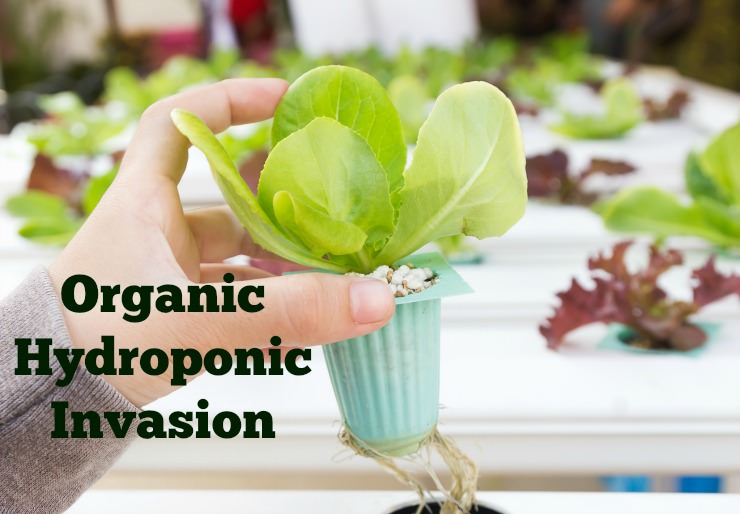 Those of you who have been eating organic produce since before 2010 have no doubt noticed a relentless and continuing decline in quality in recent years. This deterioration has occurred simultaneously with the increased availability of organics at places like Super WalMart and Target.

Persistent examples I’ve noticed of organic produce that doesn’t live up to its top tier reputation include: overly large, water logged strawberries and raspberries that rot and start to mold within days of purchase, bagged organic salad mix that rots long before the “use by” date, cucumbers and peppers that taste bitter and are soft in the middle despite a firm feel in your hands at the market, and celery that is woody, tasteless and nearly impossible to chew.

When I first started purchasing organic produce in the early 1990s, this type of thing never occurred. Organic produce was consistently tasty and long lasting in the vegetable bin in the refrigerator. I didn’t need any tricks or gadgets like the BluApple or FreshPaper produce saver sheets to keep my produce edible.

The truth is that nutrient dense, high quality produce shouldn’t rot or mold easily. In fact, one of the clearest signs of high brix (nutrient dense) produce is that it will actually start to grow in your veggie bin. Carrots and onions, for example, will sprout new shoots. Root vegetables which get soft or moldy instead of sprout new growth is a worrisome sign of inferior produce and low nutrition, not just a sunk cost in the food budget.

Hydroponic Produce is to Blame

The reason why organic produce isn’t as good as it used to be is the rapid and widespread proliferation of hydroponic produce labeled USDA Organic. Hydroponics is a technology for growing plants with their roots immersed in water with dissolved fertilizers often containing synthetics. An inert, nutritionless medium like peat or coconut fiber might also be used in place of the soil with the roots periodically bathed with a fertilizer solution. Aeroponics, a related practice eschewing soil, grows plants in an air or mist environment.

Despite its popularity today, hydroponic production was never mentioned in the Organic Foods Production Act (OFPA) of 1990. In addition, the widespread inclusion of hydroponics within the USDA Organic program since 2010 has occurred despite the formal objections of the National Organic Standards Board (NOSB), and the refusal to issue any guidance or regulations on the industry by the National Organic Program (NOP).

The NOSB first attempted to define the term organic in 1995 and it was described as follows:

In its recommendation to formally exclude hydroponics from the USDA Organic program in 2010, the NOSB further stated that “Growing media shall contain sufficient organic matter capable of supporting natural and diverse soil ecology. For this reason, hydroponic and aeroponic systems are prohibited.”

To date, the NOP has issued no guidance on the issue despite the NOSB urging rulemaking action on the situation.

Hydroponic Not to Be Confused with Aquaponic

When fish are added to a hydroponic system, it is called aquaponics – the integration of aquaculture and hydroponics.

Such a system cycles nutrient-rich water from fish tanks to naturally fertilize and irrigate, aka “fertigate”, the plants. This is considered a highly sustainable system as the water is recirculated and reused with the plants acting as natural biological filters. Synthetics are never used as part of the process.

However, because aquaponics does not involve stewardship of natural and diverse soil ecology, it still should not be considered organic according to the NOSB.

Most Countries Do Not Allow Hydroponics to be Labeled Organic

The vast majority of organic hydroponic produce sold in the United States is grown in Mexico, Canada, or Holland. What’s so hugely ironic is that this very same produce cannot be labeled organic in the the country where it’s grown. It has to be shipped to the United States to obtain the coveted organic label.

How the Hydroponic Invasion of USDA Organic Occurred

How has hydroponics so effectively taken over the USDA Organic produce market in such a short time with the NOSB formally recommending against it?

According to the Cornucopia Institute, the reason is because of the National Organic Program’s failure to issue any guidance or regulation on the situation for such a long time. This caused some accredited certifying agents (ACAs) for the USDA Organic program to declare “full steam ahead” and certify hydroponic farms to augment their revenue base. How many is anyone’s guess because certifiers are not required to state whether an organic farm is producing crops hydroponically.

Pressure came to bear when a petition to the NOP from David Chapman, an organic farmer in Vermont, asked to formally accept the NOSB recommendation. He was joined by the National Organic Coalition (NOC) which released a position paper on hydroponics in February 2014 in support of the NOSB recommendation saying, “Organic farmers are not just tillers of the soil, but also stewards of soil ecology on the farm. Until a clear definition has been provided by the NOP, (organic) certifiers should not be allowed to certify hydroponic systems.”

In response, the NOP stated on its website in February 2014 and again in its May 2014 quarterly publication that organic hydroponic production is allowed.

This simple statement in no way constitutes rules or regulations that are specific to hydroponics, however. No guidance has been given to the organic certifiers who are bringing these farms into the USDA Organic program about the use of synthetics, water quality and other issues with hydroponics.

How to tell if produce was grown hydroponically? Unfortunately, nothing on the label will clue you in. With strawberries and sometimes cucumbers, it is easy. If they are huge, they are water logged and most likely hydroponic. Also, if the produce comes from Mexico, Canada, or Holland, it’s a good bet that it is hydroponic. With other produce, it’s not that simple.

One good way to tell if produce was grown in carefully tended, nutrient rich soil is to look for the word “biodynamic” on the packaging. Unfortunately, biodynamic and organic produce is still in the minority.

The best way to avoid hydroponics is to note which farms you are buying from that have produce that doesn’t last when you get home or taste very good when you eat it. Continue to buy only from those farms that are producing the good stuff no matter if it is organic or not. A phone call to the farm to confirm growing practices is a good idea if you want to avoid the trial and error approach.

There is one local, conventional farm near me that I have started to buy cucumbers from. Even though they are conventional, the cucumbers taste far better (which indicates superior nutrition) and last longer than the huge organic hydroponic ones at the healthfood store that taste bitter, are soft in the middle and rot quickly.

Keep the Soil in Organic

If this issue concerns you and you would like to lend your opinion, click over to this petition to the National Organic Program to urge them to “Keep the Soil in Organic”.

The Organic Hydroponics Dichotomy: Can a Soil-Less Growing System Be Organic?
Organic Hydroponic Produce? Not for Me
4 Steps to Keep Monsanto OUT of Your Garden!
Heirloom vs Hybrid Produce
Is Organic Really Any Better?

What is the Best Affordable Organic Mattress?