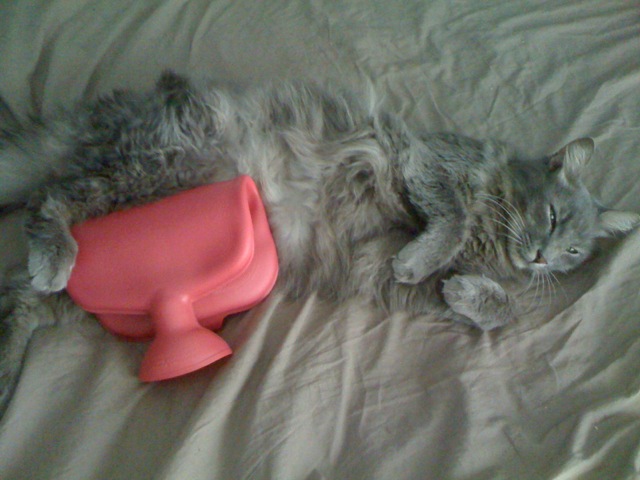 My husband Preston and I are quite fond of cats and share our home with 7 of the little darlings.

It is my practice to do a head count every morning upon waking, every evening before bed and even when I come home after being out for several hours.  Last Wednesday (10 days ago), I realized around 4:00 in the afternoon that I had not done my morning head count and had not seen Casey (one of the twins!) all day.

I examined him to find a bump below his belly in the groin area.  It was very large and tender and he would not let me feel around it.  I went into action making our bedroom a “sick-room” and brought in a litter box, food and water and put him on our bed.  He stayed there for the night, getting worse and worse.

The next day I was able to see the bump/lump better.  It was huge!  I thought I could see a tiny hole – like from a bee sting.  I was looking for two holes from a pair of fangs as the little sweetie had brought us a black snake the previous week – still squirming and very much alive, but all I saw was this huge lump and maybe a little hole.

So, I thought the lump needed to be aspirated and I called a nearby Western medicine vet and took him in.  It is my practice to use Western vets for diagnosis and then bring them home for holistic treatments.  In this case, I thought intervention was called for.

The Vet examined him (and ignored my comment about a bee sting hole) and stuck in a needle to aspirate. Nothing came out.  Well, a little did, enough for him to put on a slide to look at under a microscope.  He came back all solemn telling me it was not pus but very large white cells that he could not identify.  I remained calm.

He said we needed to test him for Feline Leukemia/AIDS. And, he recommended exploratory surgery.  It would be a big deal to cut that lump out and it could be cancer. I remained calm.

He told me my other cats were at risk for FeLeuk and AIDS and I should have them all tested. I remained calm.

I thanked him and paid him my $40 and took my baby (who was a total champ throughout the whole process, never uttering a sound) to the car. Before I left the parking lot I called a Homeopathic vet I use that lives near Ocala FL and left a message.

I have used this holistic vet with great results for over 3 years.  What’s surprising is that I have never met the man.  All of the treatments/therapies have been via phone consultations.  He has even helped with behavioral problems!

An hour later Dr. Wessner (352-245-2025) called me back and I gave him Casey’s recent history.  He told me to give him two homeopathic remedies (that I had on hand), some plant-based enzymes to help his body absorb the material in the lump and he was sending me another remedy that I did not have.

Within 15 minutes of giving him the two remedies, Casey rolled over on his back – his favorite position and one I had not seen him in for 2 days.  With that, I took the opportunity to place a hot water bottle on the lump. He remained on his back, but repositioned himself to clamp his leg over the bottle. Is this picture worth 1000 words?  There is nothing more adorable than a trusting animal.

I kept up the hot water bottle and about 4 days into this the lump started draining. He licked it all the time. When he wasn’t licking, I was applying the bottle (which causes the material to liquefy and drain).  He was the best patient.

We went down this path for days…actually, more than a week.  I gave him the remedies, plus the enzymes, plus some powdered whole food Vitamin C.  At its zenith the lump was the size of a half a plum; huge for a 14 pound cat.
He did have a set back where I thought he felt worse, but the next day he rebounded and started getting happier and happier and becoming more animated.  Last night he actually gave Preston his “high cry”… his cry asking to be put up high on a set of bookshelves – one of his favorite places.  I was worried about the jump down so he remained four on the floor for the time being.

He is still recovering.  The lump is almost gone.  He prefers our bed (his sick bed) for deep resting, but purrs easily and is moving around a lot.  He never lost his appetite completely but has lost some weight.  He is getting pureed chicken liver daily to speed his recovery.

The upshot of this story?  Imagine where I would be today if I had followed the first vet’s advice?  My sweetest of cats would be recovering from surgery, our wallet would be quivering and I would never forgive myself for putting him through those traumas.

So, please don’t let a vet (or any doctor) scare you into the action they advise without seeking other consultations…the first being your gut.  That is why I remained calm…I knew he was not that sick!  I also know what I do to keep him healthy (like feeding high quality healthy cat food and filtered spring water).

Raw milk from time to time is on the menu too.  I also knew I had Dr. Wessner in my back pocket!

It took a little more work and a lot of trust by Casey, but I expect him to be giving us his “high-cry” for many years to come!

It is now 2 weeks since I took Casey to the Western vet and then called Dr. Wessner, my holistic vet.

The swelling was completely gone after about 11 days from the first dose of homeopathics recommended by Dr. Wessner. What remains now is a little area bare of hair (from his licking) and two perfect little scabs.

Looks like a snake got him. Again, I am so glad I decided to follow a holistic path instead of the horrors of surgery and more.

Casey is feeling 100% himself.  I saw him prancing in the yard yesterday and he has given us his “high cry” everyday.  WHEW!

One other really cool thing that has come of this: he has become a real Mama’s boy and and we have really bonded.  He gets it that I played a big part in his healing.  He is grateful.  He is sleeping more on the bed with us and sometimes, out of nowhere, he will come up to me and rub my legs asking to be picked up.  SWEET!

Cynthia Calisch is the Sarasota Chapter Leader for the Weston A. Price Foundation. She blogs about traditional diet at her website Cynthia’s Traditionals.

How to Make the Switch to Raw Pet Food