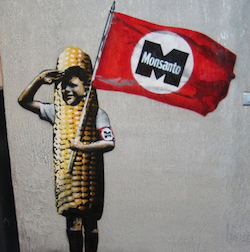 If you ever doubted that the executives of Monsanto believe themselves to be above everyone and everything – even the Law – well then, try this one on for size.

Fresh off victory over Prop 37 in California last month which would have required the labeling of GMO foods, Monsanto is trying to one up all of us yet again.

An omnibus appropriations bill for 2013 is currently being drafted behind closed doors by the House and Senate Appropriations Committees with the hope that it will be put to a vote and passed before January 2013.

The lame duck Congress combined with a public distracted with the upcoming holiday season has provided Monsanto with the perfect opportunity to score a fast one.

Monsanto lobbyists are pushing for a rider to the appropriations bill deceptively cloaked as the “farmer assurance provision”.

The true purpose of this biotech rider is to allow Monsanto to cut off the public’s access to the courts in order to stop its rapid and accelerating introduction of new GMOs to the marketplace.

According to the Organic Consumers Association, the Monsanto Rider would give the Secretary of Agriculture the power to grant a temporary permit for planting or cultivating a genetically engineered crop, even if a federal court has ordered the planting be halted until an Environmental Impact Statement is completed!

This Rider would in essence give Monsanto power that is above the law and beyond the courts. Previous court cases have recognized the right of farmers to grow non-GMO crops and the rights of consumers to eat non-GMO foods. Contamination from new GMO crops where an Environmental Impact Statement hasn’t even been completed yet is a very real threat and judges recognize this fact.  As a result, Monsanto is trying to bypass the courts completely with this Monsanto Rider sneak attack.

Congress intends to try and pass the 2013 Appropriations Bill before the end of the lame duck session in January 2013 when the new Congress will take over power.

It is imperative that we all pull together to stop this rider from inclusion today!

Click here to fill in your zip code and name which will then automatically find your appropriate US Representative and Senators and send them a letter drafted by the Organic Consumers Association urging them to oppose any efforts to include the Monsanto Rider in the 2013 Appropriations Bill.

You can read the Monsanto rider here: http://appropriations.house.gov/uploadedfiles/bills-112hr-fc-ap-fy13-agriculture.pdf  (see page 86 of the pdf).