What to Do if You Accidentally Eat Gluten 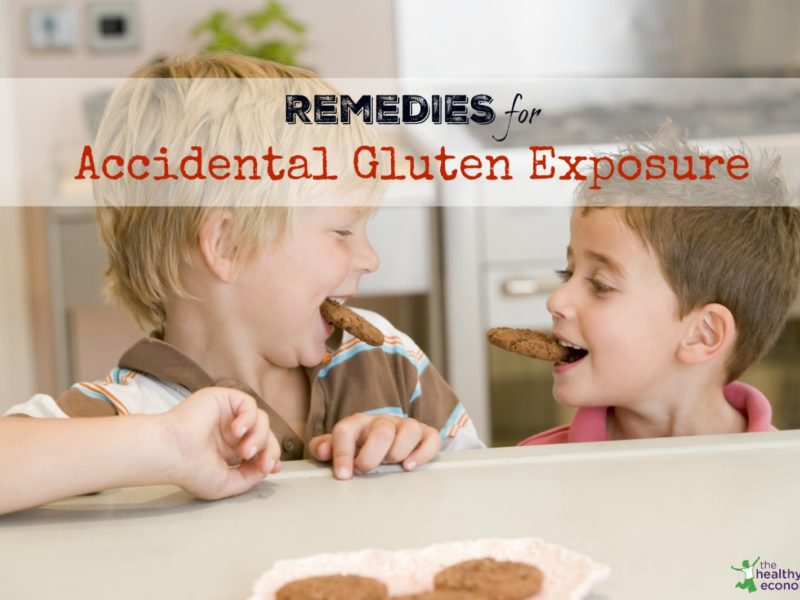 A common occurrence is the potential for those who are Celiac or suffer from gluten intolerance to accidentally ingest it while traveling or at a restaurant.

Even with a small amount of gluten exposure, uncomfortable relapse symptoms can suddenly manifest. This can drag on for days or even weeks. Literally a single bite of a gluten-containing cookie could be the trigger.

What to do in this situation?

Why is Gluten Intolerance Skyrocketing?

The incidence of Celiac has increased by more than 4 fold in the past 50 years! (1)

The exact reasons remain a bit of a mystery. However, a prime suspect is the increased gluten content of modern wheat from radiation-induced hybridization techniques developed during the Green Revolution. An ironic name given what actually happened, don’t you think?

Other likely culprits include glyphosate spraying of wheat crops and rapidly increased consumption in the Western diet.

These combined with exposure to a number of environmental toxins and associated microbiome damage from pharmaceuticals such as antibiotics and oral contraceptives (two-thirds of young women use them) created the perfect storm for an epidemic of gluten intolerance.

Sourdough or Einkorn for Gluten Intolerant?

Some gluten intolerant individuals are able to eat ancient, non-hybridized einkorn wheat that contains “good gluten“. Others cannot. Certainly, neither of these choices is appropriate for those with the genetic condition known as Celiac disease.

Caveat: There is research that indicates that Celiacs can safely consume sourdough bread. However, more research needs to be done to nail down how long the dough must ferment, which probiotic strains break down gluten the best, and so on. Another danger is that most of the store sourdough bread commercially available is fake! Hint: If you want the real deal that won’t cost an arm and a leg, it is a good idea to learn how to make sourdough bread yourself.

For the time being at least, gluten avoidance seems to be the best policy for those that are genetically gluten intolerant.

Unfortunately, the suggestions I have come across with regard to resolving accidental exposure to gluten primarily focus on relieving the immediate discomforts such as stomach upset, gas, bloating, cramping, and diarrhea. Peppermint tea and other herbals, Pepto-Bismol, bone broth, rest, and hydration are commonly suggested. (2)

These are not the biggest problems to think about, however. What about the multi-systemic inflammatory response that spreads from the intestines and the subsequent production of gliadin antibodies? In children, gluten and severe tooth decay can go hand in hand too.

This domino effect from gluten exposure to a cascade of multi-system, immune system modulated effects can set back healing for many months!

In my view, it is best to try to short circuit the body’s response to gluten instead. Only addressing the inevitable symptoms can still lead to many day, weeks or months of suffering.

In the event of accidental gluten exposure, there are a couple of options to consider that address the root of the problem.

The first option that has some scientific backing is using food enzymes. But which ones?

Researchers have discovered a couple of food-grade enzymes that can help break down small amounts of gluten in the digestive tract. Specifically, aspergillopepsin (ASP) from Aspergillus niger and dipeptidyl peptidase IV (DPP IV) from Aspergillus oryzae may provide a temporary crutch. (3)

These enzymes are available at many healthfood stores. Some pharmacies carry it over the counter too (suggested sources). It might be wise for those who are extremely sensitive to consider carrying some at all times much like a person allergic to bees would carry an epi-pen.

Another option is to treat inadvertent gluten consumption like you would a case of food poisoning. Many in the health community already consider modern hybridized gluten to be an environmental toxin. (4)

Why not treat it like one if you are sensitive?

In this situation, using activated charcoal powder is an excellent alternative. This very fine, black powder blocks toxins from damaging tissues and quickly escorts them out of the body via the excretory system.

This process is called adsorption, which is the opposite of absorption. Adsorption is the process by which substances (i.e. gluten) are taken into or stick to the outside of the adsorbent medium, in this case, activated charcoal powder. This prevents the gluten from affecting the nearby tissues. It’s as close as you can come to not ever having eaten the gluten at all.

The only downside is that activated charcoal not only blocks the toxins, but it also prevents the metabolism of nutrients too. So, only use it in a true “gluten emergency”. Frequent use can lead to nutritional deficiencies! Do not ever use this remedy on a regular basis.

I travel with a small bottle of activated charcoal – always. Whether experiencing a tummy bug on the road, food poisoning from a restaurant or accidental gluten exposure, a couple of capsules as directed on the bottle with a glass of water taken immediately and again a few hours later can provide a quick and effective remedy.