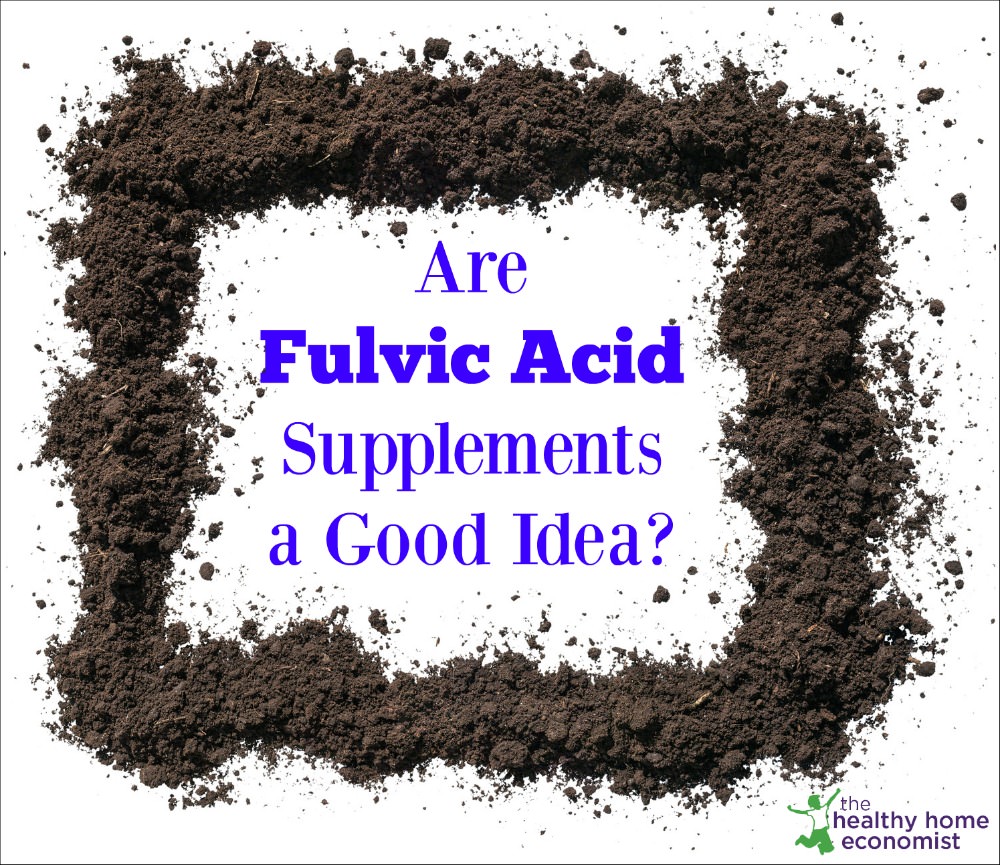 As a kid, I always thought this was an insult. But now, I realize that even if a kid meant it that way, it actually isn’t such bad advice.  Touch dirt. Feel dirt. Spend time in and with good dirt. But also, in a real sense, eat dirt. Or, at least, eat certain things that make up good dirt. Soil-based probiotics. Nutrients and minerals. How about its other organic components? Enter fulvic acid.

Acids play a very important part of healthy soil. Most people are familiar with humus – it is a carbon-based set of compounds (organic in chemistry jargon) that give healthy soil its deep, rich color. Humus forms as plant and other living materials breakdown. Compost, like humus, is made up of decomposed organic material.

Organic acids such as humic and fulvic acid are some of the components resulting from this natural process of decay of plant and animal matter.

While both fulvic and humic acid form through similar biological processes, they have a few key differences. Fulvic acid as a supplement is preferred over humic because it is far more reactive. This has to do with the differences between the two acids.

Most notably, fulvic acid is smaller in molecular size. This characteristic allows it to penetrate the cell membrane and even the mitochondria (powerhouse) within the cell. Humic acid cannot do this. The low molecular weight of fulvic acids has higher oxygen but lower carbon content than high molecular weight humic acids.

Perhaps most importantly, humic acid is only water-soluble at higher pH values. By comparison, fulvic acids are soluble in water under all pH conditions. (1)

In plants and soils, both are used as bio-stimulants. In other words, they encourage optimal soil biology and other processes, increasing nutrient exchange and uptake in plants. (2)

There is a fair amount of research on fulvic acid, though much more is needed. For instance, one study found it is an effective topical treatment for eczema. (3)

Another study found it may be beneficial against the progression of Alzheimer’s disease. Because of its highly reactive nature, it may help remove heavy metals and other toxins from the body. (4)

Some of the best food sources of fulvic acid are organic vegetables and blackstrap molasses. Obtaining this nutrient from food is the safest way to go! More on this below.

With regard to fulvic supplements, however, many benefits are claimed, but unproven. This is especially true with its supposed benefits for athletes, muscle recovery, and performance. Buyer beware!

Fulvic acid advocates state that it results in better mineral absorption. The existing research agrees, but with some important caveats and warnings.

Let’s explore these dangers and cautions in more depth. Anyone considering taking fulvic acid supplements should consider each of these very carefully first!

There are a few different concerns in the research about fulvic acid. First, it can interact in a negative way with medications such as prescription pharmaceuticals. It can also interact with natural medicines (herbal and otherwise) and various supplements.

Fulvic acid may increase the risk of hemorrhage when taken with drugs that increase the risk of bleeding. Some examples include aspirin, anticoagulants (blood thinners) such as warfarin (Coumadin®) or heparin, antiplatelet drugs such as clopidogrel (Plavix®), and nonsteroidal anti-inflammatory drugs such as ibuprofen (Motrin®, Advil®) or naproxen (Naprosyn®, Aleve®).

Because fulvic acid contains estrogen-like chemicals, the effects of other agents believed to have estrogen-like properties may be altered.

That’s a really long list! Suffice it to say that if you take any sort of prescription or over-the-counter drugs regularly, it would be very wise to consult with your practitioner before commencing any fulvic acid supplementation regimen.

Interactions with Herbs and Dietary Supplements

Natural substances can also interact negatively with ingested fulvic acid supplements. This is particularly worrisome given the rapid growth of functional foods and beverages in recent years. The widespread availability and clever marketing of herb containing foods and drinks have the effect that many consumers regularly ingest nutraceuticals that they might not otherwise choose to eat.

For example, because fulvic acid may increase the risk of bleeding, supplements that thin the blood such as ginkgo biloba may contribute to the problem just like blood-thinning drugs. An estimated 2% of people knowingly consume gingko biloba supplements, but many more consume it unknowingly. (5)

Another caution is due to fulvic acid’s estrogen-like chemicals. Taking with foods which also have estrogen-like properties may result in a compounded or altered effect.

Since a large percentage of people now rely on herbs at least seasonally to assist with various health conditions, the addition of fulvic acid to the diet could be problematic. For example, stinging nettle is a very popular herb for fertility teas. Many people use it for seasonal allergies as well due to its powerful anti-histamine effects.

Other Concerns with Fulvic Acid Supplements

Because fulvic acid is a highly reactive substance, some health practitioners are concerned about its impact on severe conditions such as cancer. If someone takes it at high doses or for prolonged periods, this increases the concerns.

While the concentrations vary, they tend to be low but The Environmental Defense Fund still cautions: “… it is precisely these low levels that cancer scientists believe are responsible for the majority of human cancers in the United States.” (6)

With all of the above concerns, it bears repeating to make sure you consult your health care professional if you decide to use fulvic acid.

Even if you get the green light to use fulvic acid therapeutically as part of your diet, there is still another issue to be aware of.

The final concern with fulvic acid and fulvic acid supplements is purity. Manufacturers obtain fulvic acid from concentrated deposits found in and under the earth. These deposits may occur in areas with high concentrations of heavy metals, radioactive ores, and other contaminants.

For instance, one fulvic acid supplement tested at a startlingly high 2700 parts per billion (ppb) of lead, 600 ppb of arsenic, and very high amounts of copper and nickel. Its aluminum was off the charts at over a million parts per billion! (7)

Dr. Lawrence Wilson MD warns against taking fulvic acid due to toxic metals which will harm the liver. (8,9)

The contamination problem prompted Canada to issue a warning to consumers over this and a number of other such supplements. (10)

Are there possibly super clean fulvic supplements? Perhaps. But is it worth the risk to try and find one and take it anyway? Consider how many supplements and powders considered safe that have tested positive for contamination over the past few years. Spirulina is a good example.

This is very much a supplement where the cure is (potentially) worse than the disease!

Even if you are a savvy consumer and know to avoid fulvic acid supplements for the above reasons, be aware that some companies do not clearly label when their products contain it in significant amounts.

One example is whole shilajit powder, pills, and capsules. Mumijo paste is another commonly used name. In its raw form, it is a sticky, tar-like, mineral-rich substance pressed out from within layers of mountainous rock. Some manufacturers even market it as a superfood due to its use within Ayurvedic medicine.

Modern shilajit products contain 2-6% fulvic acid, but you have to dig to figure this out. The packaging usually just says “Shilajit”, “Himalayan Shilajit Powder”, or “Shilajit Extract”.

If you choose to use these products, be sure of their purity and consult with your practitioner for any contraindications for your particular condition.

So, where does all this leave us? For a few conditions that have clear research supporting fulvic acid’s efficacy, it might be wise to consider trying it as another natural approach. I would suggest only doing this IF I could find a brand that had tight testing protocols to ensure purity and other approaches were tried first but didn’t help.

Until more research is in, while I am all for eating dirt, I am a bit cautious about eating decomposing, highly reactive by-products of microbiological decay! But under the right circumstances, I would possibly recommend someone use it on their plants and soil since that is where this stuff truly belongs!

3 Minerals Your Skin is Craving

Pollen is Not The Problem