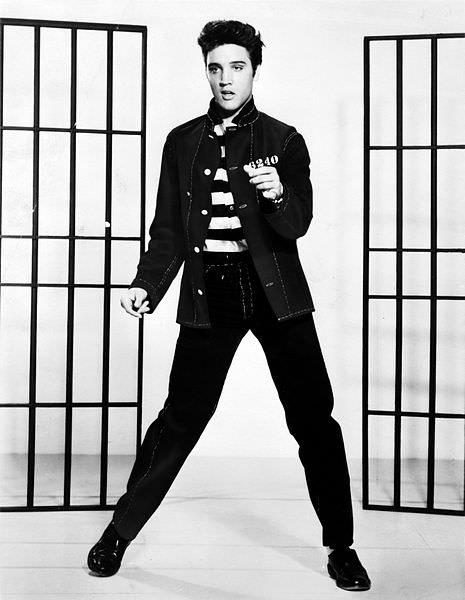 The doctor who was with Elvis for the last 12 years of his life and tried to revive him the day he died claims in his book, The King and Dr. Nick, that Elvis died from severe constipation, not cardiac arrhythmia as popularly believed.

Dr. Nick also claims that The King’s bloated appearance and obesity were due to his constipation and not from overeating the wrong foods.

In addition, the doctor asserts that he was in talks with a surgeon to have part of Elvis’ colon removed to relieve the constipation which was causing embarrassing accidents on stage.

Elvis, however, would have none of it. Perhaps all those hip-swinging motions he was famous for performing onstage had a practical aspect as well!

The story reminds me of the rumored autopsy performed after John Wayne’s death that purportedly revealed that the actor’s colon weighed 82 pounds at the time of his death from colon cancer.

While this report has, by and large, been discredited, it does seem plausible that if someone in otherwise ill-health suffered from severe constipation for many years and yet continued to eat regular meals…day in and day out…that the colon would elongate, stretch, and become much larger and many times heavier than a normal, healthy colon.

Severe constipation is known to be a major contributor to the development of colon cancer as well.

While we will never know for certain the exact cause of Elvis’ passing let alone John Wayne whose personal physician doesn’t seem to ever have spoken about the matter, there is little doubt that severe bathroom issues would have hastened their demise especially as they got older.

Constipation is not an issue that should be ignored as an inconvenience and dismissively treated with a morning bowl of All-Bran. It should be addressed as a warning sign from the body that gut imbalances exist and that an overhaul of the diet needs to be considered along with the use of a vetted therapeutic strength probiotic (such as this brand) to re-establish dominance with those beneficial organisms that are the ultimate gatekeepers of gut health and immunity.

How to Identify a Safe Green Vegetable Powder