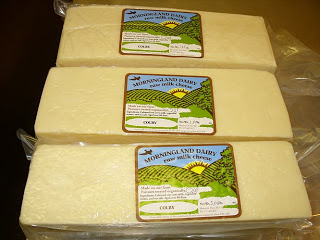 America is at war. This war is not being waged in the streets of Baghdad or the mountains of Afghanistan.

This war is being waged against the small farms of America by the Executive Branch of the US Government, specifically the USDA and the FDA.

Recall the illegal raids on the Rawsome Club in California (guns drawn on unarmed citizens) and the Gestapo-like seizure of thousands of pounds of cheese from Morningland Dairy and Estrella Creamery.

Neither Morningland nor Estrella’s products have ever sickened anyone and the testing procedures used to support this “guilty until proven innocent” search and seizure are dubious and unscientific!

Most small farms targeted for persecution are unable to withstand the financial pressure from such a raid and go out of business.

These types of raids are increasing across the country and they MUST BE STOPPED. The only way to do so is with money and public opinion.  If these farms can muster the financial support to have their day in court, THEY WILL WIN just like Michael Schmidt did in Canada.  The law is on their side, but they are small and defenseless and need our support.

Below is the trailer for the new documentary Farmageddon.   Let’s all pull together so that the frightening reality painted by this film is never allowed to come to fruition.

With a US President whose family enjoys raw milk (his chef buys it locally in South Florida), perhaps the bureaucratic war against family farms will ease and perhaps even end. Many regulations have been rolled back so far. The new tax law protects the transfer of family farms to the next generation without an undue tax burden, so this too is a promising development.

The best thing you can do is stay informed and be prepared to fearlessly defend the family farms in your community which you patronize!