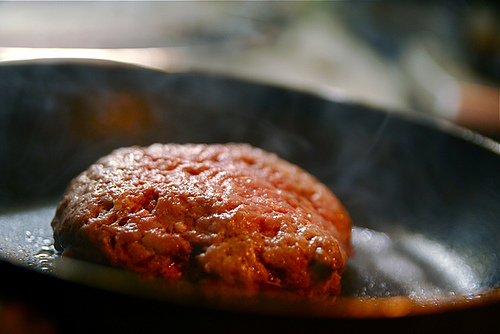 It is a big day for the biotech industry in its global quest to profit from every single meal you consume whether it be animal or plant based fare.

The very first publicly available frankenburgers were eaten in London by two  volunteers as row upon row of VIPs applauded, TV cameras rolled and cameras flashed.

I wrote about the impending debut of lab meat less than two years ago. At the time, Dr. Mark Post of Maastricht University said, “I’m hopeful we can have a hamburger in a year.”

In reality, it took a few more months for the first hamburgers to be ready with the biggest problem being the whiteness of the lab meat due to the lack of myoglobin, the iron carrying blood protein that gives meat its color.

This biotech challenge was solved with the addition of a little beet juice and saffron for “natural” color along with the lab-grown bovine beef muscle cells, salt, egg powder, and enriched breadcrumbs.

Dr. Post did the honors by cooking up and serving the frankenburgers himself at the high profile tasting.

All together now, “Ewwwwwwwwwww!”

Proponents of lab grown meat say that development of this technology and widespread availability is critical to head off a “looming” food crisis and an environmental catastrophe due to rising population and a growing demand for meat in countries such as China and Brazil. Plant-based protein substitutes like seitan and soy protein have helped somewhat, but the popularity of these products has not taken hold in mass markets.

Sounds like very effective, sob story, save the world marketing to me – the same baloney used to promote GMOs.  Dr. Mark Post said in a statement in advance of the tasting:

“What we are going to attempt is important because I hope it will show cultured beef has the answers to major problems that the world faces.  Our burger is made from muscle cells taken from a cow. We haven’t altered them in any way. For it to succeed, it has to look, feel and hopefully taste like the real thing.”

Mmmmm.  The bovine muscle cells haven’t been altered in any way?  That must mean that products containing them would be labeled “natural”, right?

People for the Ethical Treatment of Animals (PETA) is very excited over this technology so much so that the organization is sponsoring a $1 million prize for the first venture to commercialize the production of lab-grown chicken meat.

Does this mean that some vegans might consider eating lab meat? Apparently so.

Fortunately, lab meat at the supermarket is still years away as the price tag for each lab burger currently runs in the hundreds of thousands of dollars. You can bet when it becomes commercially available, however, that inroads into the consumer market will happen with dizzying speed such as what happened with GMOs which now are in approximately 80% of supermarket foods and were rare only a decade or so ago. It’s not just packaged foods either. In the summer of 2012, large quantities of GMO sweet corn appeared on grocery store shelves and roadside stands and sold as “fresh” produce.

Other technologies in the works for creating lab meat for the consumer market include California-based Modern Meadow which is working on 3-D printing techniques for creating artificial meat as well as artificial leather from cultured cells.

Modern Meadow co-founder and CEO, Andras Forgacs, said that commercial leather products grown in a lab will be available within the next few years.  He predicted that meat would take longer due to technical and regulatory complexities.

Forgacs’s own father cooked up and ate a 3-D-printed pork chop during a TedMed presentation in 2011.  He is excited about the frankenburger tasting stating:

“This is a field that’s going to require innovation from many corners of the world. I hope this creates more awareness for this emerging field of technology.”

You can be sure that biotech lobbyists will have a field day with this technology, spending millions schmoozing elected officials and government bureaucrats into looking the other way when it comes to proper labeling of these foods. Perhaps the GMO labeling bills already in the works should be revised before legislative vote to include requirements for proper labeling of lab meat as a preemptive step to avoid yet another grassroots battle in the years to come.
Sarah, The Healthy Home Economist
Sources:

Eating Lowfat Yogurt While Pregnant a Danger to Baby