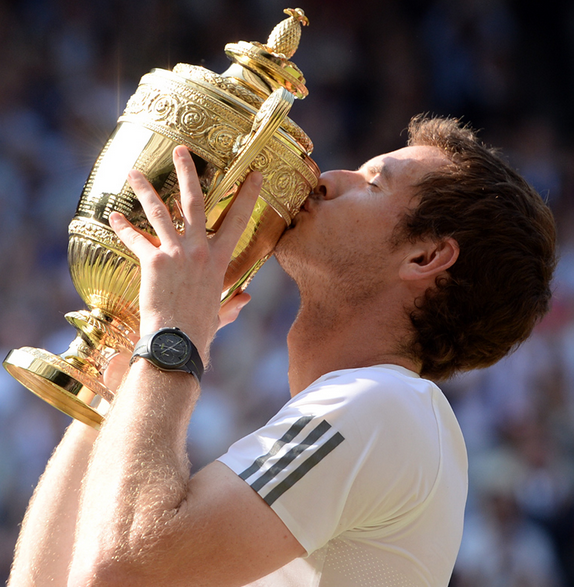 Andy Murray’s dramatic Wimbledon victory this weekend was doubly sweet for the 26 year old Scot. Not only was it the first Men’s Wimbledon victory for Britain since 1936, but it also finally sent Andy to the winner’s circle after a devastating defeat and huge emotional setback at last year’s tournament.

Andy worked harder than ever after his heartbreaking loss to Roger Federer in the 2012 Wimbledon final, but it took more than long hours on the court, intensive training and stellar coaching to finally turn the tide to victory.

A diet consisting largely of raw fish that must be consumed within an hour of each and every match in order to maintain his imposing 6’3″, 190 lb frame.

In order to meet Andy’s physical demand for high quality protein, his staff is instructed to track down a high quality sushi restaurant in every city he plays. He has even been known to bring sushi on ice in a cooler right to the court so it can be immediately brought to him at the end of a late match.

In addition to raw fish, Andy consumes large quantities of red meat, pasta and rice spread over 6 meals each day. Breakfast consists of yogurt and a peanut butter bagel with a protein packed shake.

In total, Andy consumes 6,000 calories a day along with at least 6 quarts of water. He strictly avoids alcohol, processed foods and sugar.

“I don’t actually like junk food these days. I used to love it but, apart from the odd pizza, nowadays I’d prefer to go for a nice meal. If I did win on Sunday sushi would definitely feature in there somewhere.”

Andy is not alone is his predilection for sushi. The Australian Institute of Sport has recommended it in the past for all its athletes. Tennis star Serena Williams along with baseball player Alex Rodriguez are fans as well.

Sushi isn’t just for the young athletes either. The Japanese traditional food may well have fueled golf legend Tom Watson’s shocking run at the British Open in 2009 at the age of 59.

Why is sushi so special? First of all, uncooked fish contains plentiful omega-3 fatty acids in a fresh, unadulterated state. Omega-3 fats promote cardiovascular health and optimal circulation. The raw protein provides the most basic of building blocks for maintaining muscle mass, which can disappear rapidly for a professional athlete who is training heavily.

According Nino Severino, who has coached top British players:

“Andy [Murray] is such a physical player that every time he slams down his foot he is basically ripping his body to shreds. He then needs to replenish the lost protein because that’s a big element of rebuilding.”

The fish eggs (caviar) that adorn most sushi rolls are extremely high in Vitamin D, known to lower inflammation. According to analysis by UBE Laboratories and funded by the Weston A. Price Foundation, a single tablespoon of fish roe contains a whopping 17,000 international units of vitamin D. In addition, fish roe contains vitamins A, K2, zinc, iodine, and the brain supporting omega-3 fatty acid DHA in ample amounts.

Can sushi be of benefit to weekend warriors as well? There is no reason why not. Many scientists believe that sushi is one of the reasons why the Japanese are among the healthiest nations on earth.

Sushi on the Menu as Britain Hungers for a Title

Fascia Blaster: When It Helps, When It Harms!

Endorphin Junkies Beware: Too Much Cardio Scars the Heart