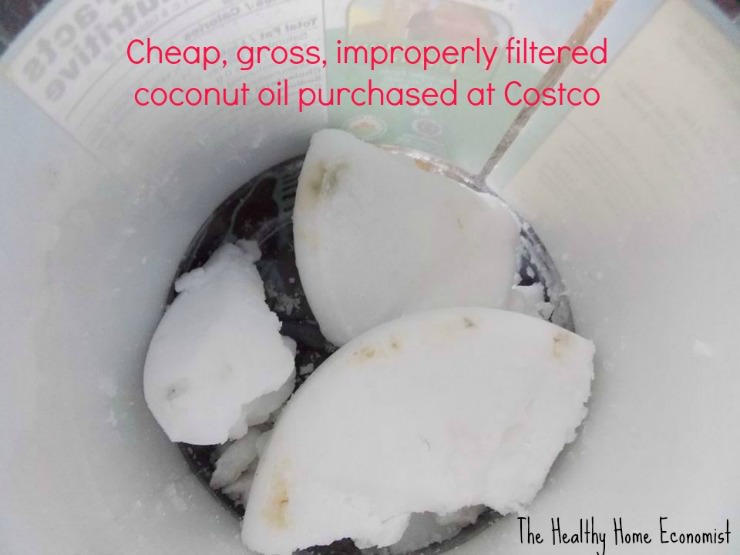 The popularity of coconut oil has skyrocketed in recent years. It seems as though everyone is starting to realize what traditional South Pacific cultures with virtually no heart disease knew for centuries:  coconut oil is one of the healthiest fats on the planet and is a boon to health when plentiful amounts are present in the diet.

Even Dr. Oz recommends coconut oil. When a TV medical doctor is extolling the virtues of coconut oil, you know it has well and truly gone mainstream!

The problem is that good quality virgin coconut oil is not particularly inexpensive. And with more and more budget conscious families demanding coconut oil, the big box wholesalers like Costco have been faced with a dilemma – how best to capitalize on the coconut oil frenzy while keeping the price dirt cheap.

I’ll admit that I’ve been suspicious of the big box wholesaler brands of coconut oil for quite awhile. The price just didn’t jive with the price I knew to be necessary to ensure a quality, pure product.

It seems that evidence is now emerging that my suspicions have been justified. 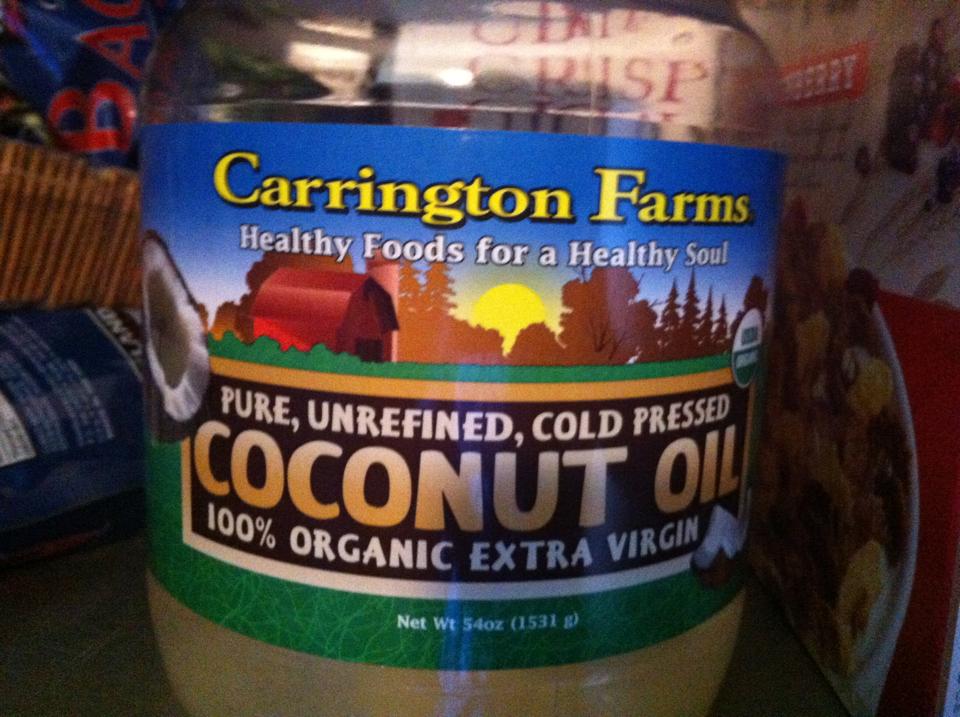 Mary M. messaged me on my Facebook page just yesterday complaining about the big jar of Costco coconut oil (picture above).  She writes:

“I just opened and began using a big container of coconut oil (got it at Costco) that I’ve had for maybe 3 months and it has sat on my pantry shelf (outside in my garage, I live in Texas so it’s gotten hotter than 100 degrees).

It smells like burned marshmallows, or maybe the inside of a pumpkin on Halloween. Since I can’t find any web sites that describe the smell (other than “yucky” and “very, very bad”) for rancid coconut oil, could you please help me out? I can’t stand to put it on my face….but can I still cook with it?”

You don’t want to ever use, cook with, or put on your skin an oil that smells bad!

Mary’s email about her jar of Costco coconut oil raised two big red flags to me. First of all, I’ve been using coconut oil and virgin coconut oil for many years and I have never had it go off, even when kept for a year or two in my garage where the temperature easily reaches a 110-120F on humid August afternoons.

Coconut oil is an extremely stable oil and should never have gone bad such as what Mary M. experienced, provided it is pure, 100% coconut oil and it was filtered properly so that none of the coconut protein was left in the oil.

“… any product that uses the term ‘extra virgin’ and it does not pertain to olive oil is using the term outside its definition… Trying to market something that does not exist.”

Does this mean use of the misleading term “extra virgin coconut oil” indicates an inferior product?  Not necessarily.  It is simply a red flag that further investigation to ensure a quality product is required particularly if the product is found on a shelf at Costco or other large retailer for a price that is too good to be true.

Why Inexpensive Costco Coconut Oil is Likely of Poor Quality

There are a couple of potential reasons why Mary M’s Costco coconut oil went bad.

First of all, it might not have been 100% pure coconut oil at all.

Not pure coconut oil? Not so far fetched. This is what the olive oil industry has been doing for years, blending cheaper oils with extra virgin olive oil and marketing it as pure extra virgin olive oil.  Since the majority of the oil is indeed “pure” extra virgin, they get away with labeling it as such even though other cheaper usually rancid oils are present. However, what restaurants do is even worse. Most use “olive oil blends” for cooking that are actually 75% canola oil and only 25% olive oil. If you ask them what they use for cooking, most in my experience will simply respond “olive oil” even when this is not really true.

If Mary M’s Costco coconut oil had vegetable oils or cheaper hydrogenated palm oil blended in, even if organic and in small amounts, it would be prone to going off sitting in a hot pantry for a few months causing the entire jar to stink after awhile.

Another possibility is that the oil was improperly filtered and is inferior quality coconut oil subject to rancidity as a result.  My friend mentioned earlier who is the owner of a company that sells quality virgin coconut oil had this to say when I asked him about Mary’s coconut oil problem and how it could possibly go rancid:

“The only thing I have seen is during the filtering process.  If they run it too fast or do not change the filters, one can get pieces of coconut (protein) in the product.  You will not see it other than with time you might see a slight change in color on the bottom of the container.  And this product can culture at the bottom of the container and it will have a culture smell.”

Another friend who also owns a company that sells high quality virgin coconut oil had this to add:

“It is possible that it was not 100% Coconut Oil.  However, I suspect that it was just very old oil and not fresh.  Since there is so much demand for Coconut Oil, fresh lots will be sold for money and may not be available at discount stores.”

It’s anybody’s guess, but one thing is for sure.  It was not fresh, high quality Grade A coconut oil. Good quality, pure coconut oil that has been properly filtered does not go bad in a hot 100F pantry even if in a plastic tub.  Cheaply priced coconut oil at a discount store runs the risk of being old, improperly filtered (manufacturer’s defect) and not the best choice for your health.

Is it a high risk?  Maybe, maybe not.  There’s certainly not enough data to confirm one way or the other at this point. As for me, I’m personally not willing to trust a huge corporation to properly source my healthy fats – the fats that build my children’s brain and support their immune function.

The lesson to be learned from Mary’s experience from my perspective is that you get what you pay for whether it be coconut oil or any other food item.  Buying coconut oil at Costco, Walmart or some other big box retailer that bases stocking decisions primarily on low price obtained via buying huge quantities at once is a big risk that what you get is going to be poor quality coconut oil that is either potentially blended with cheap oils or is a Grade B, poorly filtered product. Cheap oil that is subject to rancidity and loaded with free radicals risks your health.

It may look and smell fine when you open the jar, but the real test is does it stay looking and smelling fine in a hot pantry or garage after several months?

You can’t tell just by looking at it or tasting it that is 100% virgin coconut oil that has been properly filtered.

Just like with extra virgin olive oil, the only way to ensure a quality product is to buy from a quality small business, not a big box retailer like Costco that buys large amounts of inventory from manufacturers and dumps it on the consumer market at ultra cheap prices.  While you may get a decent product for a cheap price some of the time, I personally am not willing to take the chance with my healthy fats – the most critical aspect of Traditional Diet – that it will be a quality purchase 100% of the time like what would happen if I bought from a small, trusted producer.

Anything can happen and frequently does as a food item makes its way through the Industrial Food Distribution System!

UPDATE: Since this article was published in June 2013, dozens of other consumers have emailed me with stories of rock bottom priced, poor quality coconut oil being purchased not just at Costco, but other Big Box retailers.  Buyer beware!

Coconut Oil May Not Be Right for You

How to Know If Coconut Oil Is Not Right for You