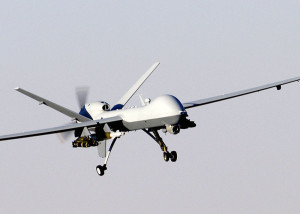 When most people think of drones, they think of the picture to the right.  An unmanned, aerial vehicle used in wartime situations on foreign soil.

While this perception is certainly true, the FAA Reauthorization Act signed into law in 2012 took the concept of drones to an entirely new – and frightening – level.

Predator drones once confined to the battlefields are already being used domestically for a wide range of functions.  According to the Rutherford Institute, at least 30,000 drones will occupy U.S. airspace by 2020, a staggering $30 billion per year industry.

And these drones are not what you think they are.

I was shocked to learn recently that the vast majority of these thousands upon thousands of drones, some already unleashed over America’s skies, are tiny – even nano sized, and modeled after birds, insects and other small animals.

56 government agencies are currently authorized to use drones with 63 active drone sites across the nation.  This includes 22 law enforcement agencies and 24 universities.  The cheap cost of deploying drones compared with manned technologies is a big part of the driving force to quickly adopt drones in a widespread manner.   For example, a manned helicopter or airplane can cost around $600/hour whereas a drone costs a fraction of that at less than $25/hour.

Pandora’s Box has already been opened with regard to drones, and there is no going back so we’d best just get ready to deal with it.

Here’s a rundown of some of the drones already developed according to a recent article by John Whitehead of the Rutherford Institute:

Dragonfly drones.  The US government is using small, aerial surveillance drones in the form of insects.  Dragonfly drones were first reportedly used in 2007 to hover over protesters at an anti-war rally in Washington, DC.   A year later, the US Air Force announced  bumblebee drones that apparently cannot be detected.   The purpose?  To fly into buildings to “photograph, record, and even attack insurgents and terrorists.’”

Hummingbird drones.  About the size of an actual hummingbird, “Nano Hummingbird” drones can fit into the palm of your hand.   Developed by the Department of Defense, it is able to blend in with surroundings, flitting and surveilling as needed.

Black Hornet Nano drone.  Comparable in size to a finch at about four inches long, this micro-helicopter drone is able to capture video footage and relay it along with still images to remote locations even in windy conditions.

Roachbots. Mimicking a cockroach’s covertness and a gecko’s speed, roach drones are 10 cm long running and climbing machines. UC Berkeley developed the little terrors that can perform “rapid inversion” maneuvers including dashing up to a ledge and then swinging around to end up underneath the ledge and upside-down – just like a real roach.

MicroBat drone.  Designed to emulate the movement of birds and other flying animals, the bat drone was created by CIT Group, Aerovironment, and UCLA.

Spy-butterfly drone.  Two large wings are the identifying features of another insect inspired drone unveiled in 2012 in Israel.  Dubbed the  “spy-butterfly”, it weighs only 20 grams with indoor surveillance its primary purpose including public areas such as mass transit stations, airports or even office buildings.   These nearly noiseless butterfly drones are considered ideal for intelligence gathering and are apparently so realistic, that when they were tested, real birds and flies fell behind the bots that were arranging themselves into a flock.

Raven drone. While not as small or agile as other drones, the 4 lb raven drone is currently the most common and is already being used in mass numbers with an estimated 19,000 in the sky already.   It is most useful for seeing around corners and sending footage back to its operators.  Resembling a model airplane, the Raven apparently crumbles like a pile of Legos when it lands.

What the Drones Could Mean for Your Health 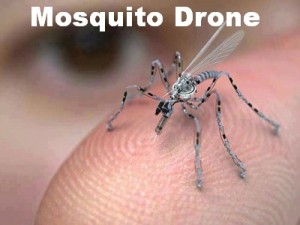 While the drones listed above are shocking enough, the most worrisome of all is the new mosquito drone.

I’ve written before about the unleashing of mutant, genetically engineered mosquitoes, but these mosquito bots are infinitely more concerning.

Mosquito drones are truly an engineering marvel but have the capability to violate your biological rights to a level never before witnessed in human history.

Using a needle-like pincer, mosquito drones have the potential to land on someone to extract DNA or inject tracking devices or drugs without the person’s knowledge or consent.

“Such a device could be controlled from a great distance and is equipped with a camera, microphone. It could land on you and then use its needle to take a DNA sample with the pain of a mosquito bite. Or it could inject a micro RFID tracking device under your skin. It could land on you and stay, so that you take it with you into your home. Or it could fly into a building through a window. There are well-funded research projects working on such devices with such capabilities.”

Would mosquito drones ever be used for such a blatant violation of civil rights? Considering that the government has already shown itself willing to violate the medical rights of its citizens by forcing the use of chemotherapy and other mandated medical procedures, I would say the answer to that question is “most definitely.”

Fortunately, the ability of the human spirit to creatively resist subjugation is always surprising, so no doubt numerous ways will be uncovered to disarm and avoid being violated by these drones as these technologies become more widely used by both public and private enterprises – all in the name of “safety” and “public health”.

Got Asthma? Get Ready to Open Your Wallet

Store Croutons are Gross! Top Salads with These Instead