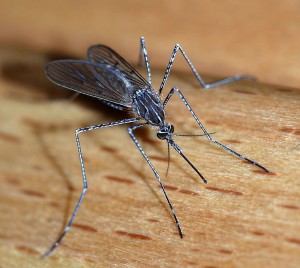 The war against genetically modified organisms expands to include animals as the private firm Oxitec readies a planned release of GE mosquitoes in the Florida Keys as early as January 2012.

The mutant mosquitoes are genetically modified to contain a gene that will kill them unless they come in contact with the antibiotic tetracycline.

This lethal gene is passed on to any mutant offspring when the GE mosquitoes mate with wild mosquitoes.  Any offspring born with this gene will then die before adulthood.  The theory is that over time, the mosquito population will decline due to the lethal gene becoming more widespread.

Residents of the Florida Keys have not been asked to approve this release despite the fact that they would be potential bite victims given that .5% of the to be released mutants are female (the female mosquito is the one that bites).

Two previous releases of the GE mosquitoes (aedes aegypti) occurred in the Cayman Islands and Malaysia.  The Cayman release, performed without residents’ permission, resulted in an 80% drop in the mosquito population compared with neighboring areas that did not have a release.   The success of this release was discussed in a scientific paper in the journal Nature Biotechnology.

Many unanswered questions about the impending release in Florida remain including what will happen with a reduction in the mosquito population in the release area?   Will the void be filled by another insect species inadvertently creating new, unforeseen and perhaps irreversible problems?

What will happen to the balance of the local ecosystem?  Florida bats, for example, depend on mosquitoes for food.   Would such a release have unintended consequences and potentially threaten this fragile mammalian species already in alarming decline?

Who is responsible financially or otherwise if complications with the release develop?

Hopefully, residents of the Florida Keys will demand an open discussion of this impending release in a public forum and that no such experiments be allowed to proceed without their permission.

As with the haphazard and unpredictable spread of GM crops around the globe (feral GM canola growing in ditches in Japan, for example), there is no doubt that the release of GE animals particularly one like the mosquito that has the ability to hitch a ride and move unrestrained into any uncontained area will have far reaching consequences that the scientific mind can only feebly begin to comprehend.

Source: Genetically Modified Mosquitoes to be Released in US for the First Time