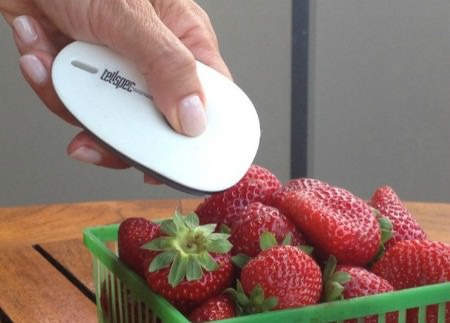 The secret of change is to focus all of your energy, not on fighting the old, but on building the new.   – Socrates

A common topic on this blog is how food manufacturers dupe the consumer with misleading or downright false information on food labels.

“Raw” cheese?  Not so fast. Food manufacturers are allowed to label cheese raw even if the milk was heated to just a few degrees below pasteurization temperature.

“Natural” flavoring?  Sure, if you think beaver butt (castoreum) or neurotoxic MSG is natural.

Ever wondered why store ice cream is so nice and scoopable compared with the rock hard ice cream you make at home? Mmmm. Could it be because it is industry standard (translation: not listed on the label) to add propylene glycol (edible antifreeze) to commercial ice cream to keep it from freezing too hard?

Nowhere is this problem more widespread than with the presence of genetically modified (GMO) ingredients, which are completely unlabeled and yet estimated to be in as much as 80% of processed foods in the United States.

The Biotech industry and Big Food have spent millions upon millions of dollars to defeat GMO labeling laws across North America with the most recent defeat in the State of Oregon late last year.

There are pockets of good news. One town in Maine declared its food sovereignty and the state of Connecticut recently passed the very first GMO labeling law in the United States.

Not to be outmatched, Biotech has taken the fight to Washington, attempting to cut the legs out from under the GMO labeling movement spreading at the local level.

According to the Organic Consumers Association last week:

The Grocery Manufacturers Association, which represents more than 300 food companies, is preparing a petition to the chief U.S. food safety regulator and a push in Congress to require changes in oversight and labeling of new genetically modified foods, an association leader said Monday.

The double-pronged strategy, which the group expects roll out early this year, is aimed at squelching state-by-state efforts to mandate labeling of foods containing biotech crops, and at the same time setting a standard that among other things would authorize GMO foods to be touted as “natural.”

If corporate industry attempts to keep you in the dark about what’s in your food have left you frustrated or disallusioned, take heart.

Technology is going to save the day!

The fact that technology is going to be the white horse riding to the consumer’s rescue is hugely ironic given the fact that technology (biotech manipulation of plant and animal genomes and pesticides/chemicals and other food additives created by an industrialized food system) has caused most of the problems with our food supply in the first place.

As Socrates wisely pointed out over 2500 years ago and which we have all experienced firsthand in recent months with the thwarting of labeling efforts continent-wide, it is better to focus on building the new rather than fighting the old.

Evidently, Isabel Hoffmann and mathematician Stephen Watson feel the same way, as they set out to create TellSpec, a hand-held device that a consumer can use to identify what’s in a food simply by pointing at it and pressing a button.

Hoffman said in a recent interview with Gizmag, ” We want to promote healthier eating, alert those who have allergies and educate consumers by telling them exactly what’s in their food — beyond what the label says.”

The TellSpec works by using a small Raman spectrometer which beams a low-powered laser at the food and analyzes the reflected light waves to identify the chemical makeup of the item with 97.7% accuracy after scanning the food’s surface.

A unique algorithm, ingredient database (3,000 and growing) and a simple smartphone app combine with the spectrometer’s light wave analysis to interpret the results which are downloaded to the user’s smartphone.

“Depending on how transparent the surface of the food is, the more accurate the scan will be. Users must understand that these scans can only go so deep. To scan a Twinkie, the user could do two separate scans for a more accurate reading. One at the surface and then a second in the center of the Twinkie.”

In the spring 2014, 82 beta food testers around the Northern Hemisphere started tellspecing to rapidly increase the breadth and depth of food data in the database.

Shipping of the device to the general public began in August 2014 with a price point of US$320 which includes one year of free analysis of food scans.

The creators of TellSpec have designed the application programming interface (API) to be completely open meaning that it can be integrated and the data fully shared with other applications such as a diabetic or celiac app.

Hoffman explains why, “This is the crowd-sourced element of our clean food revolution. It is literally in the hands of the people. It is they who will truly participate actively in creating a global footprint of food data.The food database is an evolving number — the more people scan, the more the database grows and the more precise the scans become.”

No doubt devices like the TellSpec are set to revolutionize the food industry in the coming years as consumers who care will be scanning their food everywhere from restaurants to farmers markets to grocery stores.

If food manufacturers won’t tell us what they’re putting in our food, no worries – our phones will!

TellSpec Hand Held Scanner Tells You What’s in Your Food

How One Entrepreneur is Revolutizing the Food Industry