Healthy Home Economist / Archives / Green Living / Is Sustainable Salmon Safe? How Does it Compare to Wild?

Is Sustainable Salmon Safe? How Does it Compare to Wild? 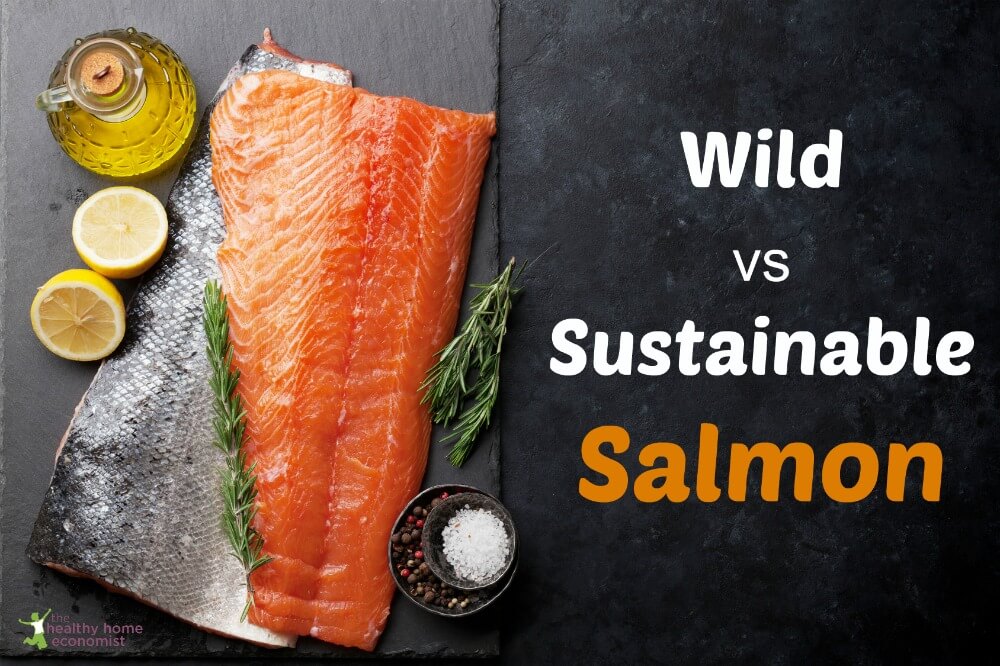 Over the last 10 years or so, the public became aware of the enormous difference in the nutrition of wild salmon compared with farmed varieties.

Since up to 90% of the salmon consumed in the United States is farmed, the viability of a very profitable industry was threatened by this newly educated, activist-minded consumer.

In response, the industry quickly pivoted to the term “sustainable salmon”.

I’ve noticed over the past year or two that much of salmon in health food stores is of the sustainable variety. Finding truly wild salmon seems more difficult than ever.

But does better for the environment mean better for you and your family nutritionally speaking?

What is Sustainable Salmon?

In 2015, the Food and Drug Administration (FDA) approved a genetically engineered salmon for human consumption. You may have seen the GE salmon memes all over social media in the year or two prior advising the public to submit comments to the FDA to reject frankenfish.

Known as Aquabounty, GE salmon is a variety of Atlantic salmon modified with a growth hormone gene from Chinook salmon. This modification makes them grow much faster than normal. (1)

In fact, GE Atlantic salmon can reach adult size in only 18 months. Normally, the process can take up to 6 years or even longer depending on water temperature and food availability. (2)

The biggest concern of environmentalists with Aquabounty salmon is that individuals could escape into the wild, reproduce and eventually threaten the viability of slow-growing wild Atlantic salmon.

To combat these concerns, farming of these GE fish takes place at land-based farms far from the ocean.

This new type of salmon farm eliminates the risk of escapees mating with wild populations.

In addition, the risk of fish waste messing up the marine environment is reduced to zero.

Indoor salmon farms also recycle more than 95% of the tank water, which maintains a cleaner environment. This reduces the risk of disease and minimizes the need for antibiotics and other drugs to keep the farmed fish healthy.

Even Seafood Watch – which in the past warned consumers away from all farmed salmon – is impressed with these landlocked salmon farms. This organization identified indoor raised Atlantic salmon as “Best Choice”, its highest stamp of approval. (3)

While the industry may applaud and give high ratings to sustainably farmed salmon, from a consumer’s point of view, this type of fish is far from a “Best Choice”.

Bottom line, sustainably farmed salmon is nothing but a nutrient-poor fish that is potentially genetically engineered.

While indoor farmed salmon does represent a big leap forward in reducing environmental damage, the fact remains that the salmon is still farmed and eating a by and large unnatural diet.

Worse, some of these landlocked Atlantic salmon farms are raising GE fish. These genetically modified fillets hit the market for the first time in the summer of 2017. It shipped unlabeled to retailers in Canada. (4)

No doubt, most Canadians had no idea they were guinea pigs for the very first GMO animal in the world’s food supply.

Barring any surprises, GE “sustainably farmed” Atlantic salmon will be on the shelves in the United States very soon. As of May 2019, the FDA has approved AquaBounty for human consumption. (5)

We wouldn’t know, though, because the FDA does not require that labels identify frankenfish fillets.

From the reading I’ve done on the subject, the industry is taking great pains to keep the presence of GE salmon in the food supply very quiet.

Any articles seem to focus only on the improved environmental impact of indoor farmed Atlantic salmon rather than the fact that a growing percentage are frankenfish.

Ultimately, smart consumers are going to stick with wild salmon and ignore the sustainable buzzword on seafood packaging.

The fact is that sustainable salmon is little different from the toxic salmon farms of old!

The environmental impact is less, yes. This is great, but the food produced is just as nutritionless. In addition, indoor farms still utilize drugs and antibiotics, albeit at lower levels than before.

Here are the 5 most glaring differences between “sustainable” and wild salmon. (6)

In conclusion, just say no to sustainable salmon.

The food industry needs to learn that using buzzwords to sell an undesirable product is ultimately not going to fool an educated consumer.

Once you’ve got a good source, try cooking your salmon fillets in a toaster oven for perfect results every time 🙂

(1, 4) Salmon becomes the world’s first genetically modified animal to enter the food supply
(2) Life Cycle of Atlantic Salmon
(3) You Won’t Believe the Source of the World’s Most Sustainable Salmon
(5) GE Salmon Approved for Human Consumption by the FDA
(7) Why Farmed Salmon is Toxic Junk Food