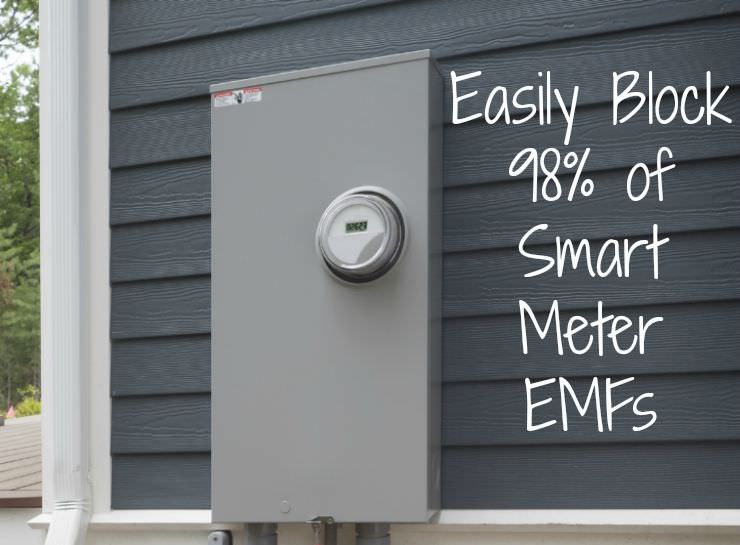 I cannot tell you how relieved I am to write this post because at long last I have a good answer for those of you who have a smart meter installed at your home against your will.

Smart meters are being used by the majority of utility companies today, and while a convenient cost cutting measure for them, they are a concentrated source of electromagnetic radiation (EMF) for consumers. Smart meter radiation is of a similar frequency to WiFi, cordless phones and cell phones. However, while of a similar frequency to these other devices, smart meters transmit at much higher power and concentration so much so that consumers are starting to note chronic health effects from having them installed such as frequent headaches, inability to concentrate, lack of quality sleep, anxiety and more.

As awareness of the dangers of excessive EMF exposure grows, more and more people are realizing that the smart meter attached to their house is contributing in a big way to their health challenges especially if the smart meter is installed near the bedroom area of the home as these devices transmit on a 24/7 basis.

I’ve been blogging about the dangers of smart meters for several years, and until now the only concrete answer I had for people was to navigate the utility company bureaucracy and attempt to get it removed in favor of an old fashioned analog meter. Unfortunately, this approach is proving nearly impossible for the majority of people as the utility companies don’t really seem to care much about the health of their customers. Even worse, some power companies are flat out lying to their customers by insisting the meters are not smart meters at all, but less problematic AMR meters (Automated Meter Reading) which transmit one-way for very short distances and are not connected to the SmartGrid. While not true for all power companies, at least two that I know of are definitely employing the deny and divert approach when dealing with smart meter inquiries and complaints from their customers.

For those stymied by the power companies, clunky home approaches for blocking the smart meter EMFs were an option such as placing aluminum foil or some other form of metal shielding on the inner wall where the device was installed. This solution proved impractical in many cases and didn’t work very well for some people in alleviating symptoms. This is because the metal reflects rather than blocks the smart meter radiation which can unintentionally redirect or concentrate it to an area you don’t want it to go.

At Last! A Solution to Smart Meter Radiation

While reflecting smart meter radiation has proven to be an unreliable approach, there is a new device available that very effectively blocks it instead.

The device is called a Smart Meter Guard (check it out here) and it has been proven to cut  98% of the radiation from a smart meter! Better yet, the power company won’t balk if you use it as long as you don’t break the security seal (don’t EVER do this!). My friend Beth from Minnesota emailed me about it recently as she was informed about this new device by a building biologist who works for the company Intentional Environment.

How the Smart Meter Guard Works

These products work using a technology called a “Faraday cage”, named after the English scientist Michael Faraday, who invented them in 1836.

A Faraday cage is a metal enclosure made out of a conductive material (like metal) or a mesh of the same type of material. It serves to block external electric fields by channeling electricity through the mesh, providing constant voltage on all sides of the enclosure. Since the difference in voltage is the measure of electrical potential, no current flows through the space. This scientific phenomenon is applied to protect electronic equipment from lightning strikes.

Here’s how a Faraday cage works with regard to a smart meter. Your electrical utility box is made of and completely surrounded by metal. All of this metal is grounded and poses no health threat. However, the glass part of the smart meter is not grounded and this is where the radiation is transmitted and it is not straight out from the glass. It radiates outwardly in all directions including backward into your home. Once the Smart Meter Guard made from 316 stainless steel mesh and stainless steel support ribs (made in the USA) is installed, it covers the glass portion of the smart meter which is not grounded effectively containing 98% of the high frequency radiation so that it cannot escape even from the backside of the smart meter.

The 1% to 2% of the radiation that is not contained is sufficient to transmit a signal for about a mile or so (versus 30 miles without a Smart Meter Guard). Since most power company data receiving stations are less than a mile away, chances are very good that the utility company will continue to receive the signal it needs. As of this writing, no complaints have been received by the company that makes the Smart Meter Guard that power companies are not getting the signal from homes with a Smart Meter Guard installed.

How a Smart Meter Guard is Installed

The great news is that a Smart Meter Guard requires no assembly and is so simple to install that even non-handy people (like me) can do it. And, as long as the security seal is not broken on the smart meter, it is totally legal to install it.

The cover will fit 99% of the smart meters on the market today. All you need is a screwdriver to install it, and the 316 stainless steel construction means that the Smart Meter Guard will not rust or corrode and is guaranteed to last 15 years.

The manufacturer of the Smart Meter Guard reports on its FAQ page that there are 3 types of electrical smart meters currently being used. Types 1 and 2 have the metal rings visible on the outside of the utility box. Type 3 has the metal ring at the base of the smart meter and the ring is covered by the metal lid of the utility box. While only about 4% of electrical smart meters are Type 3, if you find that you have one of these rare smart meters, simply request a rubber spacer (free) with your Smart Meter Guard so that it will easily be adjusted to fit this model.

Testing to Make sure Your Smart Meter Guard is Working

The only way to measure that the smart meter radiation is being blocked by the Smart Meter Guard is by using a High Frequency analyzer tuned for the 900 MHz range.  The analyzer will measure the power density being emitted from smart meters. While most of us don’t have such a device for testing, this video demonstrates how the Smart Meter Guard drops the radiation down by at least 98% and how this is effective even within the house on the backside of the meter.

The reality is that technology is changing faster than we can adequately assess the long term health impacts. Proactive consumers tend to not take any chances with highly concentrated EMF sources like smart meters and will carefully consider the simple steps required to protect themselves and their families today.

The only problem that the Smart Meter Guard does not solve are the privacy issues that utility companies violate when they monitor and track your electrical usage habits on a 24/7 basis. If this is a concern for you, then by all means continue to seek replacement of your smart meter with an analog meter. In the meantime, however, at least you won’t have to suffer any negative health effects from smart meter radiation as long as a Smart Meter Guard, Smart Meter Cover, or Smart Meter Shield is installed.

More Information About the Health Dangers of Excessive EMFs